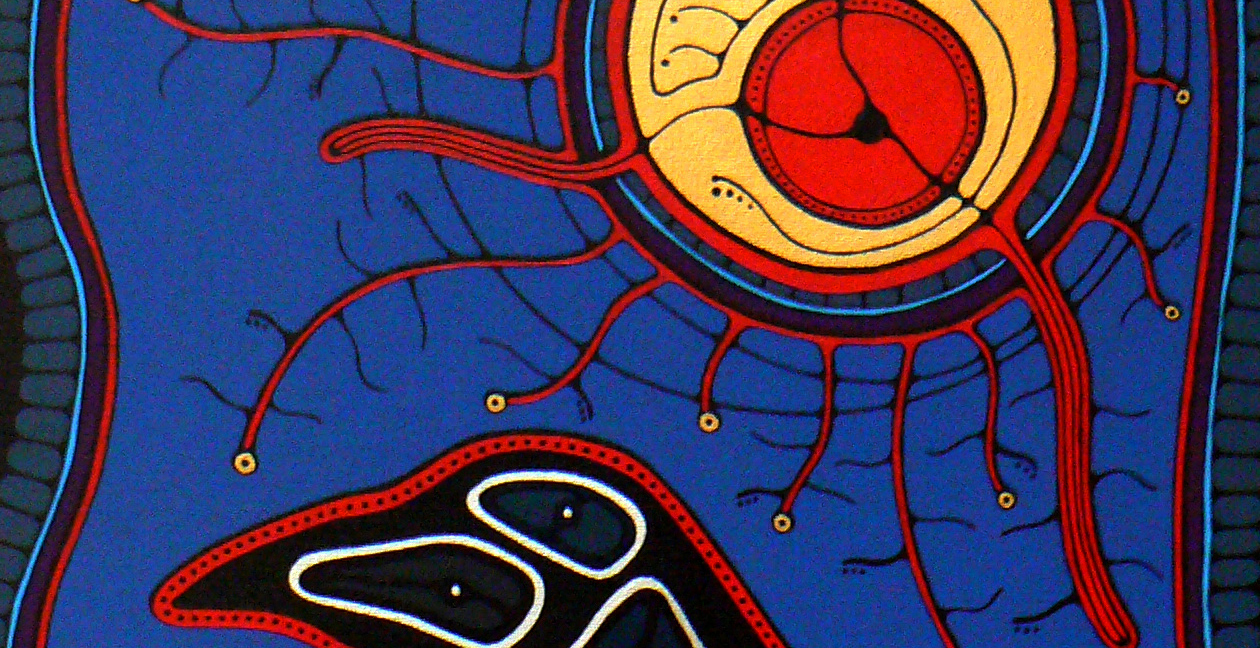 The beautiful art that is featured on the cover of the November issue of Alberta Native News is a detail from a painting entitled Dream Raven by the very talented Jessica Desmoulin. She and gifted potter and author Dianne Meili are sharing center stage, on exhibit at Bearclaw Gallery from November 15 – December 14, 2014. The theme of the exhibit is Animal Speak and both artists have been heavily influenced by the spirituality and beauty of the animal world. 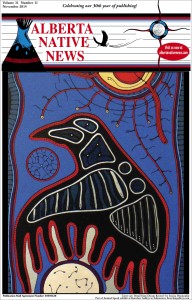 Author Dianne Meili is well-known and highly regarded for her work in journalism and for her exceptional award winning non-fiction book about Aboriginal Elders, entitled Those Who Know. This outstanding book which gives treasured insights into the thought and experiences of Elders was first published in 1991 and then updated and rereleased in 2011.

Meili, of Cree and Metis descent, has also been “playing in the mud” for the past five years, creating pottery that begs to be picked up and touched. She creates sculpture and decorative bowls intended to make the beholder feel a connection between themselves and the Creator, as well as all living things – animal and human. Spending hours shaping and carving each piece, there is a true symbiosis between Dianne and her medium. She is both respectful of, and thankful to, the powers that allow her to share her creative talents. In exchange, it seems she has been rewarded with clay that yearns to hold her intensely animated shapes and glazes and firings that give a unique finish to her spiritual vessels.

In her own words, Meili explains the connections among animals, humans, and life itself. She states, “Elders tell stories of a time when there were no boundaries between people and creatures. Animals and humans spoke, and always the divine revealed itself through them. At some time in our history we “civilized out” a part of ourselves that once maintained a dialogue with a greater knowing. We stopped using whatever it was that connected us to animals and nature, and now we seem to be standing outside the circle of life. Animals are powerful symbols, surrogates for the human psyche; their totemic power endures.” 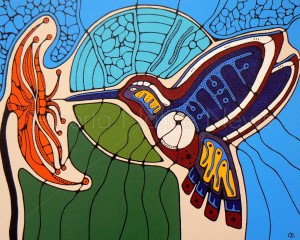 Jessica Desmoulin is an Ojibway artist of the Pic River First Nation born in Saskatoon in 1978. Her art is bright and colourful with an assortment of animal themes consistent with the new Woodland style. Among other works, she is well known for her design of the logo for the Spirit Runner app which promotes positive lifestyles for Aboriginal youth.

After the birth of her second child, Desmoulin developed an illness that left her unable to work outside the home. Jessica took this opportunity to approach her art seriously and began to paint canvases and occasionally buffalo skulls. She credits the love and support of her family for allowing her the chance to explore her love of art.

About her connection to Nature and the animal world Desmoulin states, “I try to put myself into my art through the use of intuition and emotion. I use the colors that are mainly natural tones and earth tones. I also like to use silver, gold and copper because it is like Mother Nature’s jewelry to me. I am greatly influenced by nature. When I was young I used to enjoy walking through the bush and sitting under a big old spruce tree where I would daydream about my future and the things I wanted to do in my life. In Sparwood I could look outside my window and see the mountains. I was also very lucky to see a lot of wildlife in its natural environment. All of the animals I paint have special meanings to me. The swan represents mother, keeping its young safe and warm through all stages of their life. The bear represents protection, being strong not only in body, but in spirit. The animals in my paintings quite often reflect my family and loved ones.”

For more information and to view the new works by Dianne Meili and Jessica Desmoulin visit www.bearclawgallery.com.

Be the first to comment on "Featured Artist for November 2014: Jessica Desmoulin"