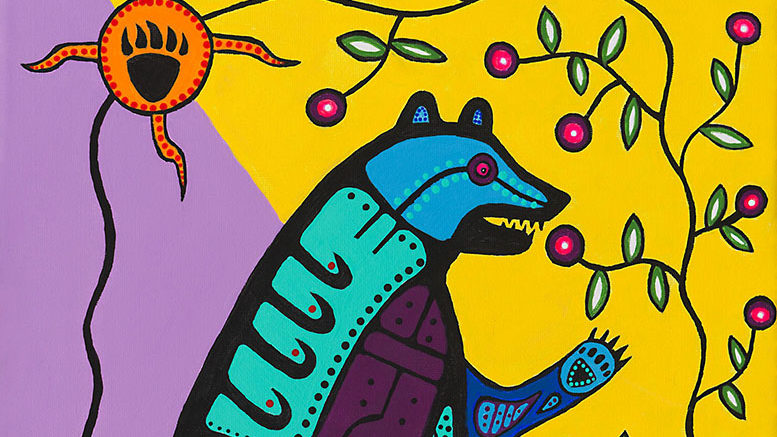 (ANNews) – The vibrant image on the cover of this month’s Alberta Native News is “Deeper Roots” – a beautiful painting in the woodland style of Indigenous art by artist Autumn Whiteway.

The image was a stream of consciousness for her, explains Whiteway, intended to depict bears and their connection to the ecosystem in a vibrant way. The berries in the image are symbolic of any berry “but since around here saskatoons are so important for bears, the berries in the image are saskatoons.” A digital version of the image is featured as a greeting card for the Solstace Boxes produced by the Indigenous Colouring books – Colouring it Forward. 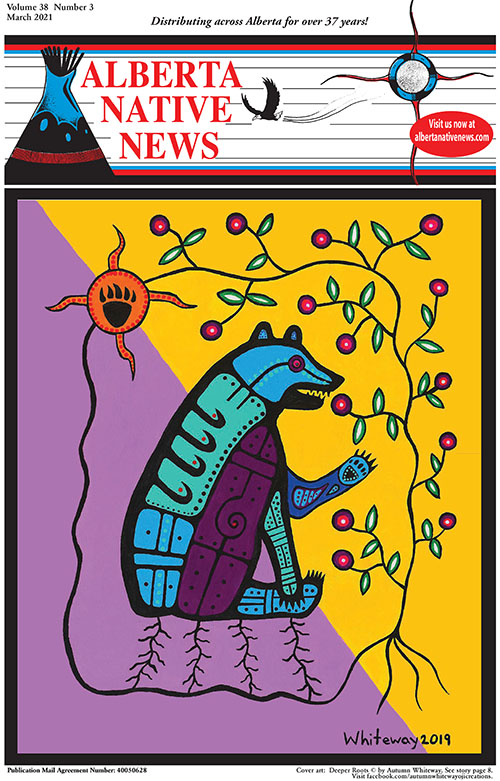 One of the most important qualities of any artist is patience: patience with your skill, with the muse, with yourself. Autumn Whiteway practiced infinite patience, waiting until she finished her third university degree in 2018 to focus on her artistic self.

Whiteway’s father is a Saulteaux Metis whose family of fishermen are from Berens River First Nation. “I’ve been [in Alberta] all my life,” begins Autumn, “but moved to Winnipeg for a couple years to do my Master’s degree at U of Manitoba.”

Autumn enjoyed Winnipeg only after coming back to Alberta, “There’s so much culture and history there but I was dealing with some racism from one particular professor so it wasn’t a happy time for me.”

So many emerging artists had little cultural practice while growing up, with some having no acknowledgment of their heritage. This was only partially relatable to Autumn’s experience.

“From the time I was a child, I’ve known as long as I can remember that I’m Indigenous. My mom is a settler and apparently has Mi k’maq ancestry but she was always very open and quite proud for me. So I learned right from the time I learned to talk that I was Indigenous.”

Autumns’ family were proud of their heritage but did not actively practice cultural teachings. Even as a young girl, however, this did not stop Autumn from being focussed on her heritage. “I would wear my beaded thunderbird necklace everywhere and my beaded barrette,” she enthuses.

“I was so proud. I did deal with some racism from some kids when I was growing up but my Dad’s father was a residential school survivor and I know some of my dad’s siblings were not proud of their heritage because I think they got harassed growing up. Some of them liked to hide that they were indigenous. I was always very proud but I also never received a lot of cultural teachings at home so that’s something I was searching for my whole life.”

Since 2018 Whiteway has been making up for lost time. “Once I finished ten years of university, I started focussing as much as possible on as many cultural teachings and crafts as I could,” Whiteway explains. “It has really snowballed, I’ve done well in that short time as an artist, with artist residencies and attention for my artwork and getting different projects.”

When asked how the creative spark reveals itself, Autumn confesses a higher purpose is her inspiration. “Often I am thinking about Indigenous issues and it usually sparks from that. How can I highlight certain Indigenous issues in an artistic way?”

Whiteway describes having two styles. “I do the woodland style of art which is really common among Ojibwe and Cree people and that was grandfathered by Norval Morriseau and I also do more digital type art and photography which really focusses on Indigenous issues.”

Autumn focusses on how those images can create a dialogue to Indigenous and non-Indigenous alike. “Currently, I’m working on something now on cultural appropriation and just need to build some props for them. Also I’m working on [a piece] on the diabetes epidemic among Indigenous people.”

Another of her images was debuted in the March 21 edition of Alberta Native News titled “Goose Takes the Bad Away.” 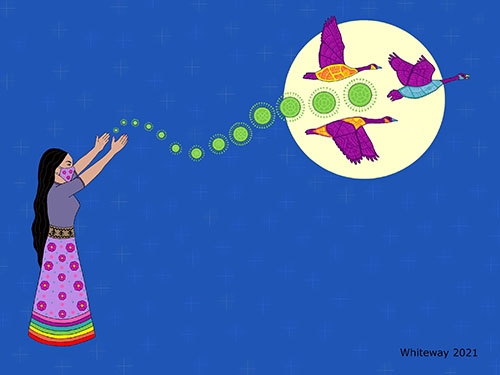 “Goose Takes the Bad Away” by Autumn Whiteway

“It’s based on my conversation with an Elder who told me that his mother and grandmother use to run outside every time they heard the geese honking and they would pray for the geese to take the bad away. This piece is a response to the pandemic in which she is sending the Covid away, especially to keep the Elders safe.”

Having travelled extensively through her academic career, Whiteway has found her travels influencing her art in subtle ways. Aside from encouraging emerging artists to travel, Autumn feels there are many opportunities emanating from grass roots community initiatives throughout Alberta.

“Particularly in Alberta there are a lot of opportunities for emerging Indigenous artists. For artists that can put their work online it’s a great opportunity now, especially during Covid; you can quickly gain a lot of momentum for your artwork, especially if you take advantage of social media platforms.”

Whiteway also suggests learning when there are calls for artist initiatives. “When the pandemic slows down there are a lot of Indigenous markets in Calgary and Edmonton. In Calgary there is a very supportive little art scene, like a little family. I know from a lot of artists in Edmonton, that it really does feel like a community [with] a lot of opportunities to grow your business.”

One of Whiteway’s upcoming initiatives is a second showing of the Indigenous Motherhood and Matriarchy Exhibitions at Calgary’s C Space the entire month of March. This show will include 23 artists and 41 pieces, including representation from two-spirit artists.

Whether she’s in the Middle East studying the Bedouin people, curating art shows or getting her young son through teething, it is clear Autumn Whiteway is a force of and for nature, community and justice and we are stronger for it.

Be the first to comment on "Feature artist for March 2021: Autumn Whiteway"