The exquisite artwork that appears on the cover of the January 2015 edition of Alberta Native News is entitled Nimpkish Sunset by Northwest Coast artist Andy Everson. It is among the most calming and tranquil pieces of art to ever grace our cover. The colours are vibrant, yet serene and they meld into each other perfectly to showcase the setting sun against a backdrop of  a blue heron flying amidst a cluster of statuesque trees. It is a tribute to the artist’s culture and history.

Born in Comox, BC in 1972, Andy Everson was named Na̱gedzi after his grandfather, the late Chief Andy Frank of the K’ómoks First Nation.  Influenced heavily by his grandmother, he has always been driven to uphold the traditions of both the K’ómoks and Kwakwa̱ka̱’wakw First Nations. In this regard, Andy has pursued avenues where he can sing traditional songs and perform ceremonial dances at potlatches and in a number of different dance groups.

Pursuing other areas of traditional culture also led Andy to complete a Master’s degree in anthropology. This work provided him with a
background in linguistics which subsequently inspired him to create a company, Copper Canoe, Inc, that specialized in the creation of 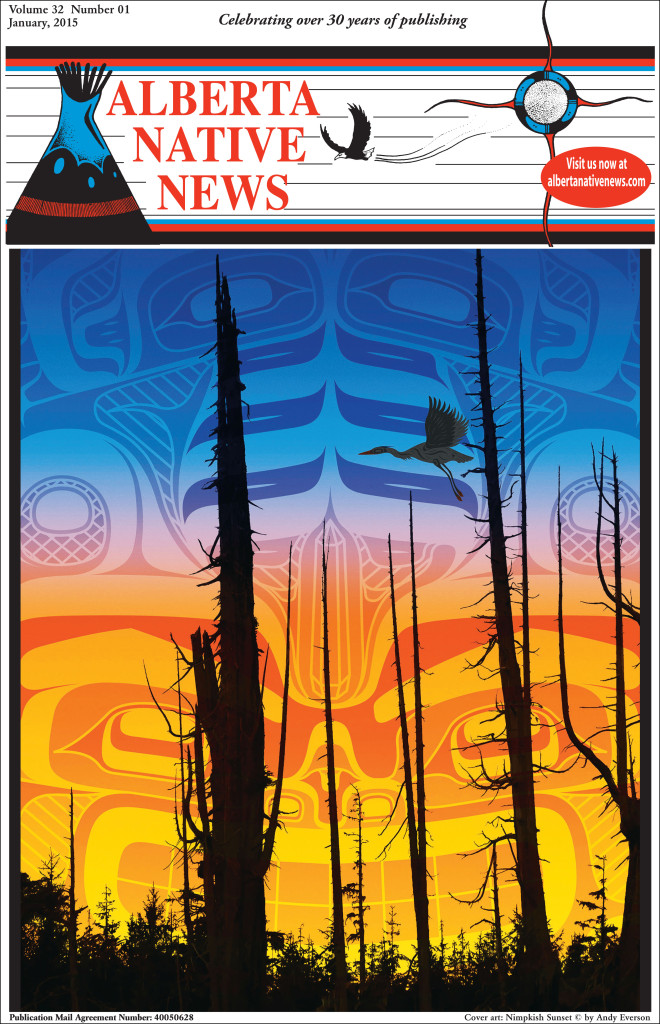 Andy feels that his artwork stands on par with these other accomplishments. Although he began drawing Northwest Coast art at an early age, Andy’s first serious attempt wasn’t until 1990 when he started designing and painting chilkat-style blankets for use in potlatch dancing. From these early self-taught lessons, he has tried to follow in the footsteps of his Kwakwa̱ka̱’wakw relatives in creating bold and unique representations that remain rooted in the age-old traditions of his ancestors. The ability to create and print most of his own work has allowed Andy to explore and express his ancestral artwork in a number of contemporary ways.

For information and to view a wonderful collection of art work by Andy Everson visit
www.andyeverson.com.

“In ancient times, many of our first ancestors appeared, not as humans, but as animals, birds and creatures from the sea. In the early myth time, they could remove their animal skins and walk as people upon the land. One such ancestor from the ‘Na̱mg̱is (Nimpkish) was named ‘Na̱mukustolis who first arrived as a great blue heron and soon transformed himself into a human.

“He was warned that there was going to be a great flood that would cover the earth and that he should wait for an enormous sea monster named ‘Na̱mx̱iyalegiyu to rise from the depths. The sea monster took ‘Na̱mukustolis under the water in order to protect him from the floods. When the waters had receded, Na̱mx̱iyalegiyu put ‘Na̱mukustolis onto the shore where he started the first Nimpkish village called X̱wa̱lkw and became the first ancestor of the ‘Na̱mg̱is people.

“Later ‘Na̱mukustolis met Ḵ̓aniḵilakw, the Transformer. In a great battle of transformation, the two pitted their skills upon one another, transforming each other into ducks, mountains and kingfishers. Resigned to this stalemate, Ḵ̓aniḵilakw travelled on. Cognizant that Ḵ̓aniḵilakw might return, however, ‘Na̱mukustolis wondered what he should transform himself into for protection.

“At first he thought he should become a stone, but he quickly realized that stones will eventually crack. Then he thought he should change into a big tree, but it occurred to him that trees will gradually fall and rot away. Eventually, he decided that he would become a great river and flow until the end of days. ‘Na̱mukustolis then took on the name Gwanalalis to reflect on this desire. Ḵ̓aniḵilakw could hear his thoughts so he returned and pushed on the forehead of Gwanalalis. He fell to the ground and became the great Nimpkish River, Gwa’ni, and was filled with fish so as to provide for his people.”

Andy further explains, “In October of 2011, I was given the name of the great grandson of ‘Na̱mukustolis, Ḵ̓wa̱mxa̱laga̱lis. My great-great grandmother’s eldest brother, Fred Innis, also held this name. He carried a talking stick representing the great blue heron and held the winter dance name, Gwanalalis. All I can reflect on is that we have a history that is truly as beautiful as any sunset….”

“Nimpkish Sunset” is a limited edition print using the giclée method of printmaking. This print was released in July of 2013 and printed by Andy Everson at Copper Canoe, the artist’s own studio in Comox B.C. A total of 109 prints bear the title “Nimpkish Sunset” and are signed by Andy Everson: 99 in the primary edition bearing the numbers 1/99 through 99/99; 9 Artist’s Proof; and 1 Printer’s Proof. The acid-free Moab Entrada 100% cotton rag paper measures 17 x 22 inches. Image size measures about 13.3 x 20 inches.

Click here for information about purchasing a limited edition print by Andy Everson.

For a related article read about Andy Everson’s designs on a minted Canada coin set.