The striking art that is featured on the cover of the April issue of Alberta Native News is a detail from a painting entitled “To Dream the Bear” by the very talented Jason Carter. His art will be on exhibit at Bearclaw Gallery in Edmonton from April 18- 30, 2015.  The theme of the exhibit is To Dream the Bear and it features a series of new sculpture and canvas works. 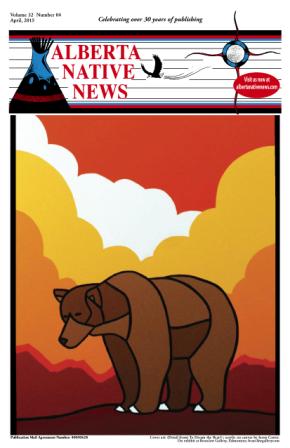 Jason Carter is one of Canada’s most exciting and accomplished contemporary Aboriginal visual artists, celebrated for both his paintings and his carvings. In describing the current exhibit, he explains that the bear is a strong and powerful symbol for Native Americans. There are a multitude of ways in which Indigenous people honour the bear across North America. It’s seen as a symbol of motherhood, courage and strength; as a brave and true protector and as a healer. Bears also solicit, in dreams, a variety of flights of fancy. There is no end to what a person can dream of when they lay their head down and conjure the spirit of the bear.

“This is exactly what many Indigenous people did on the eve of something big, some major threshold in their lives; be it a hunt, or creating a family or even something as flighty as learning to dance!”  notes Jason. “They would lay their heads down for sleep in hopes that a bear might present themselves in a dream.”

This show is a celebration of these dreams, he adds. It gives homage to the bear, which he explores through such stone as Canadian Soapstone, Wonderstone, Alabaster and brilliant bright bold acrylic on canvas.

“This concept has been a terrific inspiration to me,” says Carter. “The idea of laying down to sleep and willing the dreams of bears to unfold is a wonderful image from which to leap. I believe that many of us lie down at night, with the desire to rise again with success in our forecast, be it on a hunt or in our everyday modern lives. Being an artist who divides his time equally between painting and carving, I have been gifted the opportunity to express myself through two mediums, stone and canvas, and both I approach with humor and optimism. As a contemporary Aboriginal artist in pursuit of becoming my true authentic self (in this ever evolving culture), I am continuously using my gift to create new stories inspired from traditional characters with my stone and canvas. I seek inspiration from the past as I create a bold and colorful future.“ 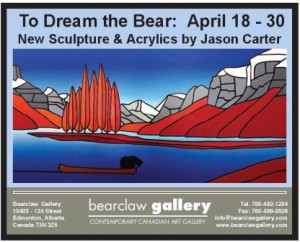 Jason, a member of the Little Red River Cree Nation, is widely acclaimed across Canada for his clean lines, bold imagery and bright colours. He was the only artist in Alberta to have had a feature showing at Alberta House on Alberta Day at the Vancouver 2010 Winter Olympics, and as such, was publicly acknowledged by the Minister of Culture at an International Press Conference kicking off the event. His work has been acquired into dozens of private collections (The Government of Alberta, The City Of Edmonton, AFA, Rogers Media, Syncrude, The Shaw Art Collection, The Regional Municipality of Wood Buffalo to name a few) as well, he has had several exciting public shows, including the Royal Alberta Museum, Art Gallery of Alberta, The Art Gallery of Calgary and the Indian and Northern Affairs Public Art Display in Ottawa, Ontario.

Jason has been commissioned by the Art Gallery of Alberta, The Canada Council for the Arts, The Alberta Foundation of the Arts, The Edmonton Arts Council, The Works International Visual Arts Society, The Society of Manufacturing Engineers of Canada, Winter Light Festival, Syncrude Canada, The Government of Canada and most recently, The Edmonton International Airport to create a 100ft x 7ft permanent installation for the new EIA which opened Summer 2012, with an expected viewing of over 1 million people per year.  He is currently working with The Wood Buffalo Regional Municipality again, building and installing a 12-ft sculpture, and with The City of Calgary on a giant installation to be announced late 2015.

“You are here valley of the ten peaks” by Jason Carter

He created permanent murals for the Amiskwaskahegan (Beaver Hills Park) in Edmonton and was one of three artists part of the LRT/SOUTH Extension beautification project. He was recently celebrated as ‘Emerging Artist of the Year’ at the Mayor’s Evening of the Arts in Edmonton as well as Avenue Magazines Top 40 Under 40.

Jason illustrated his first Children’s book April 2011, “WHO IS BOO: The Terrific Tales of One Trickster Rabbit” inspired by his first carving of a rabbit which he called ‘Nanabozho’ (inspired by the Ojibwe trickster character). Since then, “WHO IS BOO 2: The Continued Adventures” has been published and “WHO IS BOO 3” is expected to be released in 2015.

Be the first to comment on "Featured artist for April 2015: Jason Carter"