(ANNews) – The stunning art on the cover of this month’s Alberta Native News is “Han” by world renowned artist Alex Janvier  – part of “The Healing Language of Alex Janvier” exhibit at [email protected] until November 20 in Sherwood Park.

Curated in partnership with the Janvier Gallery, this exhibit features paintings and sketchbook drawings that reflect Janvier’s experiences within Canada’s residential school system. 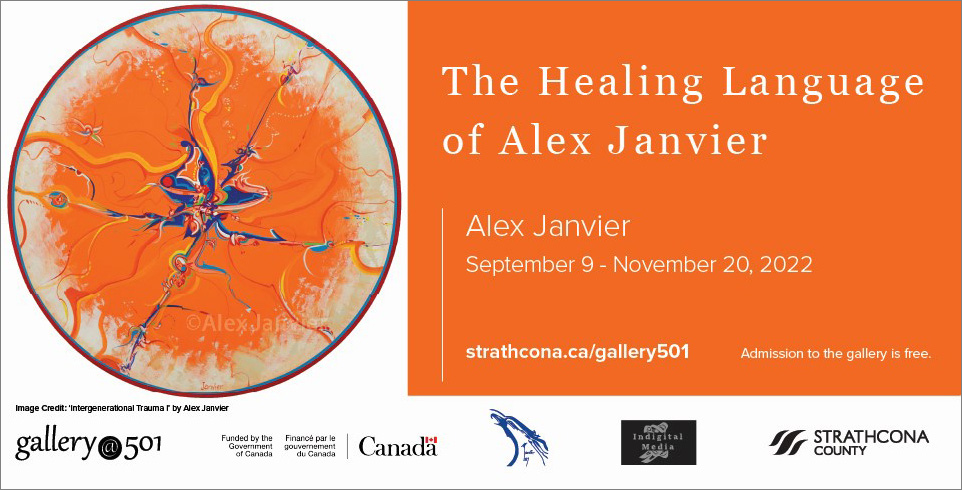 In collaboration with Indigital Media and [email protected], and with funding from Canadian Heritage, Alex and the Janvier family have created powerful video and audio works to complement the exhibit. Through sharing Alex’s impactful narratives, more light will be shed onto the history of residential schools, the lasting impacts for those who experienced them and their families, and the need for calls to action, connection and understanding.

A survivor of the ignoble Indian Residential School system, Alex Janvier has been on a long healing journey to dispel those lingering, trauma-induced demons that have burdened him far too long.

The 87-year-old icon of Canada’s art world is now sharing his story of loss, isolation, trauma, abuse, pain and loneliness through an era that most survivors would much rather forget and put behind them altogether. 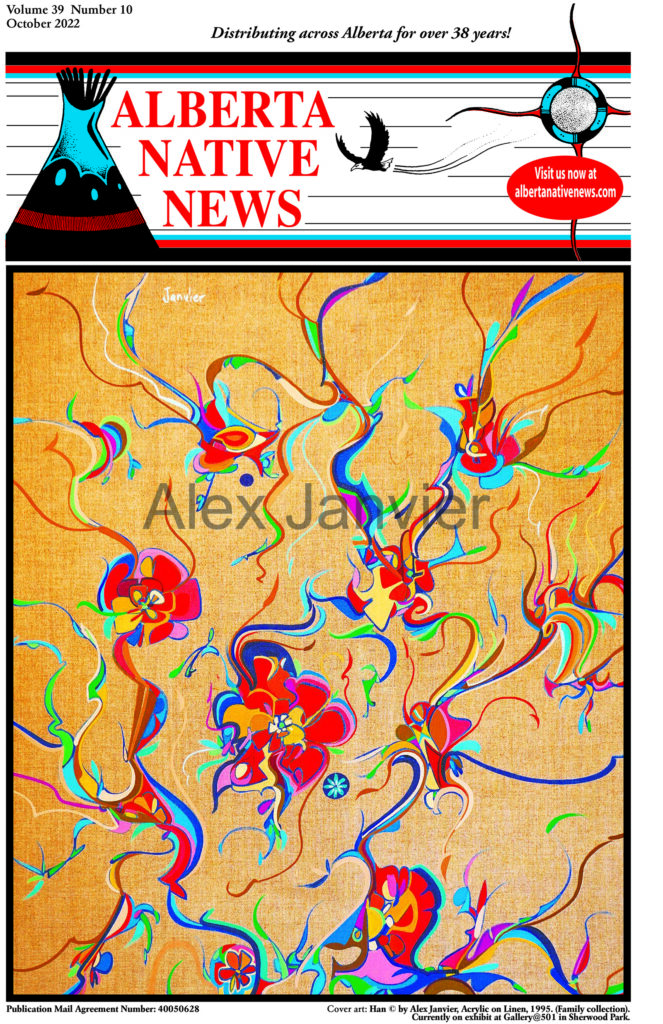 Brilliant artist that he is, Janvier has stepped forward to unabashedly assemble and exhibit a remarkable group of his paintings that address the trauma. Of these a good number have never been exhibited as they have been part of the private Janvier family collection.

Born in 1935, Alex was spirited away from his home on the LeGeoff Indian Reserve at age eight and thrust into the Blue Quills Indian Residential School near St. Paul, Alberta. For him, his world came to an abrupt and harsh existence. In thinking back to that time, his most striking memories are of how severely those notorious institutions stripped him and his people of everything and isolated them from their parents, families, culture and language. Throughout his life, those memories have lingered with him and gnawed at him to no end. The system not only ripped him from all that, but also attempted to erase his identity.

As far back as he can remember, Janvier always harboured a special love for art. He credits his first mentor, Carlo Altenberg, with teaching him such basics as drafting and the dynamics of positive and negative spatial relationships and the mastering of colour.

He struggled with identity and residential school memories. Nonetheless, young Janvier managed to persevere. He graduated with honours from a formal art program at the Alberta College of Art in Calgary and then instructed the subject at the University of Alberta.

In the meantime, he developed his own unique and distinctive art style – what became his “signature style” of curved and flowing lines that separated him from his contemporaries in the Indigenous art world and soon after, he was welcomed into the exclusive company of what would become the 1972 Indian ‘Group of Seven.’

Fast forward to 2022 and we find Janvier, now in his twilight years, one of the two surviving members of the group. Over the past 15 – 20 years Janvier has been honoured with numerous commissions, awards, and recognitions. He’s also been gifted with several Honourary Doctorates, an Order of Canada, Governor General’s Award, Alberta Award of Excellence, lifetime achievement awards, and more. In addition, he opened his own gallery in 2003 at Cold Lake, Alberta.

That said, the Janvier family, in collaboration with Sherwood Park’s [email protected], have developed a commendable reflection of Janvier’s works that stand out in addressing healing and reconciliation.

Currently on display until November 20, the exhibit is a powerfully touching and emotive collection that’s been largely garnered from Alex and the Janvier family. It consists primarily of art pieces that address the residential school system, Alex’s years and experiences in that submissive and colonialistic institution and its subsequent impact on him and fellow survivors.

Thanks to a complex cross-section of Alex’s works in varying mediums, colours, tones, messages and expressions that beckon to a captive audience, the exhibit is one that will both move and educate viewers from all walks of life.

All the images are labelled with many of them including descriptions of the meaning behind the art. For example, the 1990 ‘Opposed Cry’, tells of how the school survivors longed for parents, Elders, culture, history and stories, as well as what it was like to have the English language forced upon them.

Then there’s ‘Why Me?’ which smacks strongly of discriminatory attitudes and behaviours of the school’s staff, imposed “Euro-Canadian thinking” regarding values and beliefs that were programmed to strip the red from the Indian and bring out the “white inner being”. Thus, society developed the term “apple Indian” to describe them being red on the outside but white on the inside. And, so, many were “left wondering, Why me?”

Overall, Alex’s works are a reflection of his association with the schools, the survivors and the trauma they experienced and had no say or control over, due to the overpowering indoctrination process which, emphatically, tore apart the children’s values system, habits, and behaviours, making many of them into “apples” and propelling many into the depths of low self-esteem, self-identity, despair, alcoholism and drug abuse.

In his depictions, there is an application of differing textures, soft colour tones, bold and bright colours, cross-hatch designs, curved and gracefully flowing lines, cultural and historical undertones.

Throughout is the message that is represented in each piece of art. Stories of loss, of anguish, of pain, helplessness, discrimination, segregation, and so much more.

One really must experience this exhibit as it has so much to offer. Indeed, the artist Alex Janvier, demonstrates why he is an art master deserving of the highest accolades.

Additionally, it is such an honourable thing he does in sharing not only his art, but his deeper self – his personal life, loves and hurts. And his art with its messages and stories are extended not just locally or regionally, but internationally, globally …. commanding recognition of him as a world-renowned treasure.

With this amazing exhibit, the master artist is also contributing to the journey of healing and reconciliation which is a huge contribution to the world around us.

From the Janvier family come the following remarks: “The meaning we are sharing is that Indigenous people are people and need to be treated as such. For much of Canadian history, they have not been given basic human rights, and even today, they have not been given clean water. And this is the truth of their history. And much of the policies of Indian Affairs have led to intergenerational trauma which is often misunderstood by Canadians.”

[email protected] commented: “We are grateful to Alex and the Janvier family for sharing these powerful artworks with this community, and for their warmth and trust in collaboration on this exhibition.”

In giving Alex Janvier the final word, he once noted, “What I love about art is that it is what I am. It makes my spirit and my spirituality complete.”

The Janvier exhibition at [email protected] runs until November 20, 2022. Admission is free but do check online ([email protected]/Janvier Exhibition) for hours of operation and site location. The gallery is closed on Mondays.

Be the first to comment on "Feature artist for October 2022: Alex Janvier"