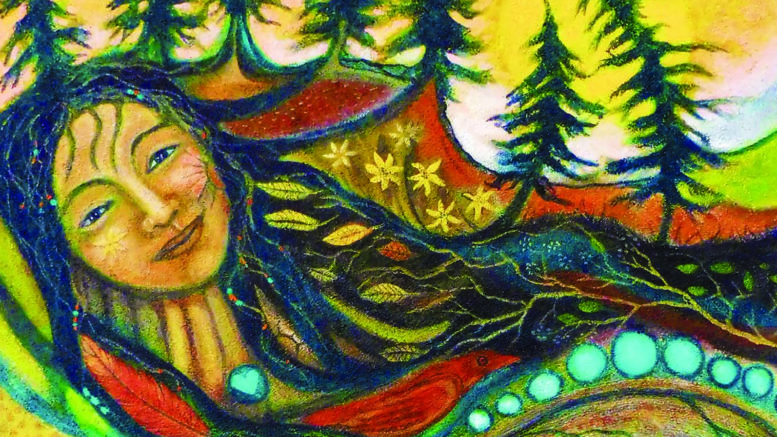 (ANNews) – The beautiful image on the cover of the June Alberta Native News is by Edmonton-based Cree-Metis artist Nancy Desjarlais – titled Child of Nature.

It’s always an honour and pleasure to share space with notable talents in the world of art. In late May, the stage was set when Edmonton’s long-established art gallery, Bearclaw Gallery, featured one of Canada’s most highly-regarded artists –  Maxine Noel, aka Ioyan Mani – (‘Walk Beyond’ – her Sioux name) with emerging artist Nancy Desjarlais. 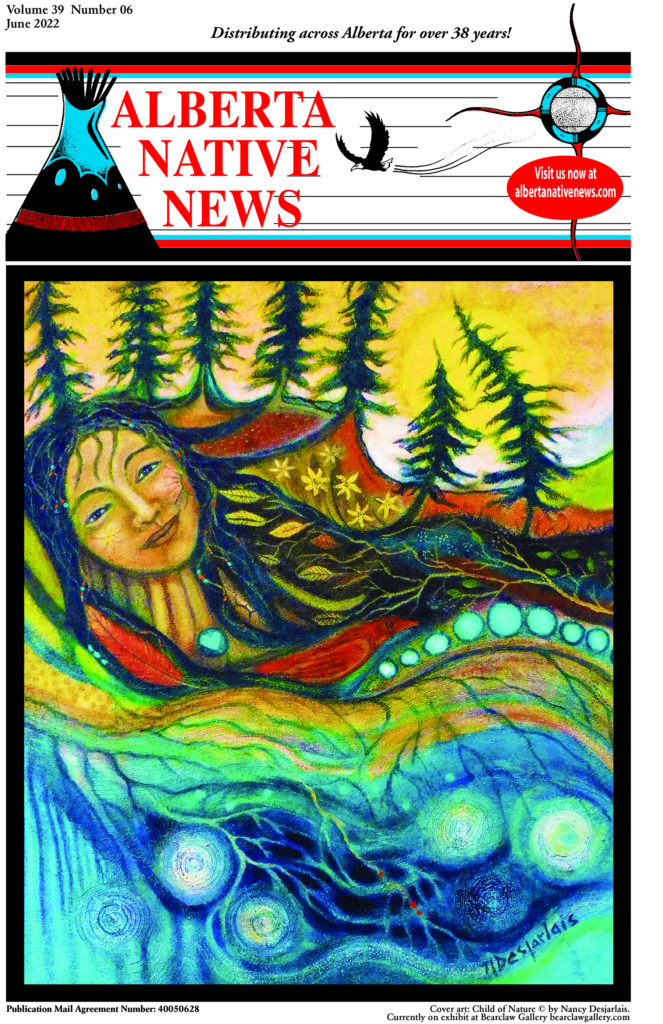 As a dual act, the two artists’ works were specially featured at Bearclaw’s ‘We Walk Together’ exhibit in late May and early June.

Unfortunately, Noel was unable to attend on opening day, May 28th, but Desjarlais was present and those who visited were delighted to meet her.

With the passing of five of the original Group of Seven acclaimed Canadian Indigenous artists, only two remain – Alex Janvier and Joseph Sanchez. Other talented Indigenous artists have reached international acclaim included Maxine Noel, Archie Beaulieu, Joane Cardinal-Schubert, and Jane Ash Poitras. But Cardinal-Schubert and Beaulieu have since passed on and a new wave of gifted artists is emerging. Nancy Desjarlais, originally from the bushlands of northeastern Alberta south of Fort McMurray, is poised to become a member of that talented group.

“Nancy came to us five years ago.” Thus, she’s still relatively new to the gallery. However, over the past year “I saw evolution, growth, in her technique and expression.”

Noel, on the other hand, had the benefit of being with Bearclaw since the ’80s and has created a following. Bugera sees her as “extremely significant given her social and cultural influences.” When the National Aboriginal Achievement Awards (now Indspire) came on the scene, Noel was rapidly snapped up to help design their magnificent stage sets that absolutely astounded viewers. They were “incredible!”

Today, like Alex Janvier and Joseph Sanchez, she is a national treasure.

Indigenous art in general is experiencing a resurgence rather than tapering off, expresses Bugera. It is morphing in unique ways, alongside mainstream art. 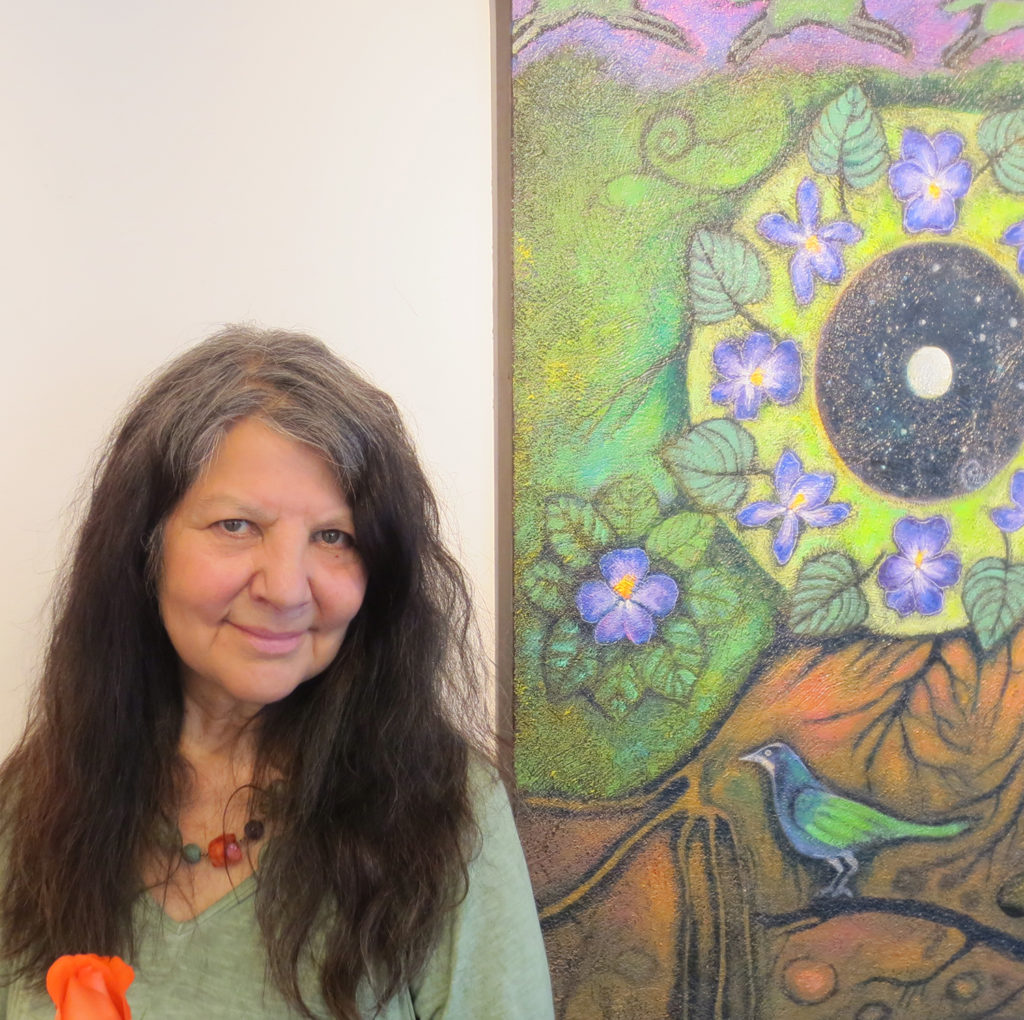 Desjarlais’ art fits nicely into this profile as she produces earthy, contemplative pieces which seem to offer a serene and calming effect on viewers.

As a child of the backwoods country Desjarlais has never lost that natural connectedness with her land, water or culture as these were gifts from Creator. She’s always felt that closeness to Mother Earth and acknowledges and expresses it in her art, sometimes using mixed media that includes gifts from the land – things like sand, cedar, feathers, birchbark – which she then mixes with her paints.

In fact, many of her contemporary pieces employ the use of sand and acrylic which is something a bit different for art connoisseurs as it intertwines the natural elements with her paint.

In recalling her childhood, she says, “I always loved to colour with crayons, then pencil crayons.” In Grade 7 she was encouraged by her teacher and her foster parents. After she married and moved to the west coast, she experimented even more with natural materials borrowed from the land. This included feathers and beach glass. “I found a lot of inspiration looking at art …. learned by imagination and exploration.” And the coastal territory provided additional influences for her art.

Her return to Edmonton was a welcome move as it allowed her to be close to family and friends she missed, especially her children and grandchildren.

Admittedly, one of the strongest influences on her work she maintains is her own Cree culture.

“It has a lot of symbolism,” she explains. Of course, her use of mixed media offers her a sense of “freedom” in that nature “has so much to offer.” She often injects symbols into her images that “include petroglyphs, animals and birds, in addition to tipis, flowers and trees. She also likes to include elements of the universe – stars, planets, and spirits.

She really enjoys having her art reflect her culture. “Cree culture is so rich in meaning,” she states. As one example, “the tipi is important in our culture; it’s very meaningful, a place to gather, do ceremony, it’s very natural.”

Desjarlais’ process is eclectic, she doesn’t always preplan it. Sometimes she’ll meditate on an image for a while before she gets back to it. Meanwhile, she is passionately honing her talents as she continues her journey in the world of art. She enjoys it and wants to share it with others, with the world.

To view her  art, as well as the art of  Maxine Noel and other gifted Indigenous artists, visit Bearclaw Gallery in Edmonton  at 10403 124 Street or bearclawgallery.com.