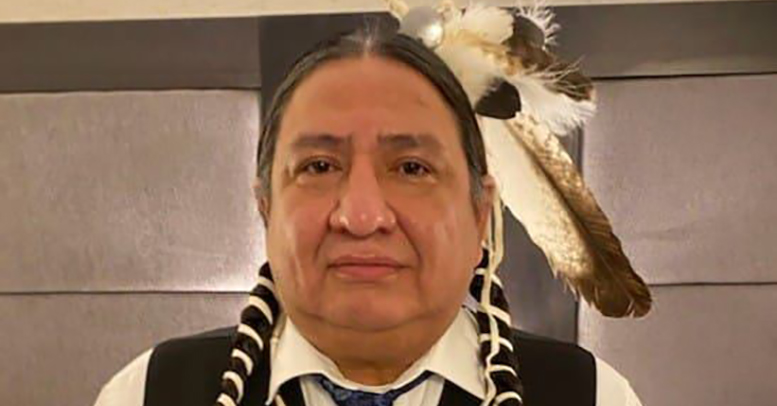 (ANNews) – Chief Desmond Bull is passionate about ensuring that the next generation can inherit a future containing sustainable energy. Before being elected Chief of the Louis Bull Tribe, he was an educator for 12 years and worked in I.T. – he also created online programs for youth.

Chief Bull, a direct descendant of Chief Frances Bull, also facilitated his leadership skills by completing the Aboriginal Leadership, Governance and Management program at the Banff Centre for Arts and Creativity in 2012.

He is currently one of Canada’s only Cree Chiefs leading the way on clean energy, and he is urging leaders to prepare for climate change; “the world is changing,” he warns.

“I spoke at the Royal Alberta Museum about renewable energy from an Indigenous lens, and NDP MLA Shannon Phillips heard me speak. She asked me to be on a committee and do the reporting on renewable energy and meet with other First Nation communities,” said Chief Bull.

After the reporting, $20 million was injected into Indigenous renewable programs. This created an opportunity for communities to implement megawatt programs like those developed on Ermineskin First Nation and Montana Cree Nation.

He said there is an opportunity to take advantage of clean energy projects to help reduce climate change and prepare our nations for it. Climate change is happening here and right now, he added, and most First Nations need to prepare for it.

His community has been at the forefront of utilizing sustainable energy projects.

“We are right now, at a point in climate change, where it will impact us. We’ve got to get better at preparing ourselves for later as the world’s climate changes,” said Chief Bull.

He said part of his goal is to leave a legacy rooted in the very soul of his Nation. Clean and sustainable land. A gift that the future members of his Nations can enjoy.

Chief Bull spends a lot of time participating with outside groups and panelists, working federally and internationally. He collaborated nationally with famed Canadian academic, science broadcaster, and environmental activist David Suzuki as well as climate change think tanks on clean energy. He also worked with the David Takayoshi Suzuki Foundation on creating a movie on climate change.

“It’s not how much money you make but honestly what you leave behind (that’s important), so that the next generation can enjoy it,” said Chief Bull.

He said he is looking at the broader picture. This isn’t an individual, government, or industry issue but a human issue, he added. We all live here on mother earth and should work together to find a solution for sustainable energy that is clean.

He advises other advocates or leaders to network, work together, and find ways to create sustainable and renewable energy.

“We all have a common interest in saving Mother Earth,” said Chief Bull.

He added it’s good to educate those that don’t understand the importance we as First Nation people place on our ancestral connections to Mother Nature.

Chief Bull has made significant strides for his Nation. In 2018 he successfully spearheaded the installations of 188 Kwh of P.V. (solar) on eight separate public buildings. Trained band members installed the projects, which are 100% owned by the tribe, and fully funded through grants/subsidies, infrastructure development, sponsorship, and fundraising.

This work in renewables opened opportunities for Chief Bull to affiliate himself with a variety of high-profile sustainable energy groups. And most recently, he helped ensure Maskwacis Cultural College MCC solar panels and worked with local elders to create a word for solar panels.

Legacy for Chief Bull is one of hope, leaving something for future generations and working today for the long-term prosperity for his people.

Too many leaders are thinking about the now – “cars and houses,” but they should work toward the greater good of society and future generations, he concluded. About his own community, he said, we can do waste management better, food sustainability better, and public transportation better in Maskwacis.