Everyone who has lost a father or mother understands what a terrible hole that makes in one’s life. It seemed that those people who were so much a part of our earliest years would always be around. In fact in talking with friends recently it dawned on us that most of the people we know are not even making it to their mid or late 70s. This seems more the case in First Nations where people are just not living as long as they should as a result of hard lives in remote communities. We are losing our Elders far too early because of diabetes, heart disease and cancer.

Many First Nation people have had to survive hard times over the years when the only way they could make money was to trap or find jobs working for the government and in local stores. Most had no opportunities. In more recent years, with less time out on the land, my people have turned to modern fast foods and that is causing a lot of health problems. Alcohol and drugs have also contributed to poor health for many Native people and that continues to be a problem. 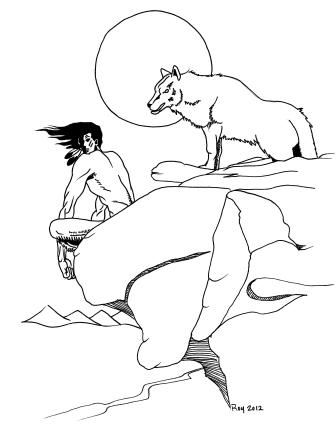 I have had all kinds of feelings in dealing with the passing of my father, Marius. I felt guilty for not having spent more time with him and my mom, I felt sad that he did not seem to really understand who I was and that he had to endure the residential school system and abuse as a child. I felt confused because he seemed to think that I would be better off never leaving my role as a tractor operator, carpenter or teacher assistant back home. He did not understand that writing could be a useful profession. He did not seem to appreciate the fact I was clean and sober. I also felt angry because I was upset that he had not made better choices in his lifestyle. Then through the healing of time I realized just how wonderful, strong, loving and dedicated my dad was to his wife and family.

Dad grew up when times were very hard for First Nation people during the 1940s, 50s and 60s. He was a man of the land by tradition and even more by necessity because he needed to trap, hunt and fish to keep himself and our family fed. He felt racism when he left Attawapiskat to work on the railroad but he endured and was also awakened to life in the modern world. He became a businessman and entrepreneur with all types of business start ups including, contracting, restaurant and food services, laundromat, transportation and the construction and set up of a hotel. Through all of this and over the years he had his ups and downs and he struggled with all of the demons that most people deal with. This all took its toll. The strong and confident man I knew as a child became more and more weak as time marched on.

I wonder now how he managed to keep things together as well as he did. Much of this had to do with the good fortune in meeting my mum Susan. She was integral in his foundation as a good man. He picked himself up from so many falls in life and dusted himself off and kept on and when he could not mom was there to give him a boost and a place to rest his head and heart.

All through my day and every day I think of my dad. He visits me in many things I do during my work about the yard or cottage with all the lessons he taught me. He comes to me in my dreams to say Wachiyeh. Still, I find it strange that he has gone from this life and I have wondered until recently where he might be. I found out.

Recently my mom told me that just before he passed, dad had confided in her about a place he came upon when he was a young man. In those days he had nowhere to go to feel free except for the land. On his own, many times he would head out to far away places up and down the James Bay coast. He had all the skills he needed to survive alone and with nothing on the land for months and he did that often. Dad told mom that on one trapping voyage out on the land he came across a most spectacular site that thrilled him. He stumbled onto a beautiful lake and at one end of it stood an amisk weesh-toon (a beaver house) as tall as a mansion. It was as high as a three story house and stood majestically above the pine forest in the far northern wilderness.

Dad, had been so excited by his find that he went straight to the structure and climbed it until he reached the very top where he sat back and enjoyed the view of the land, the trees and the great James Bay. He was on top of the world that day.

I like to think that my dad has once again climbed that amazing beaver house and is sitting there watching over all of us with a content and peaceful look on his face and a broad smile.

Be the first to comment on "Fathers Day Tribute: On top of the world"