(ANNews) – October 2, 2016 will likely be a day that Father Jim Holland, parish priest at Edmonton-based Sacred Heart Church of the First Peoples, will never forget.

On that date, a Sunday, a special transfer ceremony transpired in which the Oblate priest was gifted with a full eagle feather headdress – one of the most prestigious honours one can receive from Canada’s Aboriginal community. This particular ceremony follows on the heels of an earlier one this year by which the beloved priest had a street alongside the church named in his honour.

Officiated by Elder Martin EagleChild, a Kainai Elder from the Blood Indian Reserve in southern Alberta, the ceremony was conducted at approximately 1:30 p.m. following the 11:30 a.m. – 1 p.m. Sunday service that is largely attended by numerous Aboriginal people from in-and-around the Edmonton region. On a regular basis, out-of-town Aboriginals also complement those in attendance at Sunday’s 11:30 a.m. services. The one special feature that never fails to grab the attention of the church goers is the inclusion of some of the Native religious traditions that occur during the service. 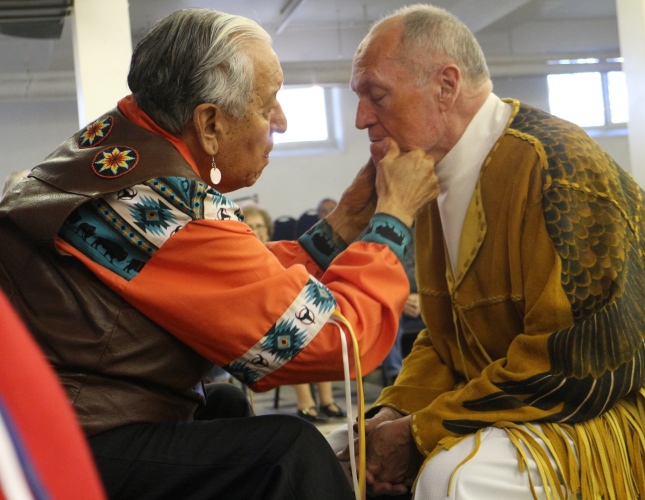 However, the Sunday service of October 2nd proved to be extra-special as one hundred or more church-goers made their way after the mass to the church basement for the headdress transfer ceremony.

The event began with an explanation of the ceremony and the facilitator, Martin EagleChild, told of his friendship and respect for Fr. Holland ever since the time the two had met and befriended one another some years earlier.

EagleChild, who had more than one eagle feather headdress back home had decided some time ago that he would transfer one of his headdresses to someone he considered worthy and most deserving of such a prestigious honour. After some degree of thought, EagleChild chose Fr. Holland to be the recipient.

Over the past few months, EagleChild obtained materials and refurbished the headdress. During that period of time a local committee of Elders from Sacred Heart met and planned for the special ceremony that would honour an individual revered and respected in the Edmonton community. 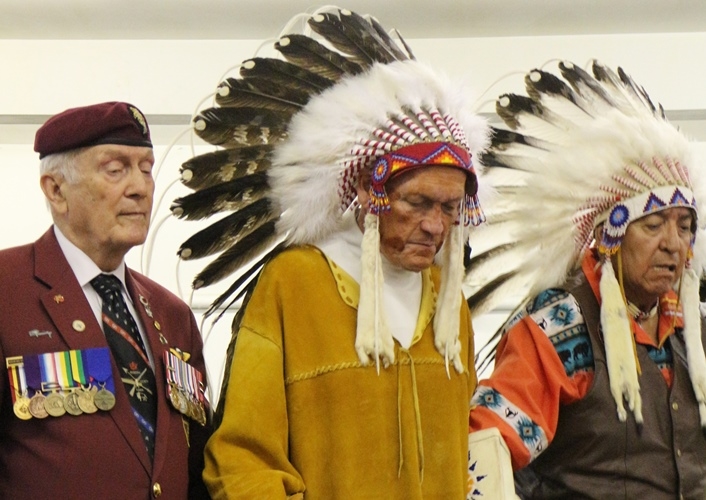 Once Sunday rolled around, the Elders gathered and set up the chairs, as planned, in the church basement. A large inner circle of 35 – 40 chairs were arranged to accommodate mostly seniors and Elders while the balance of about 50 – 60 more were set up in theatre style. The ceremony was preceded with a brief historical background provided by Paul Van Steeg.

The actual ceremony commenced with EagleChild seating Fr. Holland just a few feet away, and facing him and four of the church Elders.

EagleChild described the high esteem to which Fr. Holland is held. He detailed some of his valued contributions, especially to the Aboriginal congregation and community in and around the Edmonton area for better than 20 years. The hundred or so congregants that had gathered in the room were then informed that the priest had come from a Baptist family in North Carolina. He then moved to Canada where he joined the Franciscan Order prior to his move to Edmonton where he was later ordained into the Oblates of Mary Immaculate. 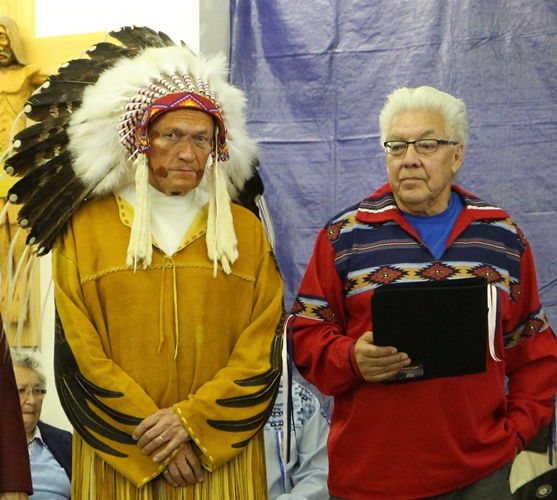 Holland was recognized for often “going above-and-beyond” his regular role and duties as he helped his flock through good and bad times, frequently putting in long hours and end-to-end consecutive days of dedicated service to his faithful. Aside from helping individuals on a one-to-one basis and seeing to their spiritual needs, he also arranged for special church services, weddings, funerals, garage sales, occasional meals for hundreds at a time, visiting the sick and infirm, personally counselling those with real-life issues, and so much more.

Flanked by the four church Elders, in addition to the others seated in the inner circle, EagleChild proceeded by painting his face in preparation for the headdress transfer. That was followed by four tales of bravery that were recited, each in one of the four cardinal directions, by Canadian Air Force veteran, John McDonald who then, along with EagleChild, paraded the subject – Fr. Holland – in a clockwise fashion around the inner circle.

Holland was then seated again in front of EagleChild where he was formally presented with the headdress amid whoops and hollers, as well as trilling from the women present.

The ceremony concluded with a mini-round dance with the parishioners participating. This was later followed by an opportunity for people to line up and congratulate Fr. Holland personally.

Thus concluded an honourable, traditional ceremony that many people never get to witness during their time on Mother Earth. For the recipient of the transferred headdress – Fr. Jim Holland – it was, indeed, a most special occasion that will never be forgotten.

6 Comments on "Father Jim Holland honoured with a headdress ceremony"