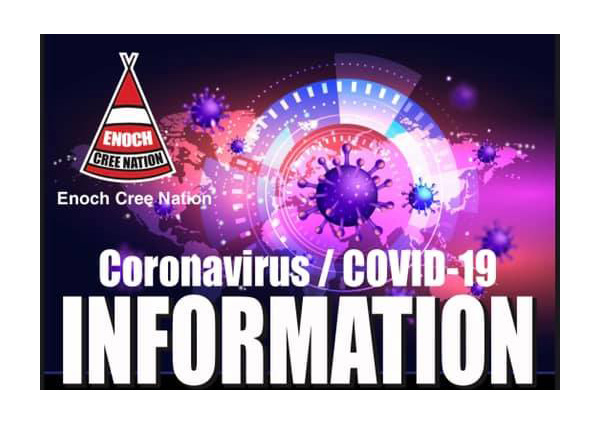 (ANNews) – Enoch Cree Nation has announced a shutdown of all non-essential services.

“Due to a recent outbreak of COVID-19 (including the variant), effective immediately, and until Wednesday, May 5th, all Enoch Cree Nation departments… will be closed as per a Chief and Council decision,” said Enoch Cree Nation in an announcement on April 21, 2021.

The decision to shut down is an attempt from Enoch to control a sudden spike of the virus in the community.

Enoch, which is west of Edmonton, announced that the shut down would last 14 days.

Colleen McDonald, the Nation’s Executive Director for health services, said that the shut down is a pre-emptive measure to prevent the variant strains of COVID-19 from spreading throughout the Nation.

“This is an opportunity for Enoch Cree Nation to be proactive. We know that a number of our brothers and sisters from across Turtle Island and beyond have been exposed to the variant in other First Nations communities. We’ve seen how it sweeps right through the nation, and it’s causing a lot of strain and stress on livelihoods,” she said.

After having no cases for weeks, there were seven confirmed on-reserve cases of coronavirus found on April 21. McDonald said that there were members of the Nation who live off-reserve in Edmonton who also had the virus.

McDonald reiterated that it is not a full lockdown, but anything that is non-essential is closed.

Health services like the food bank and social supports are still operating, however Schools will be moving to virtual learning and many Nation staff are being asked to work from home. While McDonald acknowledges that COVID fatigue has set in, she emphasized the need to be proactive — both in her community and beyond.

“We have to be diligent when it comes to public health and safety measures. They’re put there for a reason. They’re not there to control us, they’re actually there to protect us and to protect others,” she said.

Meanwhile in greater Alberta, the province’s chief medical officer, Dr. Deena Hinshaw, announced there were 1495 new cases on April 25. The Regional Municipality of Wood Buffalo has declared a local state of emergency as their number of infections soar. Council will be voting on a number of new measures on Alberta 27.

Sixty per cent of Alberta’s 20,600 active cases are linked to now four variants.

“These are concerning numbers that underline the fact that we have work to do together,” Hinshaw said.

There are now 616 Albertans in the hospital for COVID-19, with 145 people in Intensive case units.

“It’s important to remember that hospitalizations are a lagging indicator and these individuals in hospital were likely first infected around two to three weeks ago,” Hinshaw said.

“Given how high our leading indicators — growth rate, new cases and positivity rate — have been, we can expect to see this number grow in the coming days.”

Alberta Health Services had administered 1.4 million vaccine doses as of the end of April 25.

Celebrating the selfless acts of volunteers