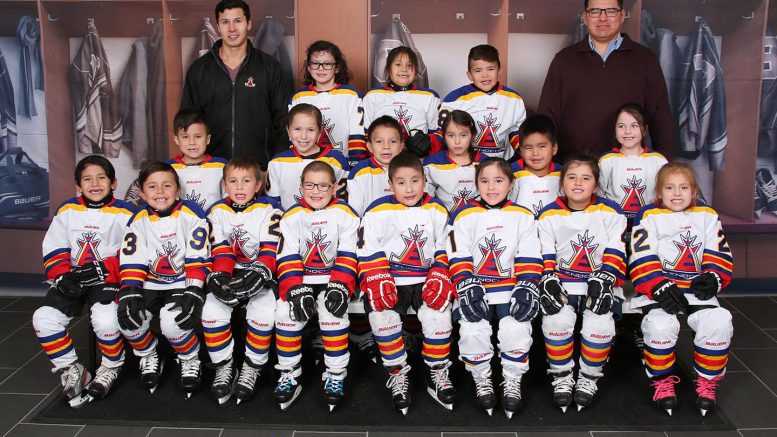 The Enoch Cree Hockey Association will be hosting an Initiation Tournament and Rogers Hometown Hockey in March 2019. (Photo from ECHA)

(ANNews) – A year ago the Enoch Cree Nation 440 Juniors came from behind to tie the score 3-3, before winning in overtime and becoming the first ever all-Indigenous hockey team to win gold in the annual Edmonton Minor Hockey Week competition. In doing so the team set a new precedent and marked another milestone for amateur hockey, the team, the Enoch Cree community and for the Edmonton and area region in which they play. After the final medal presentations had been made Enoch’s count had risen to two gold and three silver.

“These were great moments and ones that brought much pride to the team, the community and to everyone involved in our hockey program,” smiled Enoch Cree Hockey Association (ECHA) president, Jordan Courtepatte, in a recent interview about the growth of the association and the community’s upcoming participation in the Rogers Hometown Hockey segment of SportsNet’s Hockey Night in Canada.

Dormant for more than three decades, community hockey at Enoch took a step forward in 2015 when a group of community members, including Recreation Director Courtepatte, were successful in re-establishing the Enoch Cree Hockey Association. The process wasn’t easy, noted Courtepatte, and took about a year to complete but it has been a success story and hockey continues to get bigger in the community each year.

“As the Rec. Director,” he explained, “I heard from a growing number of kids who wanted to play hockey but parental support and transportation to the arenas in the city were barriers for the kids to play organized hockey; in order to qualify for equipment, you must be enrolled in an organized sport. Two years on the job and I realized that there were too many kids who wanted to play, who deserved to play, but who couldn’t. I wanted to reestablish the hockey association to help ensure that every kid has a chance to participate; I had backing from some community members and in the end, we saw the re-birth of the association.”

As Enoch Cree Hockey readies for its fifth year of operation the fourth is still underway. So far this year Enoch has won one gold medal; championship play will soon get underway.

“Hockey in the community has come a long way in the last four years and our teams get a lot of support when they’re on the ice; the parents and grandparents and friends and family get the opportunity to see their kids participating, growing and establishing new friendships.”

The Enoch Cree will be part of another memorable milestone (March 21-23) when the Enoch Community Centre plays host to the ECHA Initiation Jamboree, a 14-team, fun-filled hockey tournament for kids aged 4-6 years. The deadline for registration has already passed but registration will be possible as long as there’s room.

“We’re working on a first-come first-served basis but so far it looks like we’ll have at least ten First Nation teams participating,” explained Courtepatte. “We just want to introduce the younger kids to sports and particularly to hockey and that’s why we chose to go with this age group. There are no winners and no losers; everyone gets a prize.”

A day after the Initiation Tournament draws to a close, the community and its hockey program will make a little history of their own when Enoch becomes the first Indigenous community hockey team featured on Roger’s Hometown Hockey. The salute will come during the Montreal/Carolina NHL hockey game, which begins at 4:30 p.m. local time on Sunday, March 24. Hometown Hockey is hosted by SportsNet personalities Ron MacLean and Tara Slone, who travel to 24 different communities across Canada to celebrate local hockey stories and heroes. Enoch is the last of five Alberta communities to participate this year.

Program development for the events is still underway.

“Everything is coming together,” noted Courtepatte, who said the association will “soon confirm our special guest list for the event. We’ve followed the format of other initiation tournaments that have taken place in the region, but we’ve added our flavour to it and how we’d like to see it run. We are going to have an opening ceremony, probably on the Friday night (March 22) that will include a few speakers, traditional singers and dancers. We are hoping to have the Chiefs from Maskwacis, as well as others from Treaty 6, join us and participate in the Grand Entry. We’d like this to be a positive and memorable event and hopefully one with good weather. The tournament will be inside but many of the activities will take place outside.”

Courtepatte said the interest and support from SportsNet and Hometown Hockey “has been really positive; they are going to tell our story. They’ve been doing research on us and we’ve provided them with a bunch of information about our hockey program – how it got started and where it is today. They’ve been very helpful and in fact are providing a grant, which I have just applied for, that will be utilized for youth sports programs.”

Though the invitational tournament ends on March 23, Courtepatte said the main event will actually take place on the Sunday, before, during and after the Hometown Hockey segment featuring Enoch hockey.

“We like to encourage everyone to stick around and join us on Sunday,” he emphasized. “We held the tournament on the days we did because we wanted everyone to be able to participate in all the activities that we have planned for the 24th.”

The plan is to have, among other things, live bands, raffle draws, a silent auction and entertainment for the kids. There will also be an opportunity for kids to play ball-hockey and participate in other events. The ECHA will be updating its Facebook page and website as event activities are added and finalized; more information will be available as the event day gets closer.

Courtepatte said he is hoping to have former NHL First Nation players as guests at the event.

“We don’t have a list finalized yet but we certainly would like to see people like Brian Trottier, Reggie Leech, Grant Fuhr, Jordin Tootoo and others join us. There are quite a few barriers facing Indigenous athletes when it comes to making it into professional hockey and it would be nice to have people join us who’ve overcome those barriers and carved a career for themselves. These athletes are great role models for our youth.”