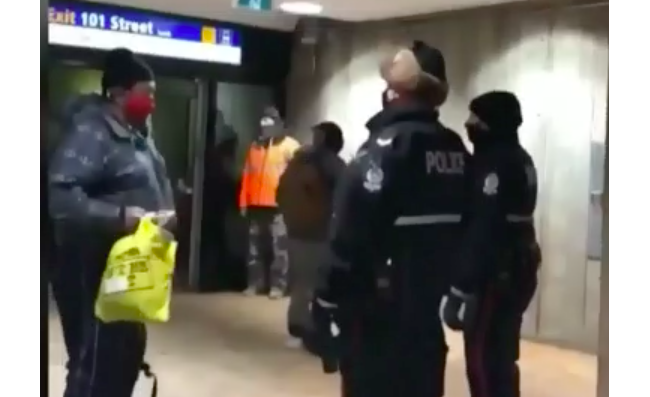 (ANNews) – Edmonton Police Services made headlines this week when officers kicked homeless citizens out into the street during freezing cold temperatures.

The Edmonton Bear Clan Patrol caught the whole thing on video and released it to the press, appalled by the EPS officers’ lack of regard for fellow human beings.

The Bear Clan Patrol – which started in Winnipeg as a community initiative to reduce crime and has since spread to Alberta – was feeding approximately 25 people who were taking shelter from the cold inside the LRT network’s Central Station.

“When people are hungry and they need water and a hot meal…we oblige, because we’re humans and that’s why we’re out there, to help other human beings – especially in this cold snap,” said Judith Gale, who works with The Bear Clan Patrol Edmonton Beaver Hills House.

“It just kills me that our brothers and sisters were put out on the street.”

The police officers in the video were telling some of the people that they weren’t allowed to remove their masks, even while eating. They were also told that they were loitering and had to find somewhere else to eat. After concerns over the freezing temperatures were raised, the police officer responded with “there’s lots of shelters though.”

“(The officer) didn’t arrange for any transportation to that shelter,” Gale said. “He had no humanity.

“For EPS (Edmonton Police Service) to do that, what are they saying?”

The Bear Clan Patrol Edmonton Beaver Hills House is an organization that focuses on outreach and community service. “It came about as a result of the ongoing need to assume our traditional responsibility to provide security to our Aboriginal community,” states the Bear Clan website. “The concept behind the patrol, is community people working with the community to provide personal security in the inner city in a non-threatening, non-violent, and supportive way.”

A spokesperson for the Edmonton Police Service (EPS) was quoted as saying, “Our officers strive to balance the role of enforcing public safety, bylaws (loitering) and COVID-19 protocols.”

“In this particular case, we should have better communicated our role in helping connect citizens to the City of Edmonton’s services and partner agencies whose goals are to keep vulnerable citizens safe and warm.”

Ward 4 councillor Aaron Paquette said that he is going to speak with City Councillors who are part of the police commission in order to understand what police officers’ protocols are in such situations and to promote dialling 211 to get help in assisting with homeless among officers.

“No one should be freezing to death on our streets… They shouldn’t be losing limbs,” said Paquette, who has advocated for using LRT stations to help vulnerable people warm up. “Our shelters are not yet at capacity… some are… (but) shelters are not a solution to homelessness.. they are a stop-gap to at least help people survive.”

Assembly of First Nations Alberta Regional Chief, Marlene Poitras, released a statement condemning the actions of the EPS which “points to the deep systemic issues that exist to prejudice minority groups.”

Chief Poitras continued, “What crime was averted by removing those seeking shelter? By forcing homeless people to effectively make the choice between food or warmth?”

She then mentioned Edmonton’s plan to end homelessness this year and believed it could not be achieved “through forcing rough sleepers into the cold, putting their lives at risk.”

“If Edmonton truly wishes to make systemic changes they should consider diverting funds from enforcement in these circumstances and other non-violent crimes such as “loitering” into community and support services such as social workers, safe supportive housing, and other outreach programs.”

“We can only hope to end chronic homelessness by treating the disease, not just managing the symptoms,” ended Chief Poitras.

“We should do better and for this we are sorry,” read an EPS statement.

Judith Gale said that the Edmonton Bear Clan Patrol appreciates the EPS apology but said that it would be more meaningful if they would treat everyone like a human being.