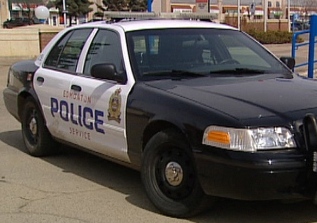 Edmonton Police Services (EPS) Inspector Dan Jones wasn’t always a policeman but since joining the service some 17 years ago he’s found it to be a rewarding career that has lived up to his expectations. His dad, who retired just one year after Dan joined the service, was also a policeman. His uncle is a retired detective; his brother and a close cousin are current members of EPS.

“I had a variety of opportunities as a young man,” he explained in a recent interview, “and in the end I came to realize that though I’d probably succeed at whatever endeavour I chose to pursue, I could make a bigger difference, a positive difference by following in my father’s footsteps. I love the challenges and the day-to-day life as a member of the EPS, and in my current position I am able to help facilitate positive growth throughout the community I serve.” 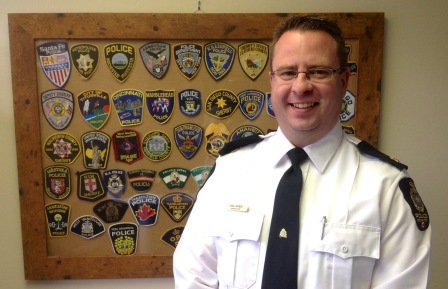 That positive difference is particularly important to Edmonton’s urban Aboriginal population, one of the largest in Canada and by far the fastest growing in the nation. That’s because the EPS Investigative Support Branch, under the guidance of Inspector Jones, is also the Branch responsible for establishing and maintaining the Edmonton Police Service’s Aboriginal Strategy, an initiative that the Inspector has played a major role in developing.
“The EPS Aboriginal Strategy,” explained Jones, “has four specific goals. These include developing strategic community partnerships, increasing education and cultural awareness, increasing recruiting efforts with the Aboriginal community and providing support for policing operations.”
All four goals are currently underway; in fact 819 of the approximately 1700-member police service have already received Aboriginal awareness training, training that includes in-depth information on such things as the Indian Act, the Indian Residential Schools, the 60’s scoop, early history between police and Indigenous peoples and more.
“We realize that there are historical misunderstandings and general mistrust,” noted Insp. Jones. “We are taking the first steps in an effort to heal this relationship, and in the process are engaging with and working with numerous Aboriginal organizations and communities in Edmonton.”
The first goal of the Aboriginal Strategy is the development of partnerships between the EPS and the Aboriginal community.
“Productive relationships,” noted the Inspector, “are important and we think that it is essential to maintain the partnerships we have already developed and strive to attract even more partners within Edmonton’s Aboriginal organizations and communities. We need to work together to meet the changing dynamics of the population and the City of Edmonton.”
The strategy also involves developing partnerships with the RCMP’s Aboriginal Policing Unit and with the various government bodies that work with and within the Aboriginal community.
The second goal of the Aboriginal Strategy is to increase education and cultural awareness throughout the capital city. Though the diversity of cultures within Edmonton helps contribute to the richness of the city, these diversities can also lead to misunderstanding, miscommunication and frustration. That goal began with the Aboriginal Awareness training of nearly half of the EPS members; the remaining 900 will also complete the training.
“The EPS will utilize a variety of mediums to educate our members,” explained Insp. Jones. “Our goal is to work more effectively with Aboriginal communities and to both increase awareness in these communities about the role of a police officer, and to develop sustainable working relationships within the Aboriginal community.”
The third goal of the initiative is to increase Aboriginal enrolment in the EPS.
“Building a diverse and culturally representative policing agency is another way to build trust in the community,” assured the Inspector. “We are committed to building a diverse workforce, one that recruits from all sectors and all cultures. To achieve this goal the EPS will include Aboriginal-specific recruiting initiatives in its overall recruitment plan.”
The fourth and final goal of the EPS Aboriginal Strategy will be to stay informed on the challenges that affect the Aboriginal community. EPS will monitor the daily media, sit on various community committees and connect with related non-governmental organizations and other provincial and national groups.
Idle No More, The Highway of Tears, Violence Against Aboriginal Women are just some of the topics and issues making the headlines in Canada. “By staying abreast of these issues,” noted Insp. Jones, “it will ensure that EPS makes informed decisions in our service delivery in any situation relating to Aboriginal-based protests, rallies and major gatherings.”
“To help people, to work effectively with people, we first need to understand their culture,” explained Jones. “Our members are becoming engaged in the community and they are learning more and more about Aboriginal culture and tradition. We are setting up access to victim’s services in each of our divisions. Aboriginal people are seven times more likely to be the victims of crime than other Canadians and Aboriginal women are five times more likely to be the victims of abuse and sexual assault. These are some the of issues we are addressing as we move forward. As the urban Aboriginal population continues to grow, it is crucial to have a collaborative policing strategy in place that is based on open communications, understanding and trust.”
Inspector Dan Jones is more than just a policeman; he’s a father, a husband, a police insignia collector, a former boxer, a boxing coach and a soccer coach. He was friend of the late Gordon Russell and often worked with him at the Crystal Kids organization in north-Edmonton. Before joining the police service he was involved with various Aboriginal groups, including the Bent Arrow Society, an organization he maintains a close relationship with. He’s also developed a close relationship with Metis Child and Family Services and with the Institute for the Advancement of Aboriginal Women. He also sits on various committees, including the Aboriginal Community Liaison Committee, the Alberta Association of Chiefs of Police – Aboriginal Policing Committee, the Canadian Association of Chiefs of Police – Aboriginal Policing Committee, and as a Board Member with the Bent Arrow Traditional Healing Society and the Victims of Homicide Society.
“To be effective you have to participate, you have to understand the community you live and work in, you have to communicate and work in unison with community partners and most importantly you have to know when to listen and when to talk. The EPS is striving to build a better understanding with Aboriginal citizens and we have made a great deal of progress in that area. We welcome community input, we encourage dialogue and we are always interested in developing new partnerships.”
For more information on the Edmonton Police Service and the work they do in the community, vist: www.edmontonpolice.ca and click on the link: Community Policing.
by John Copley

Be the first to comment on "Edmonton Police Service: Building trust through respect"