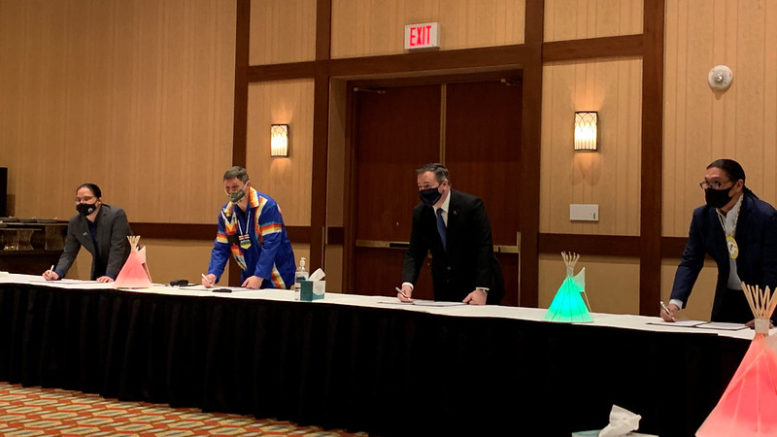 (ANNews) – The Alberta Confederacy of Treaty Six First Nations – which represents sixteen First Nations within the province such as Enoch, Samson, and Sunchild — recently signed an historic agreement with the Alberta government.

The Alberta Confederacy of Treaty Six First Nations Protocol Agreement outlines a formal process for ministers, chiefs and councils to meet several times throughout the year with the focus being on six key areas: land and resources, health care, education, justice, economic development, culture and tourism.

“The protocol agreement gives Alberta and the Confederacy of Treaty Six First Nations a way to have meaningful discussions, share information and explore issues of mutual concern,” said the Government of Alberta in a December 16, 2020 press release.

The agreement also commits to an annual meeting between the Chiefs of the Confederacy of Treaty Six First Nations and the provincial Premier.

The Treaty Six Confederacy Grand Chief Billy Morin stated that “a protocol agreement is more than a document. It is a promise between governments about communication and collaboration with a focus on shared prosperity, now and for years to come.”

Rick Wilson, Alberta Minister of Indigenous Relations said, “I’m proud to walk a path of reconciliation with Confederacy of Treaty Six First Nations. We will work together in a spirit of respect and partnership to move forward our shared social and economic priorities.”

“I couldn’t be more proud to sign the first agreement between Alberta’s government and the Confederacy of Treaty Six First Nations since 2008.”

Alberta Premier Jason Kenney also spoke on the signing, “The recovery we are driving for this province, after unprecedented economic and social challenges, will not be complete without Indigenous involvement.”

“It’s a great moral imperative – ensuring Alberta’s opportunities and prosperity are shared with First Nations – the first peoples, the first entrepreneurs and the first stewards of this rich land on which we stand. And the protocol agreement we’re signing today is key to making that happen,” concluded the Premier.

Grand Chief Morin explained the significance of signing the protocol with the province. “It’s not enough to say we didn’t sign Treaty with the Province and then wait decades for Canada, their courts, Alberta and the Crown/Queen to do right by us.

“We will never stop movement to uphold Treaty Rights, holding Canada, Alberta and the people who live on these lands accountable to Treaty as long as the sun shines, grass grows and rivers flow. But it doesn’t always have to be in front of a Canadian Judge, or fighting, that we find ways to uphold Treaty.

“Truly the faster way, often times, is to create a leadership table and spaces for anyone … spaces where respectful agreement and (dis)agreement can be had outside lawyers rooms. This is why we created this Agreement with Alberta, to have our say as Chiefs of Treaty 6.

“With this agreement, we have another option to make it clear that the Department of Fish and Wildlife have no right to stop hunting for our people; that we have a table to create better resource revenue sharing mechanisms below the depth of a plough; that we have a space to have our say for our kids in the Alberta School system. Alberta can learn more about our right to create our own justices systems for our people … maybe it will be an even better system they learn from and can implement in the Alberta Justice System.

“Realistically the 4,000,000+ citizens of Alberta are here to stay on this Treaty Territory. We have to work with Albertans in some way. Treaty was meant to share.

“While still not letting past wrongs be forgotten and unaddressed, we still honour that spirit and intent to share and do right by the land and creator moving forward with all Peoples who call this Treaty Land home.

“We won’t always agree, but I’m willing to focus more time on things we do agree upon, so we can achieve results for First Nations and Albertans in the spirit of the ultimate law of this land … Treaty.”

The Protocol agreement between the Treaty Six Confederacy and the Albertan Government is the latest in a trilogy of protocol agreements created between Alberta and First Nations within the province.

This agreement sets out ways the Blackfoot Confederacy Chiefs and the government will work together to address topics such as: Education, environment and lands, health, economic development and employment, political and legal.

This Protocol acts much like the others, as the agreement commits both parties to engage in mutual government-to-government discussions on these topics: health, economic growth, education, family services and housing.

In 2020-21, Alberta’s government will provide the Confederacy of Treaty Six First Nations with a $300,000 grant to support the agreement’s implementation.

The agreement will remain in place for as long as both parties wish to keep it active.