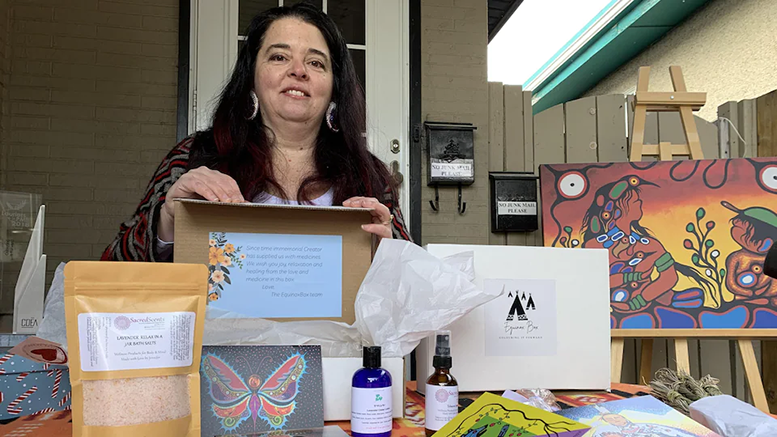 (ANNews) – We are in the midst of a pandemic – a challenging time, where our worlds have been reduced to ensure our safety and the safety of our loved ones. Self-care has never been more important, and Diana Frost is addressing this with the introduction of her EquinoxBox Subscriptions. 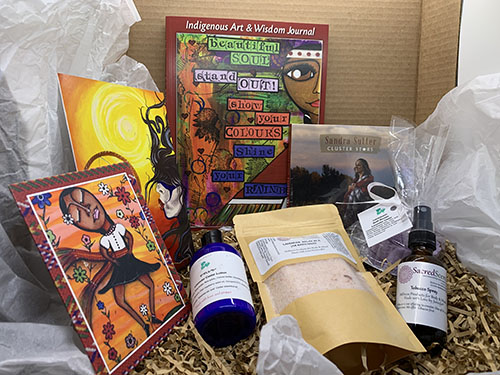 Frost, owner of Colouring it Forward, has launched an EquinoxBox that is curated with care every solstice and equinox to reduce stress, increase happiness and well-being through self-care with Indigenous products.

“We will deliver you a box every three months around the solstices and equinoxes,” said Frost.

“Each box offers you an elder’s blessings and teaching on the solstice or equinox and offers guidance on activities to bring more joy and peace to your life. They also include a variety of authentic locally made Indigenous self-care products to help ease your stress and increase relaxation and happiness. Each box is made with love, care and blessings for you by women.”

The 2021 Spring EquinoxBox is available for purchase while supplies last. The Spring box is on sale right now for under $75 CDN and contains more than $120 worth of art and products, including several that are made by Colouring in Forward. The Summer EquinoxBox can be ordered between March 21 and June 21.

The origin story of Colouring it Forward is quite magical. One early morning in 2016 Diana Frost woke from a very powerful dream that told her she was going to make a series of colouring books with artists and elders from different nations and that it would help people reconnect with Indigenous culture, art and wisdom.

“I woke up and thought, oh that is just perfect.” At the time Frost was still working as a water engineer so to consider such a radical career shift was daunting. “It was a bit hard for me to fathom how I was going to actually do that,” she laughs, looking back at Colouring It Forward’s beginnings. Then she got laid off while building on this dream in her spare time and took it as a sign. “When I got laid off, I said, ‘OK Creator, I got the message, this is my new path. My new path is art and wisdom (laughs).”

Frost wouldn’t fully realize her business dream until after she realized another of her dreams – to work on water and sanitation in developing countries. After a few years of volunteering and then leading water seminars in Latin America, she was ready to concentrate her efforts on culture.

Hearing Diana Frost talk about the evolution of her company, it’s clear her main driver is the love of helping others. Every project she’s helped create has much of the funding going toward a non-profit Indigenous entity.

Frost explains: “The Blackfoot colouring book donates to a Blackfoot non-profit charity. This year it is Bear Clan Patrol Charity who care for people in a state of homelessness, particularly Indigenous. The Cree colouring book proceeds go to a Cree non-profit etc. Original donations were for starting up a sweat lodge, so we paid for part of the materials to create that.”

Colouring it Forward has supported many Indigenous charitable organisations across Canada. For example, the Ojibwe colouring book supports the Kingston Indigenous Languages Nest with their Indigenous language revitalization programming.

“I produced a journal with a Cree Elder so I included that in our Equinox subscription box so people could work on their mental and emotional health. With the notebooks we are supporting Awo Taan healing Society, a lodge in Calgary who support young urban women coming out of an abusive situation. We also support Stardale Womens Group to help prevent suicide.”

The book and box projects that Frost is currently working on help fellow entrepreneurs, artists and musicians but also elevate the perceptions of the participating artists to their own work and worth.

“Some artists are doing well but there are other artists that were just about to give up. No one had ever given them an opportunity or helped market them.”

For example, the Dene book features such an artist named Michael. “I tried calling him but his phone was disconnected; I managed to reach him, explained the project and he was very excited but then asked, ‘Do you really think my work is good enough?’  I said yeah your work is amazing. So he said ‘You know, when you called I was considering going back to my labourer job of hauling cement and give up on my art altogether. And I said, oh you can’t do that, I won’t let you.”

If you are an emerging Indigenous artist or small business and think you have something that would be a good fit to continue promoting Indigenous Canadian culture through one of the Colouring it Forward projects, Frost wants to hear from you.

Shandro’s vaccine roll out in Alberta is failing First Nations