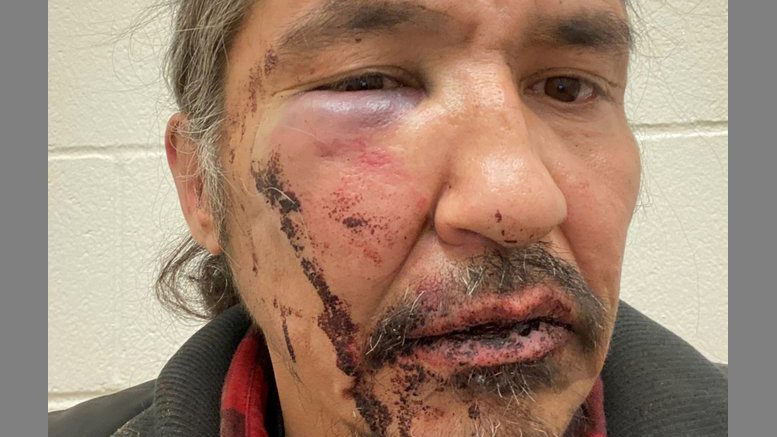 (ANNews) – On March 10, 2020 an Indigenous Chief was beaten by RCMP in  Northern Alberta. He was charged with resisting arrest and assaulting a police officer.

“The Crown reassessed the prosecution standard based on an examination of the available evidence including the disclosure of additional relevant material and withdrew the two charges,” Alberta Justice spokeswoman Carla Jones said in a statement.

Adam’s lawyer Brian Beresh said, “The withdrawal of these charges at this stage in the law, for our purposes, is a finding of not guilty. It is a true victory, not only for Allan Adam and his family, other Indigenous accused, but for our society generally.”

Chief Adam said, “I’m overwhelmed at the fact that the charges have been dropped because, you know, we knew — my wife and I knew — that we didn’t do nothing wrong,

“If we are to move forward in any capacity, then we need to seriously open our eyes, for each and every non-Native, to the realities that we, Indigenous people of the land (face),” Adam said.

When asked if he wanted to see the Officer who assaulted him fired, Chief Adam said, “If I ask for them to be charged or to be fired, what would that accomplish? … In this matter, I leave that up their peers.”

On June 24, 2020, the same day Chief Adam’s charges were dropped, charges against Const. Simon Seguin for an unrelated incident were brought to light.

In August 2019, the officer who charged, tackled, and beat Allan Adam was criminally charged with assault, mischief and unlawfully entering a dwelling house.

CBC News learned of the criminal charges against Seguin on Tuesday June 23. They had not been made public by RCMP.

“He did attend a residence while he was off duty and attempted to gain access inside this home,” RCMP spokesperson Fraser Logan said in an interview. “An altercation ensued with two occupants inside before he left the residence.

“This is not normal for us,” he said. “That is something that we are concerned about because, internally, we don’t know exactly why those charges weren’t made public. That is something we normally do.”

Beresh discovered through a court order that Const. Simon Seguin is set for a provincial court hearing in September for his own charges.

“Those events, which led to charges against him, occurred on Aug. 5, 2019,” he said. “As of this date, that police officer remains on full duty, not suspended, not fired.”

“His duty status would have been the result of an assessment made by his managers on his suitability to remain on duty,” spokesman Fraser Logan said in a statement. “These internal processes are independent of any pending criminal trial.”

Assembly of First Nations National Chief Perry Bellegarde said in a statement Thursday, “I’ve consistently said there must be a zero-tolerance policy for excessive use of force by police, which is under investigation at this time.

“The news that Constable Simon Seguin is still on active duty is unacceptable. The RCMP should suspend the officer…. First Nations see the assault on Chief Allan Adam as unprovoked and unforgivable. To re-establish trust, the RCMP must address incidents of brutality head on.”

Alberta Premier Jason Kenney said the Police Act is under review by the province and there will be a focus on racism and abuse of authority. “We know, like in any walk of life, there are some bad apples. And police services, especially because of the extraordinary powers that they exercise, must be particularly careful.”