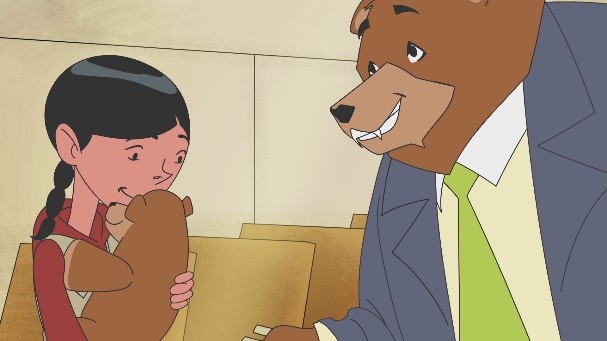 Radiant Goes to Court explains basic concepts of court and common testimonial aids for children.  Featuring Cree actor Lorne Cardinal as the voice of Muskwa the Bear, this 3 minute cartoon has been nominated for AMPIA’s Rosie Awards for Best Children’s Program or Series as well as Best Production Reflecting Cultural Diversity. Animation of the cartoon was led by Edmonton’s Pulp Studios Inc.

The cartoon and its accompanying coloring book has been distributed to Victims Services Units across Alberta to help children prepare to testify in court.

BearPaw Media Productions is funded by the Alberta Law Foundation and has been producing Legal Education videos for the Indigenous community for over 40 years.

The Executive Producer of Radiant Goes to Court, Dr. Patti LaBoucane-Benson, (and author of the 2016 Burt Award winning graphic novel, The Outside Circle) says that creating the cartoon was about communicating effective legal education for a young audience.

“Many of the young children who testify in court have witnessed or experienced traumatic events.  Radiant Goes to Court was designed to help comfort children about their upcoming testimony by demonstrating the supports that are available to them by law.”

Some of those testimonial aids include having support people nearby, being able to hold a toy and the use of privacy screens.