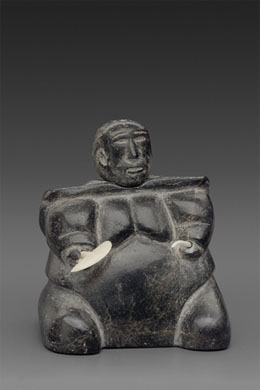 SASKATOON — On November 30, the University of Saskatchewan (U of S) announced the donation of the largest gift of Inuit art in university history, by alumni Norman Zepp (BA ’76) and Judith Varga (BA ’76).

The Norman Zepp-Judith Varga Collection—donated to the University Library—includes more than 200 sculptures, dozens of prints and drawings, and five wall hangings, predominantly from the Keewatin region of Nunavut. It also includes a vast set of photographs and original interviews with Inuit artists. The Canadian Cultural Property Review Board certified the collection this year as having “outstanding significance and national importance.”

Zepp and Varga have travelled the northern-most part of Canada to research the art created by the Inuit people and have cultivated a nationally-recognized collection over the course of nearly 50 years.

“This would be a remarkable collection even if the art weren’t included,” noted Tim Hutchinson, university archivist. “The interviews and archival material provide unique insight into the lives of Canada’s northern artists—indeed it is likely the only in-depth documentation available about many of the artists. This is an invaluable addition to our research collections focusing on the North.”

Zepp, an independent art curator, started collecting Inuit art when he first attended the U of S as an art history student in 1969. He developed his expertise in the area when he established the Inuit art department at the Art Gallery of Ontario and helped found the Museum of Inuit Art in Toronto in 1985.

Zepp has spent his lifetime studying and working with the Inuit people and their creations, including research trips to Nunavut, where he, and at times Varga, stayed with the Inuit artists in their homes to understand the origin of their artwork. Some of the most iconic pieces in the collection are the detailed carvings of caribou. Zepp said the Inuit people of the Keewatin region relied heavily on the animal for their existence—for food, clothing, shelter and tools— and the reverence for the animal is reflected in the art.

Zepp has also been involved in curating other notable Inuit art donations to the university. In 2015 he helped the University Art Collection showcase Inuit art sculptures donated to the Edwards School of Business by alumnus Sam Schwartz. He also curated the Henry and Cheryl Kloppenburg Collection of Inuit Sculpture, which was gifted to the College of Agriculture and Bioresources in 2011.

“With the published collections of university libraries being increasingly based on electronic resources, it is rare and unique collections like this one that set us apart,” noted Charlene Sorensen, the library’s interim dean. “We are so thankful to Norman and Judith for entrusting the University Library with this collection. I look forward to a time when we will be able to have much of the art on permanent display, as an inspiration for students and other visitors to University Archives and Special Collections.”

The Norman Zepp-Judith Varga Collection will be on display in the Link area of Murray Library until the end of January 2017, and will be available for students and researchers to use in their work through University Archives and Special Collections.

Learn more about the collection in this special video, narrated by Norman Zepp.