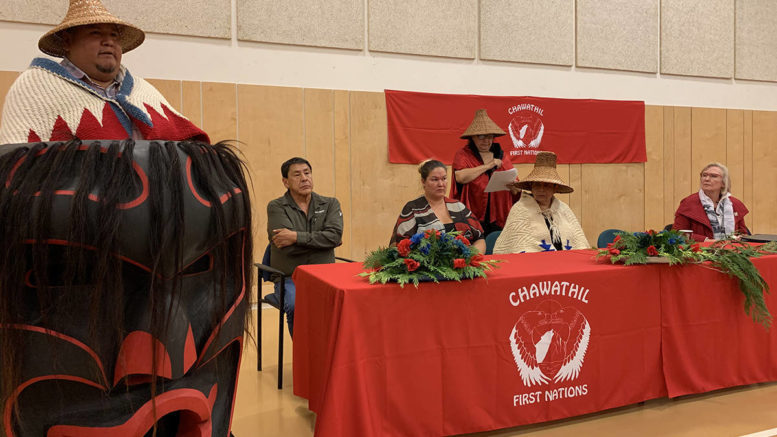 On August 27 2019, Carolyn Bennett, Minister of Crown-Indigenous Relations, and Chiefs and community members from the Popkum, Chawathil, Shxw’ōw’hámel, Skawahlook, Yale, Peters and Union Bar First Nations celebrated the settlement of their specific claims. These negotiated settlements resolve a legal obligation owed by Canada to these First Nations when a reserve they held in common was transferred in 1959 to the then-newly formed Seabird Island First Nation without meaningful consent or compensation.

“Resolving historical grievances are critical to renewing the relationship and advancing reconciliation with Indigenous people,” stated Minister Bennett. “These specific claims settlement with the Popkum, Chawathil, Shxw’ōw’hámel, Skawahlook, Yale, Peters and Union Bar First Nations not only right a past wrong but provide these First Nations with financial compensation that they can invest into the wellbeing of their communities.”

The specific claim settlements will provide each First Nation with just over $21.4 million in compensation for the current value and loss of use of their interest in the Seabird Island Reserve.

“This has been a long road,” stated Popkum First Nation Chief James Murphy. “We filed this claim well over a decade ago. When Canada rejected the claim we took it to the Specific Claims Tribunal and won. Our victory at the Specific Claims Tribunal proves that the process works. We are grateful that we have access to an impartial process to resolve historical issues and we commend Canada for negotiating an honourable settlement with us.”

“The settlement funds from this claim will allow us to purchase more land within our territory and make an application for addition to reserve to expand our future economic opportunities.
“As the descendants of our past leaders that had the wisdom and always held the vision and well-being of forming a land base for their families, we remain respectful to carry on this tradition in a good way for the benefit of our future generations,” concluded Chief Rhoda Peters, Chawathil First Nation.

“Our hands go up to the 7 First Nation leaders and the external governments for bringing closure to this landmark decision.”

The Seabird Island Reserve, which is approximately 3,920 acres, was originally allotted in common to these seven First Nations in the 1870s. In 2014, the Specific Claim Tribunal determined that Canada had breached its legal obligations when it transferred the reserve without providing the seven First Nations any compensation. In 2017 the specific claims were accepted for negotiations.

Should the First Nations choose to purchase land, the settlement agreements enable each First Nation to request reserve status for up to 560 acres of land, subject to Canada’s Policy on Additions to Reserve/Reserve Creation.

To date, Canada has settled 522 specific claims through negotiated settlements with First Nations across the country.