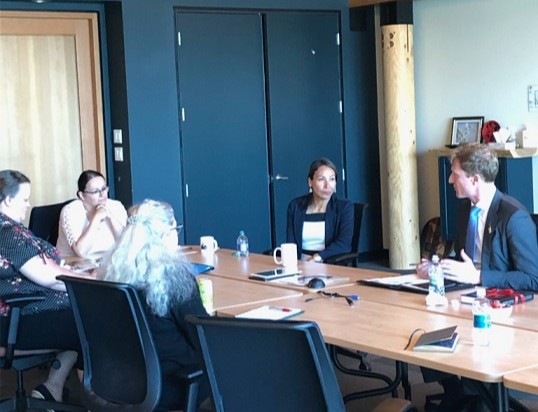 The specific claim involved the unlawful taking of timber revenues from logging operations on the First Nation’s reserve land by an Indian Agent between 1925–1929.

The settlement agreement provides the K’òmoks First Nation with $495,731 in financial compensation.

“Settling this long held claim is an important step in addressing a past wrong with K’òmoks First Nation,” stated Miller. “Negotiated settlements advance reconciliation and help us build a better Canada based on recognition of rights, respect, co-operation and partnership.”

Negotiated specific claim settlements help to right past wrongs, renew relationships and advance reconciliation for the benefit of First Nations and all Canadians.

“I’d like to begin by thanking and acknowledging the Parliamentary Secretary for coming to K’omoks First Nation and addressing the Lomas specific claim,” stated Chief Rempel. “By acknowledging past wrongs committed against K’omoks First Nation and its members and taking corrective action to right those wrongs is a positive step in the direction of reconciliation. While reconciliation is not a singular destination, when we open our hearts and minds to the notion of Indigenous rights and the 150 years of wrongs committed against the Indigenous peoples of Canada by the Crown, we move forward in a positive way. If in the spirit of reconciliation, we recognize and respect those rights and begin correcting the actions committed against them, we are truly on the path to achieving respectful relations between the Crown and the original peoples of Canada.”

The K’ómoks First Nation is located in the heart of the Comox Valley on Vancouver Island. Membership is currently 336 members within four clans: Sathloot, Saseetla, Ieeksun and Puntledge. Two cultures are identified in their community: Coast Salish (Island-Comox speaking peoples) and Kwakwaka’wakw (Kwak̓ wala speaking peoples).

To date, Canada has settled over 500 specific claims through negotiated settlements with First Nations across the country.