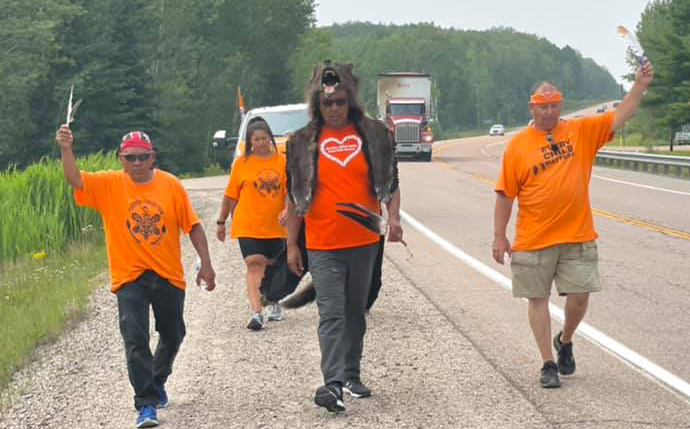 Chief Vern Janvier and members of the Chipewyan Prairie First Nation are walking from Sudbury to Ottawa to increase awareness of the shackles of the Indian Act. (Facebook Photo).

(ANN) – Last month, members of the Chipewyan Prairie First Nation and their Chief began a walk to Ottawa in order to bring awareness — and hopefully change — to the monumental Canadian legislation known as the Indian Act.

The movement is known as the “Blinding Light Walk – Tiger Lily” and the organizers are attempting to remove certain, unspecified policies within the Act.

While the Chipewyan Prairie First Nation is located in Alberta, the 500 km walk began in Sudbury, Ontario on July 18, 2021. The group is walking 20 kilometres per day and projected themselves to reach Parliament Hill within four weeks.

“The children have risen for change. To peel back the layers of the Indian Act and change the very policies that put them in the ground.”

The Indian Act was created in 1876 and is the primary legislation used by the Government of Canada to administer Indian status, First Nation Governments, and outline the obligations the Federal Government has to First Nations people.

However this is not the first walk under the “Blinding Light” belt, as the Chipewyan Prairie First Nation held a 140 km walk on Canada Day to honour the lives of those lost in the Residential School system.

“We did a walk at home from Canada Day. We walked to Fort McMurray. It’s about a 140 km walk, with this group plus a whole bunch of others. Out of that, we just kept going,” said Janvier.

The group has been documenting their walk on their Facebook page, The Blinding Light Walk – Tiger Lily Facebook Page, as well as providing information on the Indian Act, the United Nations Declaration on the Rights of Indigenous People (UNDRIP), and residential schools.

Chief Janvier emphasized that the Residential School system was an extension of the Indian Act, “The Roman Catholic Church and other churches worked for the government of Canada under the Indian Act. We still live under that policy today. We’re still shackled to that old colonial law. It’s a law of obedience and it’s a law of control.

“We have no control over our life today. It’s just like they did back then. They took our children and did whatever they wanted. The destroying of the Indian is what it’s all about.”

“We just want to make Canada a healthy place, an equal place for all – including anybody that comes to Canada for safety. We want to see the Act dealt with in a way that it was meant to be under the Treaty where we are in equality under the rules of Canada,” concluded Chief Janvier.