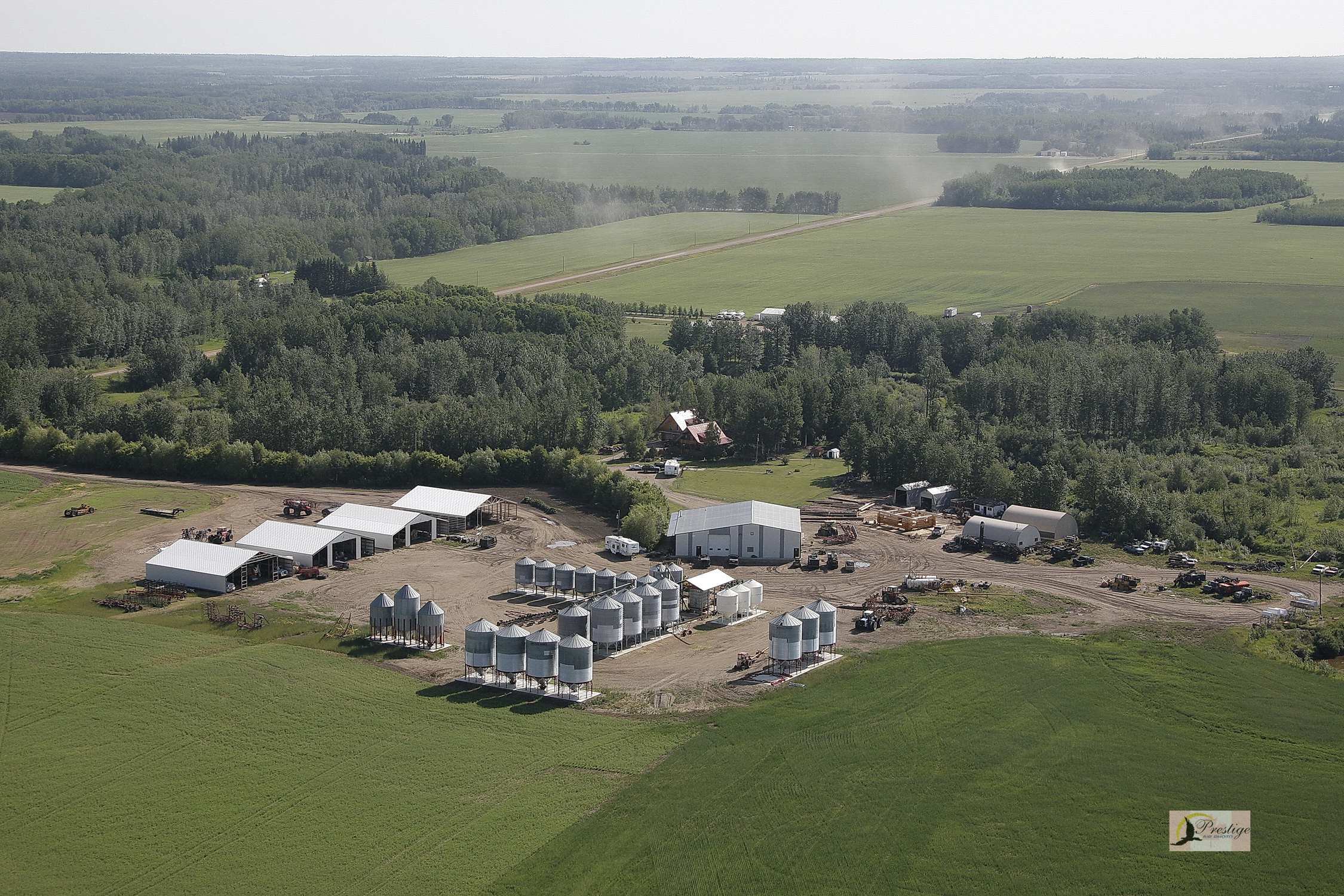 Clarence Hawryluk bought his first water truck back in 1979 and his first seismic drilling rig in 1981. During the last three decades he and his wife, Roberta, have worked long and hard to accomplish their goals and to realize their dreams. Together they own and operate Black Gold Farms (1981) Ltd. and Black Gold Drilling, a seismic drilling company that has been operating since the early 1980s.

“We provide a range of services that includes seismic drilling, water hauling, trucking, gravel-hauling, snow-plowing and forest fire protection,” noted Roberta, who heads up the company’s communications department. “We employ four full time employees throughout the year, but that number can reach 25 or 30 during our busy seasons.”

Black Gold Drilling, she explained “got its name  from the canola seed and the oil called Black Gold – (you remember the Beverly Hill Billys?) – because it was worth something back in those days. We are hired by geophysical and exploration companies, most of which are based in Calgary. We go into an area and do the drilling exploration; the company that hires us determines whether or not what we find is worth further exploration on their part. Depending on what needs to be done the oil companies select the appropriate drilling company. If they think there’s enough oil to warrant further drilling, they’ll send in the big rigs to extract the oil.”

In the early years Black Gold had little competition, but as the regions in and around the oil sands of northeastern Alberta and the oil-rich lands in northwestern Alberta drew greater interest and participation from the major players in the oil and gas sectors, competition grew.

“The growth has been steady and competition is a good thing,” noted Hawryluk, “but today most of the smaller companies have sold their businesses to major corporations who are capable of providing every service, thus making it more difficult for smaller ventures to succeed and grow.”

Black Gold Drilling, however, does have an advantage, of sorts.

“We are an Aboriginal owned and operated company,” explained Roberta, “and we are pleased to note that many of the First Nations whose lands are being utilized by the oil and sector conglomerates prefer to have some Aboriginal input. As a result we are urging them to contact us for their seismic drilling needs. We also urge companies that are already working on a project or about to initiate a project to contact us and include us when working in or near a First Nations or Métis community. Black Gold is not only Aboriginal owned, but it is also an environmentally-friendly company and one that understands and appreciates the wishes of First Nations that their lands remain clean and healthy for the next generations.”

Roberta is a member of the Yukon’s, Carcross Tagish First Nation; she met and married Clarence in 1984. Clarence, born in Berwyn, Alberta, was raised in Harmon Valley, where his dad, a Ukrainian immigrant, worked hard to provide for the family until his death in the summer of 2005.

“We have five children,” noted Hawryluk, three sons and two daughters. Two of our boys, Bond and Brendan, work for the company full time, but all of our kids have helped in one way or another over the years and by doing so have helped to contribute to our growth and our success.”

If the success of a business is measured by the number of vehicles and equipment in its inventory, Black Gold has a step up on most. That’s because the company now owns four LIS seismic Drills, three Water Bombis, three Morookas Water Tracs, seven water trucks, a Cat tractor with blade, a snow Cat with blades, two tow tractors, a truck and trailer, and numerous other pieces of equipment.

“We are well equipped to deliver on time and within budget and we have an excellent reputation for doing the job right the first time around,” she added. “Most important is the fact that we have established and maintained good relationships with everyone doing business in our region – even with our competitors. We often need to call in other drilling companies to help us complete a project and likewise, when they need extra help or assistance, we’re there to answer the bell.” 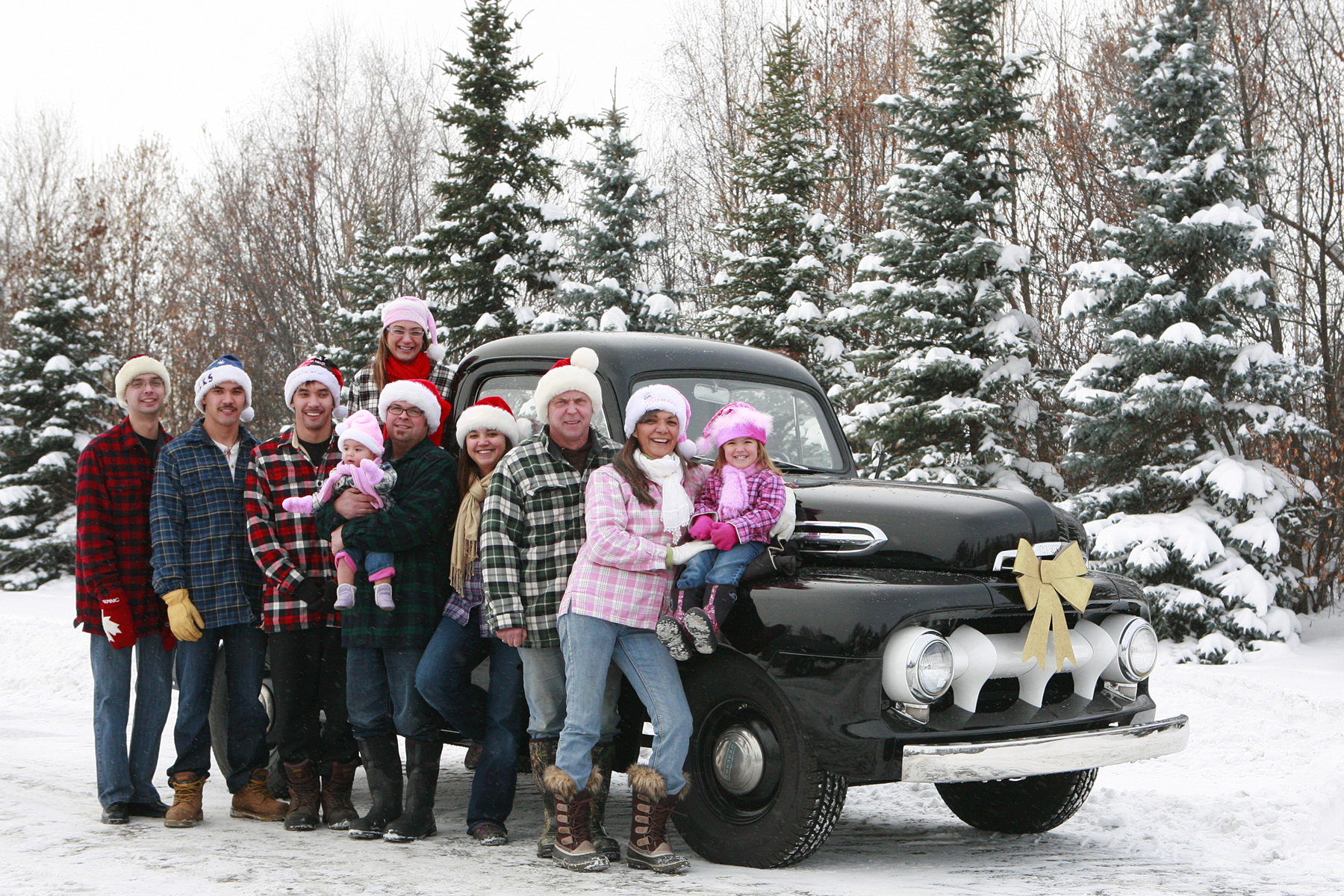 A family business: (L to R) Derek, Bond, Brendan, Trevor Provost, Kristy, Clarence, Bert, Eva. Trevor is holding Isabella, and Terry is in the back of the pickup.

“Employee training and the maintaining of good relationships has also gone a long way in helping us to succeed, added Hawryluk. “Quality and consistent employees are sometimes difficult to find, but I must say we’ve had much good fortune in this area,” she assured. “Take Glynn Kilborn, for example. He joined Black Gold in 2001 and is currently our longest serving employee. Welder/operator Kelly Little joined us in 2010. Kenny Laybourne is a year-round truck driver and vehicle maintenance man who joined us in 2006. Jim Screpnek has been with us on a seasonal basis since 1999 and water truck driver Pete Choquette, also a seasonal worker, since 2009.”

The company, noted Hawyrluk, is also very proud of its safety record and the fact that is holds a Health and Safety Certificate of Recognition. Black  Gold Drilling is registered and in good standing with the Compensation Boards in Alberta, B.C. and Saskatchewan. The company is a member of the Canadian Association of Geophysical Contractors (CAGC) and Enform, an international organization with more than 50 years of experience and expertise in the delivery of world-class petroleum industry training courses and safety initiatives.

CAGC’s mandate, allows it to work proactively to develop and maintain a business environment in which the geophysical and support industries can earn a fair rate of return on invested capital and provide new employment opportunities for Canadians.

For information about Black Gold Drilling, check out the website at www.blackgolddrilling.com or call (780) 322-2123.