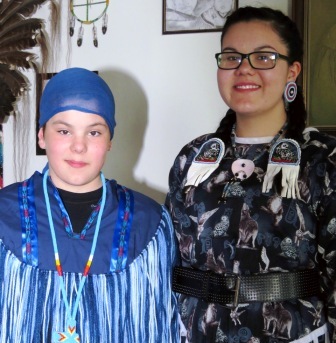 The Annual Ben Calf Robe Powwow, held earlier this month, is a wonderful cultural event which launches the beginning of the Powwow season in Alberta but it’s just one of many exceptional initiatives of the Ben Calf Robe Society (BCRS).

The organization’s  motto reads: “Our children are sacred: our work strives to protect and enhance this sacredness by providing children and their families with holistic education, supportive social services and programs of high quality and cultural relevance.” To meet this goal the Society offers several unique programs and initiatives to help support children, women and families. One of the entities supported by the Society is the Ben Calf Robe School, the first of many initiatives created over the years by the forward-thinking Society. When BCRS was first established in 1980, the concerned members were reacting to an 80 percent high school drop-out rate of Aboriginal children in Edmonton. The solution was to establish a school where Aboriginal children felt accepted, culturally comfortable and would be encouraged to remain in school and complete their grade twelve. With the collaboration of the Catholic School Board, the Ben Calf Robe Society school was created. 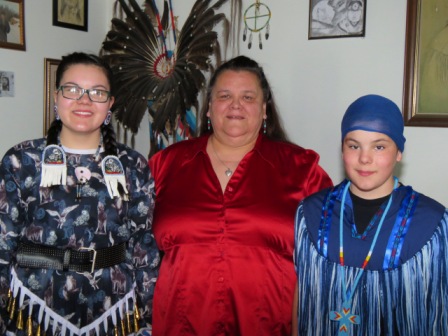 Marie Matchee is flanked by dancers Kennedy (16) and Roman (13) Brown-Matchee. Kennedy made the beautiful jingle dress that she wore to the 2015 Ben Calf Robe Powwow as well as the regalia worn by her brother.     Article and photos by John Copley

“The school has been a wonderful source of education and one that we have been very involved in for a good many years already,” smiled Marie Matchee, a mother, auntie, grand aunt and Kinship Care giver who’d invited me to her home for an interview about her family’s participation in the annual Ben Calf Robe Powwow, and to take some pictures of her niece Kennedy Brown-Matchee, and her nephews, Roman and Gabriel, who help their sister Kennedy create and decorate powwow regalia for the family.

“The kids have all attended the Ben Calf Robe School over the years,” explained Matchee, who participates at the school as a member of the parent council board. “Kennedy was in the Head Start Program 12 years ago; that’s where she first learned to dance and where she came to love the powwow. Roman, 13 and Gabriel, 12 both attend Ben Calf Robe School.”

All of the children are doing very well in school; both Kennedy and Roman say their favourite subject is math. Roman, who also enjoys gym, wants to pursue a career as a police officer. He is currently averaging 89 percent in math.

“It just comes natural I guess,” he grinned; “I’ve always liked math and do okay at it.”

“Both Edgar and I have a great deal of respect for BCRS and their staff, and the excellent job they do to embrace Aboriginal families by opening the doors to resources so that children are able to reach out and achieve their goals in life,” emphasized Matchee. “Yes, the kids are all doing very well in school and in life in general; a great deal of that success comes because of the love and understanding that BCRS incorporates throughout its ranks. We owe them a debt of gratitude.” 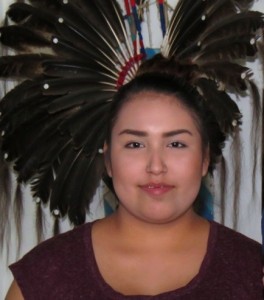 Kennedy, her brothers Roman and Gabriel and friend Shanae Littlechild all participated in the recent Ben Calf Robe Powwow. Older sister, 21 year old Natasha danced when she was younger. She is currently seeking employment in the health care industry; she gained her experience in a program offered by Norquest College while she attended high school.

Sixteen year old Kennedy, is a Grade 11 student currently enrolled at St. Joseph’s High School. She plans to pursue her post secondary education in Lethbridge. She wants to become a teacher,  with a business degree and she also has political ambitions.

“I’d like to return to my community as a teacher; I’d also like to earn a degree in business,” she explained. “My goal is to one day become Chief.”

Kennedy’s idol is Roberta Jamieson, President and CEO of Indspire. A well-known and respected lawyer, and the first Aboriginal woman to earn a law degree in Canada, Jamieson was also the first non-Parliamentarian to be appointed an ex officio member of a House of Commons committee, and the first woman ever appointed as Ontario Ombudsman.

“I actually got to meet her; it was one of the most exciting days of my life,” she smiled. “She is an amazing woman and someone I would definitely like to model myself after.” 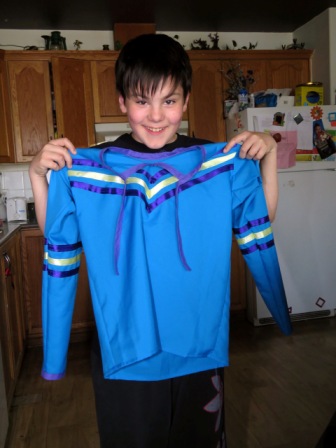 12 year old Gabriel Brown-Matchee shows off the ribbon short he made with some help from his sister, Kennedy.

Gabriel Brown-Matchee is also gifted with the ability to fashion his own powwow regalia. The beautiful ribbon shirt he held with pride was his latest creation, but certainly won’t be his last.

Marie Matchee doesn’t dance in the powwows but together with long-time friend and partner Edgar Gladue, she supports every activity the kids are interested in pursuing, including the powwow.

“We are joint Kinship Care Givers and we are very supportive and we attend about three major powwow events each year,” nodded Matchee, noting that “we believe that it is important for the kids to know their culture, participate in traditional games and events and visit their extended families so they don’t lose touch with one another. We also like to attend the powwows at Meadow Lake and Waterhen in Saskatchewan.”

Marie moved to Edmonton years ago and only recently connected with family on the Meadow Lake LFD. She was born in Ile-a la-Crosse Saskatchewan and raised by her grandparents (mother’s side) on the Canoe Lake First Nation, Marie was unfamiliar with the powwow culture when she moved to Edmonton but with children attending Ben Calf Robe School, she put her nose to the grindstone.

“I read up on it, I talked to people about it, and gleaned an education just about any way I could,” she smiled. “It’s been a very rewarding experience; the kids really enjoy dancing and Kennedy has learned to sew and to cut patterns and is making powwow regalia for other members of the family.”

Both Matchee and Gladue are firm believers in supporting and encouraging children of all ages to reach out and achieve their goals, something they say is lacking a bit today because modern technology has turned potential workers into slackers and could-be success stories into game-playing, TV-watching addicts who no longer want to hunt or fish, gather berries or trap furs.

“I think it’s important that our children maintain their cultural identity and respect the traditions set down by our grandparents and Elders,” said Matchee, explaining that she is a bit surprised and saddened when she sees so many people ignoring their culture for bright lights and electronic gadgets.

“The older generation, in fact the last two generations,” she said, “have created laziness and dependency. No one wants to hunt anymore, there is almost no trapping. I think there is too much addiction to this new wave of communication and game playing devices and it is keeping our younger people from playing an active role in their families and communities. We grew up picking berries and tanning hides and that is how we made our living. Edgar teaches the children about traditional and cultural values; he teaches them how to hunt, how to prepare the kill and how to tan the hide so it can be taken to market. This is what we need to be teaching our children.” 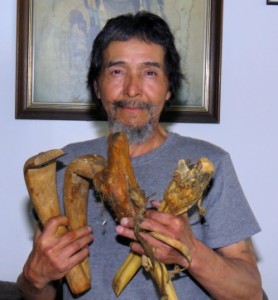 Edgar Gladue works with hides using tools designed and built by his grandparents.

Edgar Gladue is a roofer by trade. Raised on a trapline on the Sturgeon Lake Reserve, he understands the value of a cultural and traditional education.

“I spent the first six years of my life in the bush, raised my grandparents,” noted Gladue. “It is difficult for parents today; we are all still learning and coping with the fallout from the residential school era. The residential schools took the parenting power away. Those who were forced into residential schools lost the ability to parent and we need to get that ability back. It is becoming a little better today when it comes to our kids learning their culture. That’s because there is a growing number of cultural camps and traditional teaching courses available to youth. The interest is beginning to grow and hopefully will continue to grow throughout each of the province’s Aboriginal communities.”

Gladue spoke about the importance of maintaining languages, cultural knowledge and traditions, noting that the things he teaches the children in his care are much like what his grandmother and grandfather taught him. Both he and Marie speak fluent Cree.

“When I was a kid there was no TV, there were no distractions. I watched my grandmother and I watched my grandfather and I learned everything you need to know about looking after your family, caring for the environment and maintaining traditional values. There was a time when there were no schools and no “proper” parenting manuals; a time when we as (Indigenous) a people worked together, where every person had a role to play, a task to fulfill, an expectation to meet. We managed just fine.”

Even today Edgar uses the hide-tanning tools handed down to him from his mother and grandmother, “tools that scrape flesh from the hide and hair from the hide.”

The tools, made from large pieces of bone, are known as a “flesher” or Mihkikwan and a “hair scraper” or Mahtiagun, and “are essential tools needed to do the job the right way.”

In closing, Marie Matchee stressed the importance of raising children to be outgoing, confident, and successful. The children, she said, are the future and if it is to be a long and fruitful one, then the children must excel. To do that they need to be heard.

“Kids need to be supported, their ideas need to be heard,” she said. “Give them a little understanding and encourage their efforts. If you want a child to succeed in the future you have to give them the opportunity to try, to fail and to learn from their mistakes. You must be positive if you want them to succeed. Sometimes I think parental negativity and impatience are inhibiting the growth of many Aboriginal children. Teaching values, beliefs, language and culture are so important, we all need to become more involved in helping to ensure that our children are capable, educated and able to face the future without fear of failure.”