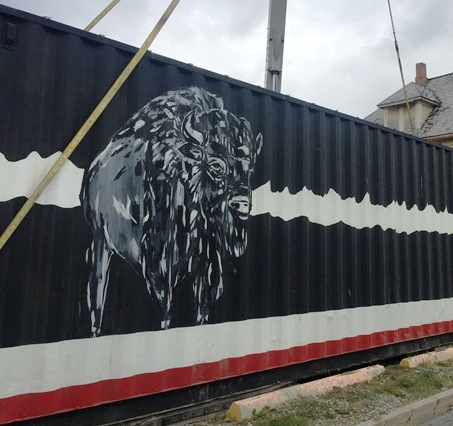 Calgary, AB – On July 4, Springboard Performance’s Fireflies at Twilight containR mural installation makes way to east Victoria Park. The installation created in honour of this land and peoples of Treaty 7 Territory will be located at 12 Ave SE and MacLeod Trail through to November 2018.

“A little while and I will be gone from among you, whither I cannot tell. From nowhere we come, into nowhere we go. What is life? It is a flash of firefly in the night. It is a breath of a buffalo in the wintertime. It is as the little shadow that runs across the grass and loses itself in the sunset.” – Chief Crowfoot

“I am honoured to be a part of the containR project, the re-imagining of the container in public space is exciting, containers are becoming prominent objects on the landscape. Therefore they deserve our attention and thought on how to integrate them more harmoniously into our environment,” remarked Adrian Stimson, visual artist. 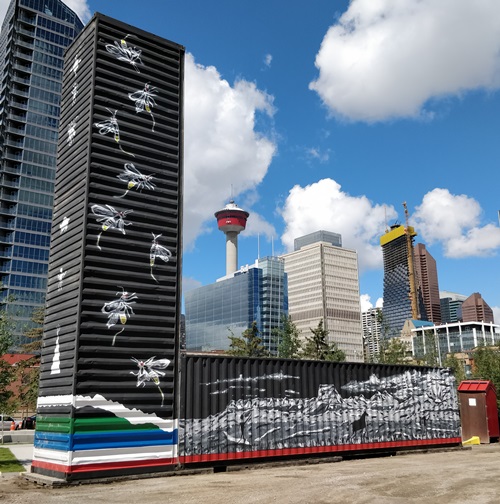 Fireflies at Twilight by visual artist Adrian Stimson will remain on display in Calgary until November 2018.

“Fireflies at Twilight gave me the opportunity to visualize Chief Crowfoot’s last words, like Writing on Stone, the surface of the container offered me an opportunity to explore the theme in a unconventional way, to tell stories. The Fireflies, the bison, the landscape, re-imagined petroglyphs, Treaty Seven, Chief Crowfoot and his last words, combine to make space for Indigenous knowledge and understanding. To understand the territory we all inhabit, to inspire youth and all people in finding themselves in those stories. I believe art can inspire change, the containR can hold those stories and be that space where we can re-imagine our relationships to each other and the land we inhabit.”

“The inspiration for the Fireflies at Twilight mural came in an ephemeral flash, just like a firefly twinkly, a setting sunset, and the breath of a buffalo,” elaborated Nicole Mion, Springboard Performane Artistic Director.

“Through the synergy of the creative build and design team, and exceptional artistry of visual artist Adrian Stimson, Fireflies at Twilight honours this place, its history, its artists, and the visionary leaders that have realized the possibility of this location, that we now call Calgary.

“containR has always worked to connect communities through art, and we hope with this installation to create opportunities for all Calgarians, including indigenous and non-indigenous youth, to add to the containR installation, to inspire individuals to tell their stories.” 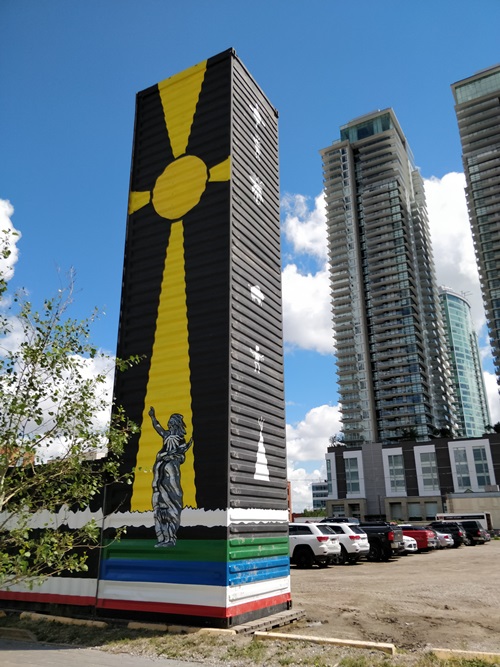 Fireflies at Twilight installation at Victoria Park in Calgary.

Calgary Municipal Land Corporation (CMLC) – the placemaking and development team that is leading the Rivers District Master Plan for east Victoria Park has partnered with Springboard Performance to help realize a temporary mural installation adjacent to Enoch Park. The installation marks the second placemaking gesture in the district as CMLC works to advance the master plan vision for Calgary’s future Culture and Entertainment District.

“As we’ve expanded our focus into east Victoria Park through the development of the Rivers District Master Plan, this installation was an opportunity to help activate the street-level and bring people into the district,” says Clare LePan, Director Marketing and Communications. “We’ve previously worked with Springboard Performance on their containR project in East Village and saw this installation as a small gesture for the type of placemaking programs that we feel are important in starting to craft new experiences in the community.”

This project was realized with the support of the Calgary Foundation and the Community Fund for Canada’s 150th, a collaboration between Calgary Foundation, the Government of Canada, and extraordinary leaders from coast to coast to coast, as well as a CIP Community Investment Program Grant, offered through the Government of Alberta. CMLC supported the project through production support and the site location adjacent to Enoch Park on land owned by the organization.

Fireflies at Twilight will be in place until November 2018.

containR is a pop-up art park made of retrofit shipping containers that connect communities through art and creative hubs. It is an urban creation lab with a mix of events that encourages broad participation in artistic and social life in Calgary’s public spaces with culturally-diverse programming and creative placemaking. Each containR location is temporary, unique in design, and is programmed to feature local and emerging artists from a range of disciplines.  containR premiered at the Vancouver Winter Olympics where it featured Alberta artists to the world. containR has gone on to animate communities in Calgary at East Village, Sunnyside, Marda Loop, and Forest Lawn. containR encourages a re-imaging of place and the community hub through curating compelling programming in urban space.