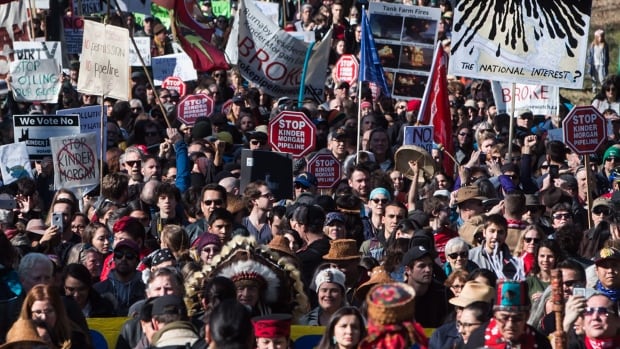 December 8, 2018, Montreal—As the COP24 climate conference got underway in Poland, Indigenous leaders from British Columbia and Quebec were united front and centre today at the ten-thousand-person climate rally in Montreal, where opposition to the Trans Mountain Expansion pipeline is the strongest in the country (Report here). The Indigenous leaders delivered a message of solidarity.

“Today First Nations in Quebec stand with First Nations in British Columbia. Trans Mountain will not be built and Energy East will never see the light of day,” said Grand Chief Serge ‘Otsi’ Simon of the Mohawk Council of Kanesatake. “The realities of climate change demand an unprecedented level of ambition and any new project that allows oil sands expansion is inconsistent with what the science dictates.”

The Trans Mountain pipeline would expand oil sands production beyond what is safe for the climate and planet. Canada is not even able to meet the Harper-era emission reductions targets that the UN says are not strong enough to prevent climate chaos. Today, oil sands production has never been higher and yet industry, without strong government leadership to help Alberta diversify and create new jobs, continues to push for endless expansion.

“More pipelines mean more oil sands expansion which means Canada will fail us all on climate,” said Kukpi7 Judy Wilson, Neskonlith Indian Band and Secwepemc Nation, and Secretary-Treasurer of the Union of BC Indian Chiefs. “The Canadian government ignored our lack of consent during the first Trans Mountain review and is making the same mistakes again—hurrying the process, failing to listen, predetermining the outcome. Another court challenge is looking inevitable.”

The Indigenous leaders were representing some of the 150 Indigenous Nations in Canada and the US who have signed the Treaty Alliance Against Tar Sands Expansion in opposition to the Trans Mountain Expansion pipeline and other attempts at expand tar sands production, including Enbridge’s Line 3 and TransCanada’s Keystone XL pipelines.

“We are proud and blessed to have an entire movement of people of all ages and backgrounds that have fought and continue to enforce the ban against oil sands expanding pipelines,” said Rueben George of the Tsleil-Waututh Nation’s Sacred Trust Initiative.

Organizers for the march also spoke out against the Trans Mountain pipeline. “Quebec has firmly refused any oil pipeline project that would increase oil production. Today, the Trudeau government is trying to find in the west what it could not find in the east, that is to say, outlets for a dirty oil that must absolutely remain underground. The era of fossil fuels is over, and Mr. Trudeau must act accordingly. That is why we will continue to stand together against Trans Mountain for as long as the government persists,” said Nathalie Roy, member of The Planet goes to Parliament, organizer of the last 50,000-people march for climate action.