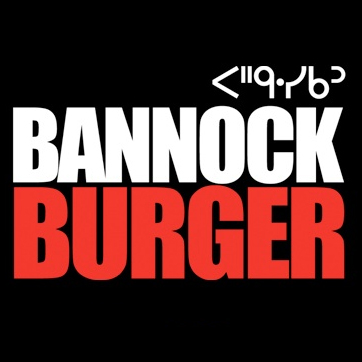 There’s a new burger joint in Alberta’s capital city and it’s located on the corner of 124 Street and 107 Avenue. The concept of the newly opened restaurant is far from new; hamburgers have been available since the early 1950s, but the product being sold by entrepreneur Jules Thomas, goes back much further than that. In fact, his product is as old as the First Peoples of Turtle Island.

“Bannock,” explained Thomas, “has been a staple food for Aboriginal peoples since the beginning of time. It’s a blend of water and 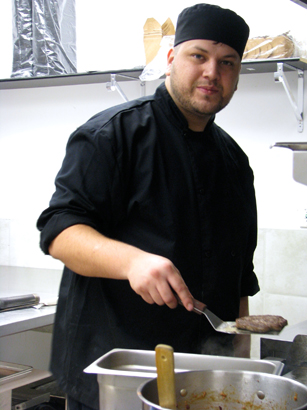 Head Cook Cody Thomas says the Bannock Bison Burger is one of the house favourites.jpg

flour, sugar, salt and baking powder and just the right amount of know-how to make it perfect every time. I remember waking up in the morning as a young child to the welcoming aroma of freshly baked or fried bannock; it was a speciality of my kookum who served it up with almost every meal. It’s great with bologna, it’s delicious with peanut butter, it’s particularly tasty with a slice of cheese and a spoonful of jam. It’s an age-old staple that tastes good, keeps you warm and fills your belly for the better part of the day. Bannock Burger is a place where you can come to enjoy a good meal at a good price. The food is always fresh, the coffee’s always hot and the service is always friendly. Bannock Burgers are the house specialty and they’re just $5.95, but we have a very good selection of items on the menu.”

The newly opened eatery features bannock in a number of mouth-watering menu choices that include Bannock Tacos, Dogs and the scrumptious Bison Burger; it even comes with chicken in the form of tasty salad dish.

“We also have various types of fries, chicken fingers, poutine and various burgers, including a veggie burger for those who have a lighter diet,” noted Thomas. “We will likely add a few more items on the menu as time goes by, but our first priority now that we are open will be to keep our customers happy and put the final touches on the interior decor.”

Thomas has been operating his bannock burger business on and off for the past few years. He began selling his burgers at Aboriginal cultural events and then last summer expanded into Churchill Square where he took part in The Works festival. His new location, however, is just what the doctor ordered.

“I’ve wanted to set up in a more permanent location for some time now,” he smiled, “and I think we hit it lucky by being able to set up so near to the downtown core. It’s an ideal location, especially for the lunchtime crowd and mid-afternoon munchers. Our prices are great and the food is good and I see that people are coming back. I think they like what we have to offer.”

Jules Thomas was born in Grand Prairie and raised in Slave Lake, Calgary, Edmonton and Wabasca. He’s a member of the Sturgeon Lake First Nation and though he doesn’t live in the community he has many relatives and friends who do. He was born into a family that suffered from chronic alcoholism and as a result wasn’t fortunate enough to receive the early childhood nurturing that might have helped to ensure a stable life, a good education and a promising career. 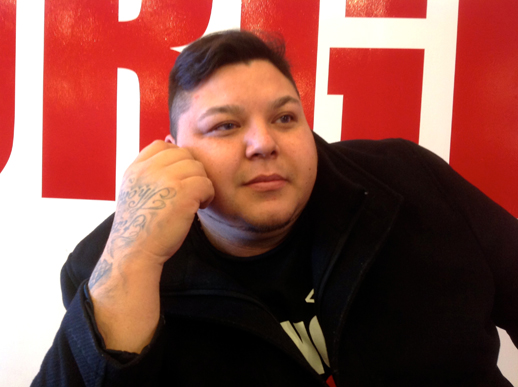 “My dad was an alcoholic and he abandoned us; for awhile, my mom drank too much as well,” said the 31 year old businessman. “I was in and out of trouble most of my life and didn’t change it for the better until I was 26 years old. I drank too much, stole a lot of things, sold weed, cocaine, did time in jail – you name it and I might have been involved in it.”

It was after the death of his brother, Fabe, who passed away in hospital following an accident he suffered while riding on a stolen dirt bike, that Jules Thomas began to give his head a shake.

“It was crushing,” he said. “I blamed myself for a long time. My brother wasn’t like me; he was a great guy and everyone he met liked him right away. I was more the menacing type; I needed to look tough and be tough because of the illegal drugs I was involved with, but Fabe didn’t do drugs or get into trouble with the law. We were complete opposites but in reality I really wanted to be more like him.”

That incident, “and the fact that my mother had long ago straightened her life out, gained a university education, had a good steady job and urged me and my siblings to better our stead in life,” was the beginning of the long journey from darkness to light.

“I slowed my drinking and tried to change, but it wasn’t an easy process,” assured Thomas. “I got thrown out of school for carrying a switchblade knife and no school would even consider me after that.”

No one, that is, until he applied at Amiskwaciy Academy.

“They accepted me and to this day I am very grateful for that,” he said. “It was a challenge in the beginning but as I began to learn I began to realize that I could do some good; I could succeed at something that wouldn’t put me in a courtroom or behind prison walls.”

After graduating from Amiskwaciy, Thmas enrolled in the Faculty of Art and Design at the University of Alberta.

“It was okay for awhile, but a classroom environment and I just don’t get along all that well,” he explained. “I still wanted to be creative and I’ve always been a pretty smart guy and so I put myself to work and taught myself how to use a computer and the design programs within. I learned how to use Pagemaker, Quark, photoshop – you name it and I wanted to learn about it.” 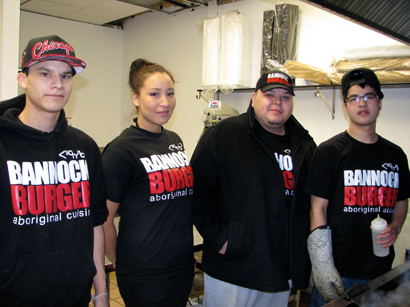 Four years ago he and a partner launched Distrikt Media, and today, with offices in Edmonton and Calgary the business offers a full array of print and design services. “We create flyers, business cards, posters in every size and format, and much much more,” he assured. “We are an all in one solutions company ready to serve the every day demands of print and design. Our pricing is very competitive; we have an efficient staff who possess a work ethic that supersedes the competition and enables us the ability to compete with anyone.”

“When I was a youngster, I never had much; as I grew older I wanted the things that others had. I turned to a life crime to get those things but I was never happy, never felt fulfilled. I felt I was destined for greater things and I guess I tried to attain that the easy way; it took some time for me to realize that anything worthwhile has to be earned, and I’m grateful that I had a second opportunity to get it right.”

Thomas said that over time he plans to open a second and maybe a third Bannock Burger location  in the Capital Region. If it’s successful he said, “maybe can open them in other cities and other provinces.”

With Jules, it seems like anything is possible because with determination, fortitude and a desire to succeed, he has already moved from the bottom of the deck to helm of the ship.

Whether you’re feeling like a scrumptious Bannock Burger complete with cheese fries and a cold or hot drink, or in need of some beautifully created posters, cards or flyers, you’ll be delighted with the products, the atmosphere and the friendly service you’ll receive when you contact Distrikt Media for your print needs and/or visit Jules and his staff for a delicious meal at Bannock Burger, located at 10704- 124 Street, Edmonton.