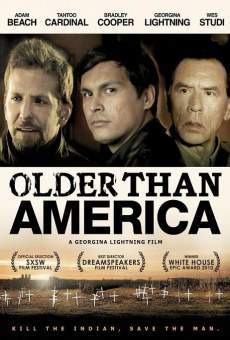 On March 17, 2014, just ten days before the Truth and Reconciliation Commission (TRC) held its Final Event at the Shaw Conference Centre, the City of Edmonton and the Art Gallery of Alberta, in partnership with Canadian Aboriginal filmmaker, Georgina Lightning and Tribal Alliance Productions, presented a public screening of the award-winning film, Older Than America. The 102 minute presentation, first released in 2008, played to a full house of appreciative onlookers, many of them learning for the first time about the horrifying role played by the now-defunct Indian Residential School system, and the long-standing affects it has had on the children and families within Canada’s Indigenous communities. 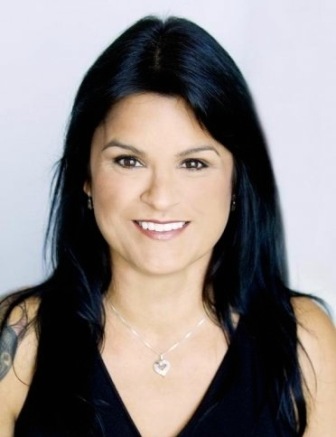 The film, a somewhat eerie project with supernatural overtones, offers an uncanny look into the past via the ghost-like visions of Rain, a woman haunted by the irrational and extraordinary efforts of a Catholic priest who went out of his way to ensure that Rain’s mother could never tell others about the atrocities that took place in the Indian Residential School she was forced into as a child. The story that unravels in Older Than America is much more than an eye-opener and a glimpse into 150 years of residential schools, it is an important saga of Canada’s sullied past and one that should bring about an unquenchable thirst for knowledge by all Canadians seeking to know more about the country’s Indigenous populations and why they continue to suffer today. “This wasn’t just an event for Aboriginal people,” noted Lightning in an interview following the presentation. “All Canadians have to deal with the legacy of the Indian Residential Schools, and I am personally quite pleased to see that so many non-Aboriginal people came here this evening to get a glimpse of this sad reality. I hope that this event will inspire people of all cultures and from all walks of life to support and encourage social and political participation at the TRC’s Final National Event taking place in Edmonton next week.” Those hopes were realized; more than 18,000 people from across Alberta and beyond attended the TRC’S seventh and Final National Event, which took place at the Shaw Conference Centre from March 27-30. Lightning’s 15 year career as a successful and hard-working filmmaker, actor, producer and director has enabled her to do what no history book has yet managed to accomplish – and that’s to tell the truth about the residential school era and the consequences it has unleashed not just in Canada, but on Indigenous peoples across the world. “I made this movie for a reason,” explained Lightning, whose father, tormented by the experiences he encountered in residential school, committed suicide when Georgina was 18 years old. “I made this movie to encourage others and to promote discussion about the truths of the past, about what really happened in those schools, about the effects that still linger today. I would like to see society soften the harsh judgments that exist today, particularly when it comes to social issues such as broken families and addictions – these are the lingering results of the residential school era.” A panel discussion followed the film presentation and included filmmaker/director Georgina Lightning, TRC Commissioners Chief Willie Littlechild and Dr. Marie Wilson, and media, governance and education management professional Lewis Cardinal and Clinical Traumatologist and Psychologist Jacqui Linder (M.A. C.C.T.). “What you saw here tonight,” noted Littlechild, after thanking the sold-out crowd for their interest and participation, “is real; what we need to do now is to figure out a way that we can come together to heal.” “Reconciliation,” assured Linder, “will only happen when we all sit down together and talk to one another. There is a great deal of trauma to deal with, trauma that has affected everyone. This can be dealt with and it can be overcome, but first we need to work together to discover ways to heal our spiritual, mental and physical selves. The TRC hearings can only be effective if everyone, not just Aboriginal people, come to the hearings to listen and learn.” Older Than America, with stars that include Georgina Lightning, Adam Beach, Wes Studi, Bradley Cooper and Tantoo Cardinal, has garnered more than 20 awards since its 2008 release, including Best Director (Lightning) and Best Supporting Actor (Studi) at the American Indian Film Festival and Best Dramatic Feature at the 2008 Flyway Film Festival. In 2009 the film received the Aloha Accolade Award from the Honolulu International Film Festival. In 2007 Lightning was featured in Filmmaker Magazine as one of 25 New Faces of Independent Film, and in 2010 she was chosen as the recipient of the White House Project- Epic-Award for Emerging Artists. A long-time advocate for Native American and First Nations advancement in the film industry, Lightning founded the Native Media Network and co-founded, with executive producer Audrey Martinez, Trial Alliance Productions. Over the years Lightning has participated in the film industry as a producer, director, actor and acting coach on projects that include Backroads, Tecumseh, Dreamkeepers, Christmas in the Clouds, Johnny Greyeyes and many others. She’s also participated in television as a guest star on West Wing and Walker, Texas Ranger. Georgina Lightning currently lives in Edmonton; her ancestral home is on the Samson Cree Nation at Maskwacis, Alberta. Older Than America was inspired by actual events that have taken place in the actor/director’s life. The film is available for rent or purchase through Netflix, iTunes and amazon.com. For more information and a look at the movie trailer, check out the website at www.olderthanamerica.com