EDMONTON/CNW/ – The citizens of the Métis Nation of Alberta (MNA) went to the polls on September 2, 2014 to cast their votes in the 2014 General Election.  At 10:45 p.m., the unofficial results for all elected officers were posted to the MNA’s website. A total of 1533 votes were cast for provincial presidential candidates and 1484 for vice-presidential candidates.

Audrey Poitras was re-elected as provincial president for her seventh consecutive term. Poitras has led the MNA in this role for the past eighteen years. 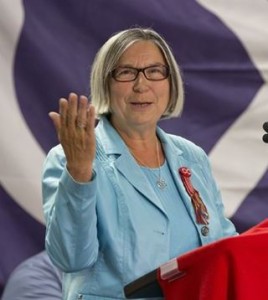 “The people have spoken, and I am honoured and humbled that citizens of the MNA remain confident in my ability to lead our Nation,” said President Poitras.

The current unofficial results for provincial president show Audrey Poitras with 1,068 votes, Donald McCargar with 236, and Melanie Omeniho with 229.

“I would like to thank all those who took the time to come out and vote.  I would also like to give a very big ‘thank you’ to all those who have supported me throughout the campaign and election process,” stated President Poitras.

President Poitras also went on to say “my renewed mandate is not about making changes but continuing on the path of moving the Nation forward.  A key priority over the next four years will be to continue making progress on key initiatives such as health, education and the rights of all of our citizens.”

“I am happy to have won and am looking forward to working with President Poitras for the next four years,” said Pimlott. He would also like to thank all of those who voted in this election.

The MNA operates as the government of the Métis people of Alberta with a province-wide “one person, one vote” ballot box election. In total, 55 polling stations were dispersed across the province.  The MNA election process adheres to the MNA Election Bylaws as well as Alberta’s Elections Act.

For more information and to view the full unofficial results of the 2014 General Election, please visit the Métis Nation of Alberta website at www.albertametis.com and click on ‘Current Result Totals.’