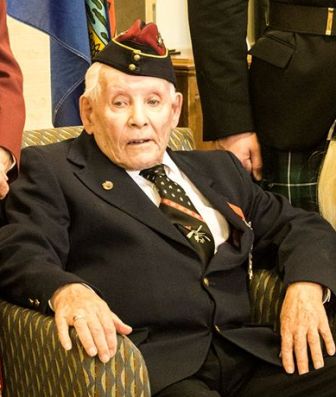 On Wednesday September 17, Aboriginal veteran Edmond Gagne was presented with France’s highest decoration, The Legion of Honour. Friends, family and fellow veterans gathered at the Kipnes Centre for Veterans to watch Gagne receive the appointment in recognition of his significant contribution to the liberation of France on D-Day in 1944.

As the distinct sound of bagpipes filled the room, Gagne emerged from the doorway and took his seat. He listened to a recount of his life in a short biography as he wiped tears from his eyes. 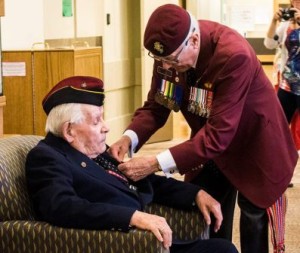 Second World War veteran Edmond Gagne, 93, is presented the French Legion of Honour medal by WWII veteran John MacDonald during a ceremony at the Kipnes Centre for Veterans on Sept. 17, 2014. Photo: Metis Nation of Alberta

After a live rendition of an Aboriginal honour song,  Mr. Gagne was presented with the Legion of Honour. Fellow veteran John McDonald pinned the medal to Gagne’s suit as everyone began to clap.

Edmond, 93, enlisted in the Edmonton Fusiliers in 1941 but was transferred to the Royal Winnipeg Rifles on D-Day, June 6 1944 where he participated in the storming of Juno Beach.