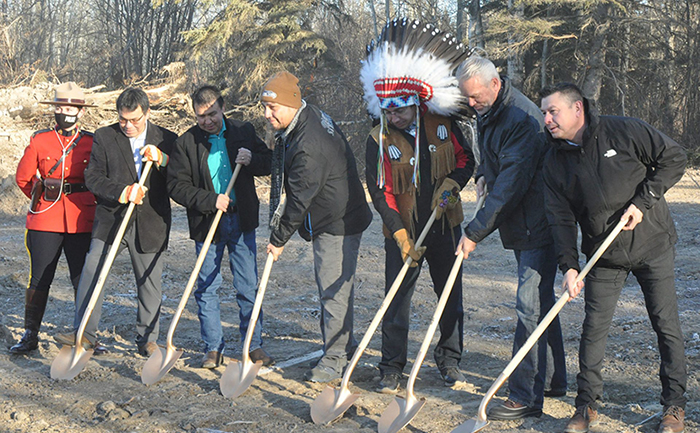 (ANNews) – The Whitefish Lake First Nation’s community, north of Lesser Slave Lake, has its headquarters in Atikameg. The Council of Atikameg has focused much of their intention toward healing, as of late. It is this focus that has allowed the residents to become more positively self-reliant; a focus that has radiated outward to neighbouring communities.

That healing has come, in part, from a vision that Atikameg’s Chief Albert Thunder shared at the beginning of his tenure. Now, nearing the end of his four years as Chief, he spoke to Alberta Native News about how proud and inspired he is by the people in his community, and how excited he is for his community’s future. With forward thinking projects like Atikameg’s future women’s shelter, his optimism has much justification.

Last month, the community had their sod turning for their new women’s shelter. “A lady named Karen McCarthy has been spearheading the women’s shelter,” explained Thunder. “There were only ten [applications] that were going to be built in all of Canada. First Nations had first dibs at it and we submitted the application and got it: $3.7 million for the project.”

Chief Thunder detailed the project is fully funded by Canadian Mortgage and Housing Corporation, (CMHC). The operational funding agreement of $800,000 a year is coming from Indigenous Services Canada.

Atikameg is largely a Cree First Nations who, like most communities across the country, find the need for family support outweighs actual support and resources. With a sobering tone, Chief Thunder talked about the root cause of that need. “Right now, every First Nation – all 634 First Nations across Canada has a major housing crisis. That overcrowding is probably the biggest driver of poverty and domestic violence [as well as] substance abuse. I told one of my managers, if we don’t take care of our people, even with the simple stuff of grading the roads, our people will feel like they are abandoned.”

Chief Thunder detailed the current challenges, gradually shifting his tone to one of excitement. “This is a big win for our community, having this women’s shelter. And it’s not just for our community, it is also for the surrounding area. In the Whitefish area we don’t have a predominant crisis of domestic or gender-based violence but we have it within the surrounding areas.”

Like many isolated communities, resources can be scarce. “There are days when we get a call from [neighbouring communities] asking about women’s shelters,” continued the Chief. “There’s one in Sucker Creek, 45 minutes south of us, so we would be sending our members there. We belong to a tribal council that consists of five Nations and [with that many communities] our Nations need some kind of facility such as this.”

As Thunder explained, there are also economic benefits to creating this kind of social infrastructure. “If it is at Atikameg, it will be staffed by Indigenous people. It’s not just the win of having a women’s shelter, it’s the opportunities for long term jobs now. It’s not just the healing process for domestic violence and protecting the children but (it will provide opportunities to] train parents on how to be parents. The generational impacts of residential schools; we’re still feeling the ripple effects. Now, with the opportunities of full-time jobs, that gives our First Nations members purpose, [which is also] part of the healing.”

When Chief Albert Thunder started his term, he knew healing was key to building up his community. “When I started here 3.8 years ago we were always aiming for healing. We have our own Child and Family Services (CFS) now, and we took it on. It is a one-hundred percent Whitefish run CFS and our director and CFS workers are from here. So, we not only are taking care of our own, but we are bringing in full time job opportunities to give people purpose.”

The Chief expects the Women’s Shelter to be finished by April as a community hall with similar square footage and structure was built within that time frame. The facility will have six units and be able to house at least 20 people.

All the partners attended the sod turning ceremony last month: Chief and council, Seko Construction, the RCMP and members of the Whitefish Community.

Chief Thunder praised the Council and their working relationship. “We really work hard together on the reserve. We are moving and thinking forward and innovative. We have our headlights in the front, not in the back,” he laughed. He also enthused about community members in attendance and the feedback he and the Council received. “A lot [of our community women] were there and shared they were so inspired about how our nation is coming together. It’s amazing what’s happening here in Whitefish, that’s for sure.”

Investing in community not only builds vibrant communities but inspires the next generation to take care of themselves and their own. “This is my first time as Chief but right from the beginning I recognized that this community needed healing, all of us – I needed healing. The hurt that was happening [was from] the generational impact of residential schools. We needed to be a neighbourhood community instead of a crab syndrome.”

Having never heard of crab syndrome, Chief Thunder explained, “When you catch a pail of crabs the one crab might be climbing out of the pail, then another crab grabs him and pulls him down to the bottom.”

Chief Thunder talked of how focusing on healing has made his community more positive. “Instead of knocking our neighbour down and gossiping, we pray for them, like sowing seeds. It’s like [the movie] Field of Dreams, we build it and they will come, and the money will come. You do right for your people, good things will happen for the community.”

Be the first to comment on "Atikameg moves forward on the healing journey: A conversation with Chief Albert Thunder"