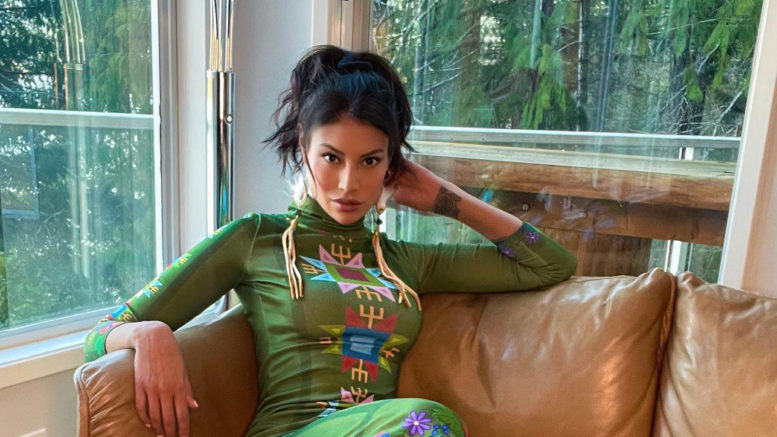 (ANNews) – Ashley Callingbull-Rabbit is emerging from the pandemic healthier and fit! Never one to just take a break, at the onset of the COVID-19 pandemic Ashley found herself at a loss at what to do.

Two years later, she is married to hockey coach Wacey Rabbit, a former Saskatoon Blades captain who is now returning to the Blades organization as Assistant Coach. Ashley is also joining the Blades as well as the Saskatchewan Rush as a brand ambassador. The couple will also be engaged in Indigenous community outreach.

In the Spring of 2020, the former Mrs. Universe decided to focus on her fitness – a journey that led to landing a coveted photo shoot in Sports Illustrated Magazine and to being named the in-game host for the Edmonton Elks Football team with CISN Country’s Chris Scheetz.

The most powerful thing is that she did it by herself and at home, proving that much can be accomplished with willpower, space, allocated time, and commitment.

A Cree woman as an in-game host is a monumental moment for all Cree women and a first for Canadian Football.

“Being a proud member of Treaty Six, I’ve always been a fan of Edmonton’s sports teams,” said Ashley. “I’m excited to join one of my hometown teams with the Edmonton Elks.”

“Having Ashley be a game-day voice of the Elks is not only a source of pride for Enoch, but all Treaty Six First Nations,” Enoch Cree Nation Chief Billy Morin said.

Her fitness journey started in 2020, at the beginning of the pandemic.

“I thought I needed to make a change,” she said. “My lifestyle is busy – like constantly flying, traveling, and working. But when the pandemic started and it was time to go into quarantine, I just felt lost.”

I felt sad, she added.

“I was sitting there on the couch eating cheeses. I wasn’t feeling as ambitious as before because everything was just so uncertain, so I thought, I’m not feeling good mentally right now.”

She said she decided to start with small workouts and gradually build up her workout routine.

Her first thought was, “Maybe I should just start moving – movement is medicine.”

“So, I just started doing little things like stretching, walking my dogs. And then I started doing actual workouts in the basement; everything I’ve done for the last two years has been at-home workouts.”

“It felt good to sweat, but it also took my mind off everything,” said Ashley.

She considered every little workout as a win for her fitness journey and every day she would ask herself, “What else can I accomplish today?”

The workouts started just by moving, and they have gradually progressed. “And now I’ve been doing it for almost two years. I’m in the best shape of my life. I feel amazing,” said Ashley.

“It feels good to take care of myself physically because it helps mentally, and I feel stronger all around.”

Her physical and mental fitness have paid off. In May, the former Mrs. Universe became the first-ever Indigenous woman to grace the pages of Sports Illustrated magazine’s Swimsuit Edition.

It was an incredible opportunity, said Ashley, because thousands of women applied for it.

She had put a video together for Sports Illustrated that showcased who she was and what she stood for. She received a message that she made it to the casting round with 50 other models – all from different backgrounds, with different stories and accomplishments.

“And then, I remember it was almost 6 am on March 1 and no one calls me at 6 am unless it’s an emergency,” said Ashley.

“I answered the phone, and I was half-awake, and they said: We’re calling from Sports Illustrated, and we want to let you know that we’ve selected you. Are you free to fly to the Dominican Republic?

“I said yes and I was crying. I thought it wasn’t real,” recalled Ashley.

“I thought maybe I would wake up, like it was a dream. And then within days, I was in Dominican Republic shooting for Sports Illustrated, it just happened so fast.”

It was a wonderful experience and a real honour, she added. “I have always been pushing myself and always working toward my goals.”

One of her goals is to help vulnerable and exploited women. “One day, I hope to start a women’s shelter because my mom was escaping domestic violence,” said Ashley.

“It’s essential for me to give women a second chance at life, and especially help their kids,” she added. “I don’t want them to go through what I went through.”

Ashley wanted to end the interview to challenge others to add movement to their lives, for both their physical and mental wellness. “Movement is medicine!” she concluded.