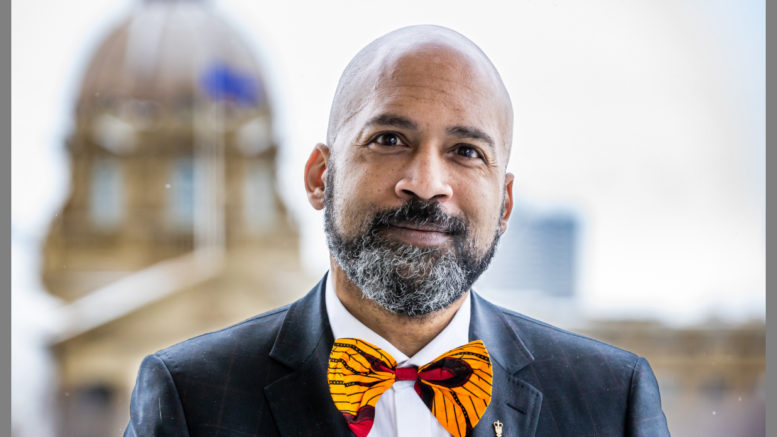 (ANNews) – David Shepherd, MLA for Edmonton City Centre, put forward BILL 204, which aims to shed light on racism and systemic racism in Alberta. On April 21, the Alberta Government denied BILL 204, the Anti-Racism Act. A rally is planned for later this week to raise awareness of this important issue.

BILL 204 is a non-partisan bill that would improve the lives of diverse populations and by denying it, the Alberta Government missed an opportunity to genuinely understand and tackle systemic racism in Alberta, says MLA Shepherd.

In an interview with Alberta Native News Reporter Chevi Rabbit, MLA Shepherd talked about the importance of race-based disaggregated data and why BILL 204 is vital to the wellbeing of First Nations, Blacks, Chinese and other marginalized communities.

“Bill 204 would require all government departments in Alberta to collect race-based data and report on critical measurements around equity. It also would create an anti-racism office and Commissioner to analyze data and look for ongoing inequities in policies, programs, and services.”

Shepherd has had the opportunity to speak with folks who work in Alberta’s Health Care System, and with Indigenous physicians, Indigenous academics and other fields from the Indigenous community.

“And they have told me that having access to this data empowers Indigenous communities,” said Shepherd.

He says that BILL 204 will help First Nation and Métis governments identify where problems exist and address the shortcomings of public institutions. “These fundamental issues exist,” added Shepherd.

“I recognize that the Indigenous community and Black communities have had similar concerns with regards to the justice system and impacts on their members.”

Shepherd was first elected with the NDP government in 2015. He was re-elected as a member of the NDP opposition in 2019 and was appointed as one of the official opposition critics.

Shepherd said that BILL 204 didn’t just come from NDP consultations; this was also part of the first set of recommendations from the UCP’s Alberta Anti Racism Advisory Council.

“So, when they put their recommendations forward last year to the Minister of Culture, one of the key recommendations was the collection of race-based disaggregated data,” he said.

Systematic racism is widely acknowledged. “That’s not even a question on the Alberta legislature; the Premier of Alberta has acknowledged this. As well, the current Minister of Immigration of labor and immigration has spoken of his experiences as a Black man in Alberta and acknowledged the existence of systemic racism,” said Shepherd.

“When you apply for a driver’s license, when you go in for health care, you’re already filling out forms, putting in your information, your name, your gender, your age, all of these different things. And so, it’s simply adding one more piece in there and asking people to state how they identify in terms of their race or ethnicity.”

Shepherd gives a little history of what led to the creation of BILL 204.

In the wake of the George Floyd murder in the United States, MLA David Shepherd started working with the NDP caucus to consult with racialized communities, including Indigenous communities.

“Particularly in areas of policy that are controlled or under the governance of the provincial government,” said Shepherd.

“One thing that came forward consistently, throughout that work was the need to collect race-based disaggregated data because folks talked about challenges they faced in the healthcare system, a prejudice or bias, or, you know, pointing to the fact that certain communities had poorer outcomes in health than others simply based on race.”

He noted the diverse people’s challenges in the education system, post-secondary, seeking employment, and even things as simple as trying to get a loan to start a business. “The thing that came through consistently is that to address those issues, we had to first have the data collected to identify where those issues exist. Then we can determine how we can best address them,” said Shepherd.

He says that BILL 204 itself is not super descriptive; it gives a lot of room for the government to define how this process will work.

“We tried to be very thoughtful about putting this together,” said Shepherd.

He ended the interview by saying that BILL 204 is an essential opportunity for solidarity, that would benefit all communities, Black, Indigenous, and all people of color in the province of Alberta.

“By collecting this data, we can empower all communities to get better outcomes.”