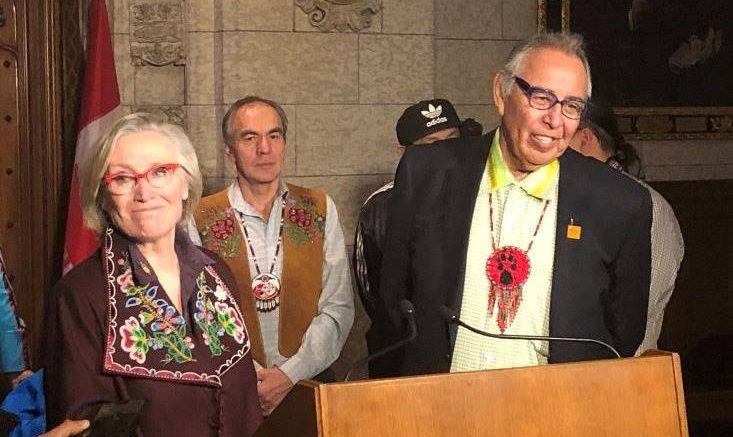 An Agreement-in-Principle has been reached with the Federal government to resolve Indian Day Schools litigation.

December 6, 2018 – On December 6, 2018, Carolyn Bennett, Minister of Crown-Indigenous Relations, along with Garry McLean, Claudette Commanda, Mariette Buckshot and Roger Augustine, announced that an Agreement-in-Principle has been reached in the Indian Day Schools (McLean) class action.

The signing of the Agreement-in-Principle marks an important milestone for thousands of Indigenous people who suffered cultural harm and physical and sexual abuse while attending federally operated Indian Day Schools.

The Agreement-in-Principle combines individual compensation for harms associated with attendance at an Indian Day School with a forward-looking investment to support healing, wellness, education, language, culture and commemoration for class members and their communities.

Over the past several months, the Government of Canada and counsel for the plaintiffs have been engaged in negotiations to resolve this litigation in a fair, compassionate, and respectful manner that promotes reconciliation and healing.

“The mistreatment of Indigenous children is a shameful part of Canada’s history,” noted Minister of Crown-Indigenous Relations Carolyn Bennett. “This Agreement-in-Principle brings us one step closer to bringing lasting and meaningful resolution and healing to the legacy of Indian Day Schools. Canada is committed to reconciliation and laying the foundation for multi-generational healing and will continue to work with survivors toward righting historical wrongs.”

Canada will continue to work with survivors and Indigenous partners to advance reconciliation, promote Indigenous languages and culture, and support the healing and commemoration of those affected by the harmful policies of the past.

“Ever since 2006, when the Indian Residential Schools claim was settled, we have been struggling for recognition of the harms suffered by Indian Day School students, who were not part of the settlement,” stated lead plaintiff Garry McLean. “We are relieved that we have reached this milestone. This settlement will benefit all students who attended these federally operated day schools and their families and communities.”