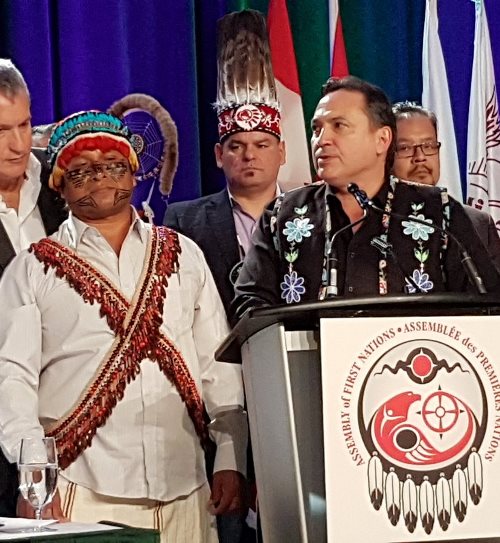 OTTAWA, Dec. 6, 2017 /CNW/ – In a setback to Chevron Corporation’s campaign to evade a $9.5 billion liability owed to rainforest communities, the Assembly of First Nations (AFN) and Ecuador signed a protocol today to hold the corporation accountable for dumping billions of gallons of toxic oil waste and for ongoing violations of Indigenous rights.

The agreement was signed at the AFN Special Chiefs Assembly in Ottawa by AFN National Chief Perry Bellegarde, Jamie Vargas, the National Chief of Ecuador and the President of that country’s Indigenous federation, known as CONAIE, and Carmen Cartuche, the President of the Front for the Defense of the Amazon (FDA), the community-based organization in Ecuador’s Amazon region that brought a historic lawsuit against Chevron on behalf of Indigenous and farmer communities. The agreement is supported by a resolution passed unanimously by Chiefs-in-Assembly today.

“This protocol is a profound step forward for Indigenous groups in both Ecuador and Canada to hold an irresponsible corporate polluter accountable for its actions in destroying Indigenous lands and cultures in the Amazon and around the world,” said Vargas, who is currently leading a national march of Indigenous groups in Ecuador to pressure the national government to respect First Nations territorial rights.

The protocol between the two national federations is potentially a major blow to Chevron’s efforts to evade the environmental liability, imposed by three layers of courts in Ecuador in 2013 after the company was found to be responsible for deliberately dumping billions of gallons of toxic oil waste onto Indigenous ancestral lands as a cost-saving measure. Cancer rates in the area have skyrocketed and the cultures of five Indigenous groups – Cofan, Secoya, Huaorani, Kichwa, and Siona – have been decimated, according to evidence before the Ecuador court.

Although Chevron had insisted the trial take place in Ecuador and had accepted jurisdiction there, the company later refused to pay the environmental judgment. The case is now in Canadian courts, where the affected communities have won three consecutive appellate decisions in their effort to seize Chevron assets to force the company to comply with the rule of law and pay the Ecuador judgment.

President Cartuche of the FDA, which has led the lawsuit against Chevron since it was filed in 1993, said, “We want to thank our Canadian brothers and sisters for standing with our communities in their historic struggle to hold Chevron accountable. We look forward to developing joint programs to ensure that Chevron pays a very heavy price for its crimes in Ecuador and for any violations of human rights no matter where they occur.”

The protocol grew out of an invitation issued by Ecuadorian Indigenous groups to their Canadian counterparts to visit the affected area in Ecuador, where Chevron abandoned roughly 1,000 unlined oil waste pits after operating in the country from 1964 to 1992. The protocol is an agreement by all parties to ensure Chevron respects Indigenous rights and territories in all its activities. Chevron has tried to obtain impunity in Canada by claiming its assets cannot be seized because they are held by a subsidiary even though it is wholly-owned by the company. That particular issue is scheduled for argument in April before the Ontario Court of Appeal.

In all, 21 appellate judges in Ecuador and Canada have rejected Chevron’s arguments and ruled in favor of various aspects of the claims of the Ecuadorian Indigenous groups. Not a single appellate judge in either of the two countries has sided with Chevron.