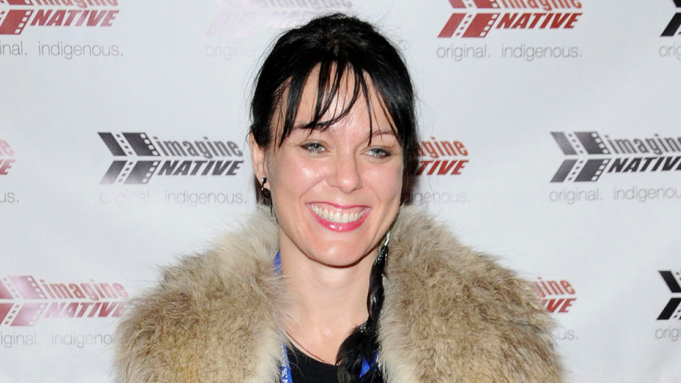 Michelle Latimer is one example of a public figure whose claim of Indigenous ancestry has been called into question. Photo Credit: Dominic Chan/WENN.com Newscom/(Mega Agency TagID: wennphotosthree050921.jpg) [Photo via Mega Agency]

(ANNews) – Acclaimed filmmaker Michelle Latimer, a prominent figure in Indigenous filmmaking, has come under fire this month after her Indigenous heritage was called into question.

Latimer is the director of a documentary called Inconvenient Indian (2020) and the hit TV series Trickster (2020).

The question of Latimer’s heritage came after the National Film Board of Canada (NFB) described Latimer as having an “Algonquin, Métis and French heritage, from Kitigan Zibi Anishinabeg (Maniwaki), Quebec,” in a press release for the Toronto International Film Festival (TIFF).

This caused Kitigan Zibi members to question the statement in order to understand her connection to their Nation.

At the end of it all, it was determined that the claims were false.

Over the last decade, Latimer has amassed a large number of awards, grants and fellowships recognizing her work at raising awareness of Indigenous rights and sovereignty.

This year, she won awards from the Toronto International Film Festival and a grant from Fork Films for a documentary on Mi’kmaw activist Annie Mae Aquash who was murdered while a member of the American Indian Movement.

“I sincerely apologize for naming the community of Kitigan Zibi publicly before I had done all of the necessary work to understand the connection,” said Latimer, whose claims to Indigeneity were based on oral history taught to her by her Grandfather. “My grandfather loved these lands and knew them like the back of his hand and his stories became an important part of our oral history.”

Elder Claudette Commanda, one of the most prominent Elders in Canada (who also happens to be from Kitigan Zibi), said that the statements made by Latimer, without more evidence, were an “insult.”

“Why are you claiming you are from Kitigan Zibi? What is your purpose and intent? What do you have to gain from this?” Commanda said. “Who are you? And prove to me who you are.”

Commanda said Kitigan Zibi has seen a recent increase in unfounded ancestry claims to the community and that such acts threaten the identity of her people who have survived in the face of immense hardship.

“Why is it that they just want the fame and glory, but they don’t want the struggles that come with it?” said Commanda.

Then on December 21, Latimer announced that she would be resigning from the Trickster TV series, along with two other producers of the show.

“It’s with a heavy heart that I am resigning from Season 2 of Trickster,” Latimer wrote in the Facebook post.

“When I first read the novels that inspired Trickster, I was struck by the powerful tale of a family coming together to overcome adversity. I envisioned this story as a television series that would celebrate Indigenous talent and amplify Indigenous voices.

“I have listened to my community and feel that stepping away from the production is the appropriate course of action.”

After engaging with the Indigenous participants who appear on screen, the NFB’s Indigenous Advisory Group, and industry partners, the NFB, 90th Parallel Productions and producer Jesse Wente have decided to withdraw Inconvenient Indian from active distribution.

The film will be withdrawn from all upcoming festivals, including the 2021 Sundance Film Festival.

“Over the coming weeks and months, we will continue to dialogue and engage with Indigenous communities to explore an accountable path forward for the film,” stated the NFB.

“The NFB is committed to the On-Screen Protocols & Pathways developed by imagineNATIVE and the guidelines of the Indigenous Screen Office, and remains dedicated to the principle that Indigenous stories must be told by Indigenous creators.”