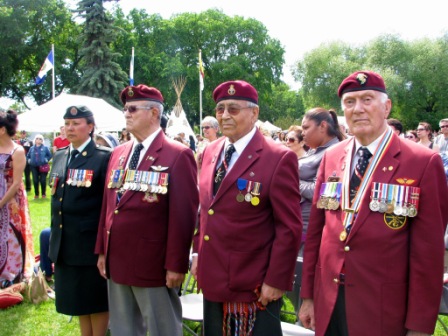 The Aboriginal Veterans Society of Alberta (AVSA) needs an influx of new members. This year again, they had difficulty making a quorum at their recent Annual General Meeting (AGM). Unfortunately this was not an unusual occurrence as the poor showing happened last year too.

Although their ranks have been thinning out, the AVSA has been proceeding with activities, including the AGMs. This year’s AGM, on May 31 at Edmonton’s Chateau Louis Conference Centre, marked the 31st anniversary of the Society. 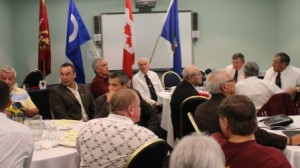 Aboriginal veterans meet at their AGM at the Chateau Louis Centre in Edmonton. Article and photos by Terry Lusty

Founded in September of 1983, the organization now has 78 members each of whom served in one of the forces. However, admits President John MacDonald, a number of those members are not very active. As was the case in 2013, the organization was unable to make quorum. Still, it proceeded with business as usual in the way of reports and financial statements so that the membership would know what’s been transpiring and how they sit financially.

The current executive of the society is well aware that fresh blood will best come from our more recent servicemen who have been seeing action in places like Afghanistan. In fact, three new members to AVSA were inducted during the AGM. They included: Shane Marchant, 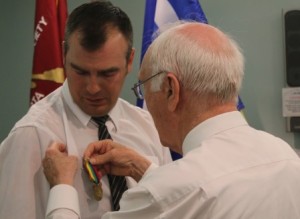 Brenda Woods and Colin Bonneau. Marchant is an Afghanistan veteran, one of 12 who were wounded in action in 2010. Four others in that particular encounter lost their lives. The three new members were presented with AVSA medals. Marchant was also recipient of a Canadian Millennium Medal.

The society is presently in its second year of a five-year funding agreement ($53,000) for its Bold Eagle recruit/basic training program. Last September it graduated 25 members. For excellence in the program, Richard Comstock of Calgary received a $500 education bursary from ATCO. Also supporting Bold Eagle was OPUS which donated $2,000 dollars for Aboriginal youth who excelled in the program. In addition to Bold Eagle, two other programs are in operation – Black Bear and Raven. The average age of the soldiers is 17.7 years, with about 600 applicants in this past year. 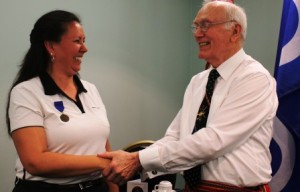 Veteran Brenda Woods cracks a smile after being formally inducted as a new AVSA member.

Speaking of recruiting, program forms and information sheets are being distributed to all First Nations reserves and the eight Métis Settlements in Alberta. In addition, the AVSA will be on hand at this year’s August 8-10 Metis Nation of Alberta annual general meeting in Stettler, Alberta.

There’s also been an interesting development over in France. It seems the French Government is requesting that Canadian veterans who served in the Canadian forces in the June 6 to August 31, 1944, Battle of Normandy have their names forwarded for potential induction to the Legion of Honour, which, of course, is the country’s highest honour awarded by the French Government. At the time that AVSA became aware of this possibility, three Alberta Aboriginals qualified for consideration. They were Edmond Gagne, Leo Goulet and Charlie St. Germain.

Unfortunately, Mr. Goulet passed away on April 21 of this year, leaving only the other two as possible candidates. St. Germain is very excited about the thought but Gagne is in special care and likely will not be able to make the trip. The honour is meant, in part, to acknowledge and “honour those who lost their lives while in Canadian service and to preserve the memory of their sacrifices and accomplishments,” reported MacDonald. 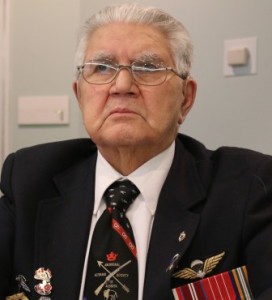 In a separate area of interest, veteran Smokey Tomkins who resides in Ft. McMurray, Alberta, and happened to be attending the AVSA meeting has been informing people of a matter that many are unaware of – the existence of “Cree code talkers.”  According to Tomkins, their role was similar to the much-publicized Navajo code talkers who were porrayed in a 2002 movie entitled Windtalkers which stars Nicholas Cage and Adam Beach. Beach’s role was loosely based on the real-life code talker Chester Nez who passed away last month at the age of 93. He was the last living member of the original Navajo code talkers who served in World War II. In all, there were 29 Navajo men recruited by the Marines to develop a crack-proof cipher for transmitting vital messages across the Pacific.

“Apparently many Canadians are not familiar with the existence of Canada’s Cree code talkers during WW II,” explains Tomkins. “One of my brothers,” he adds, “was one of those code talkers, and I really think that’s a story that needs to get out there.”

All three of the AVSA executive board members were returned to office by acclamation. They are: President John MacDonald, Vice-president Jack White and Secretary/Treasurer Don Langford.