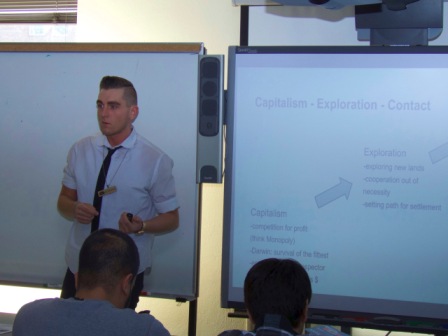 Centre High Campus (CHC) caters to adult students from all walks of life in Edmonton – Aboriginal, non-Aboriginal and those new to Canada. Most of the students have no previous education about Indigenous peoples and know very little about them. But that trend is changing, thanks to an intelligent and curious collective of students who have enrolled in the downtown campus’s Aboriginal Studies Program.

“We are now offering the Aboriginal Studies program four times a day with about 200 students enrolled in our program,” explained Centre High FNMI Liaison Naim Cardinal. “The program has been very well received by the students and interest continues to grow throughout the community. We are now in our fourth year of offering Aboriginal Studies 30 at Centre High Campus and I am very humbled to see the success we have had at our school.” 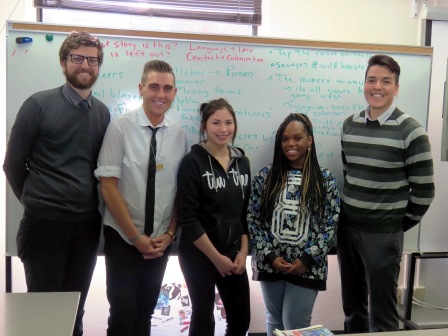 A couple of years ago CHC had one Aboriginal Studies class and about 35 students enrolled in the program.  In February 2014 Cardinal and colleague Adam Ambrozy told CBC that the program had grown to more than 70 students.

At the time, Cardinal said, “Not enough people are getting this type of education in the school system, and it’s creating a misunderstanding of Aboriginal people in our country.”  He said he was both “pleased and honoured” to see the growth in the program and the interest it was getting from non-Aboriginal students.

Ambrozy spoke about the “participation in sharing circles and different cultural events,” as being key elements to the success of the program.

It’s now just a year later and that enrolment has jumped to about 200. Between 85 and 90 percent of the students in the Aboriginal Studies Program are non-Aboriginal, a figure that matches the student population. Nearly 3,000 students attend CHC and about ten percent (300) of them are Aboriginal. The growth of the program has much to do with the fact that non-Aboriginal Canadians, particularly those who are new to Canada, want to know more.

“They’ve come to the right place,” assured Adam Ambrozy, as we entered a classroom being taught by one of Centre High’s newest Aboriginal Studies teachers, Matt Whitman, who began his first year as a teacher in September after having graduated from the University of Alberta. British-born and Canadian-raised, Whitman also earned his Masters Degree at the  London School of Economics in London, England. 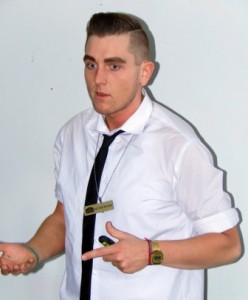 He’d just finished teaching a class about a film on the growth of North America in the millennia following the last ice-age. Americanized and full of what we today consider as vulgarity, innuendo and discriminatory narrative, Whitman eased through the film, several minutes at a time, pausing often to ask questions, get feedback and discuss what the narrative was really saying – or not saying. The classroom feedback was affable and ongoing, the students seldom missed the point.

What’s it like to teach the Aboriginal Studies Program?

“It’s a new experience for me and it’s a new experience for most of the students in the class,” replied Whitman, after the session had ended. “I really enjoy teaching this class and having the opportunity to help dispel the myths, end the stereotyping and present the facts about the history that Aboriginal peoples have with this great land we call Canada.”

About half of his students were not born in Canada, and many have preconceived notions about the country and the Aboriginal peoples who once dominated it. Much of that knowledge is derived from the stereotyping delivered in everything from barroom conversations to Hollywood films to controversial text books.

“It’s important to ensure that both sides of every story are told, otherwise the truth cannot prevail and history must always be about truth,” he said. “I want every student to understand the history of Canada and all of its people in as wide a breadth and from as many perspectives as possible. I want them to understand that history is about questioning things; Canada has some remarkable traits and has done a great deal of good things, but in some areas they haven’t done as well. If you want to be a Canadian you need to know its history; you need to know the good and the bad.”

Former Archbishop Romero and Xavier High School student, 19 year old Amanda Phillips, is upgrading her Grade 12 biology, math and chemistry marks and plans to attend NAIT next year; she has aspirations of becoming an X-ray Technician. She joined CHC in September and chose Aboriginal Studies over Social Studies because “I wanted to learn more about my culture, my people and our relationship with Canada. As a Métis person I was raised by my mom and never really had the opportunity to get to know my dad’s side of the family. As I’ve grown to adulthood I’ve become more interested in my Native heritage and this course is really helping me to understand my Aboriginal roots.

“I just recently learned about the Papaschase Nation and the people that were pushed out of Edmonton and never received compensation; it’s a sad part of our history but it’s one that I want to know more about. I’m part of the Dakota First Nation in Manitoba; that’s where my dad is from, and though I don’t really know any of my relatives because I haven’t met them, one day I would really like to.”

Phillips said she finds the Aboriginal Studies Program at CHC to be “educational, enlightening and very interesting,” and credits the teaching staff for their ongoing dialogue and willingness to answer any and all questions that come their way.

“This is a very good school where the teachers go out of their way to make sure you understand everything you need to know to get the most out of the program.”

Eighteen year old Tania Ymbi has also been attending CHC since September. A former high school student at St. Joseph’s, Ymbi attended school in three different provinces before coming to Alberta. Born in Montreal, Tania’s background is Nigerian and Haitian. She loves the Aboriginal Studies Program, and she’s no stranger to it.

“I also took Aboriginal Studies 10 and 20 in Grades 11 and 12; it is a much more interesting course than Social Studies and it seems to be a bit more realistic in terms of the experiences faced by Aboriginal citizens in Canada. In those earlier Aboriginal Studies programs everything was delivered in a book; the program here is so very different and there’s a lot of extra help when you need it and the interaction is ongoing and very educational. There are also field trips and other outings coming up and that’s something I haven’t been on before so I’m looking forward to that aspect of learning.” 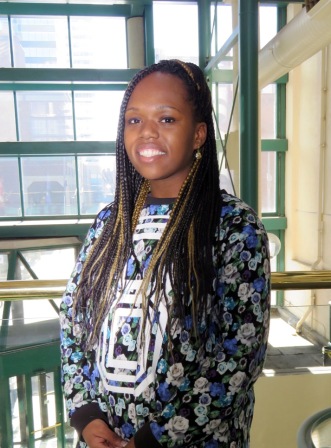 Student Tania Ymbi has been accepted at Concordia University.

“Yes, even though I’ve taken the earlier programs there is so much to learn, so much to know. I love this subject because it gives you the opportunity to learn about another culture and that is something that will probably be valuable as I prepare to enter Concordia College to pursue my Bachelor of Arts in Philosophy and Political Science.”

Since entering the program at CHC Ymbi says her knowledge has grown and her understanding of Aboriginal peoples has expanded.

“Interaction and communication are key to continued growth and the atmosphere here is conducive to good learning. I have come to have a real appreciation for the Indigenous peoples of Canada and I owe most of it to this program and the teachers who deliver it.”

Earlier this month Dr. Dwayne Donald visited Centre High as a guest lecturer. He spoke about mapping from an Aboriginal perspective and included an activity for the students to complete. A descendent of the amiskwaciwiyiniwak and the Papaschase Cree, Dr. Donald is an associate professor in the Faculty of Education at the University of Alberta. His work focuses on ways in which Indigenous philosophies can expand and enhance our understandings of curriculum and pedagogy.

“My overall message,” he noted following his delivery, “was to think carefully about the connections between land and place and story and how we map those. Schools usually provide their students with colonial versions of maps and mapping that celebrate the story of Canada as a nation and Canadian as a nationality. The problem with this celebration is that it typically excludes Indigenous understandings of land, place, and story. So the session was about helping people understand the many different kinds of maps that can be created if we honour Indigenous philosophies and not just repeatedly replicate colonial mapping practices. To honour Indigenous understandings of land and place and story is to imagine other ways for us to live in relation to the things that give us life – water, air, land, and what feeds us.

“At its best, and as it is being done at Centre High, Aboriginal Studies is about engaging students in this kind of imagination and simultaneously repairing and renewing Aboriginal-Canadian relations on more ethical terms.”

Aboriginal Studies 30 is a provincial course for all Alberta students and is designed to give students a greater understanding of the current issues facing Aboriginal peoples in Canada and worldwide. Aboriginal Studies 30 enables students to gain  an understanding of the issues of Aboriginal rights and self-government, Aboriginal land claims, Aboriginal peoples in Canadian society and Aboriginal world issues. The course is innovative and engaging and allows students to learn about Aboriginal issues and history from an Indigenous perspective.  Students also have the opportunity to engage in a variety of cultural experiences. Elders and guest speakers share Indigenous knowledge and students attend cultural events at locations throughout the city.

“I remember once sitting down to meet with other teachers and administrators to get the course going and wondering how it would work,” smiled Cardinal. “Now, we offer four sections and see students from all walks of life participate in and successfully complete this course. I feel very fortunate to have been a part of this course from the beginning and to see where it has gone to now. However, in saying that, I believe that we would not be where we are without the amazing staff at our school. We are very lucky to have great leadership within the administration at our school and staff members willing to support and promote our Aboriginal Studies class. It has been great to work with teachers like Adam and Matt who put their hearts into their work. I look forward to the future and the changes we may see in our world as a result of courses like this being offered at our school and others as well. “

Centre High Campus is located in downtown Edmonton’s Boardwalk district. The educational facility is open all year round, offering its adult students a flexible schedule that allows them to gain their education on both a part time and full time basis and even provides some evening and Saturday classes. The post secondary preparation programs include upgrading high school marks, meeting post secondary entrance requirements, advanced credit courses at NAIT and career counselling. The school also offers specialized programs such as Physical Education, computer courses, reading programs and tutorials. Operating under the auspices of the Edmonton Public School Board, Centre High is one of several educational institutions in the Capital Region designed to help students engage themselves in completing their high school graduation ‘beyond the third year.’ The school also offers fourth and fifth year school programming that includes academic upgrading, post secondary partnerships and career preparation.