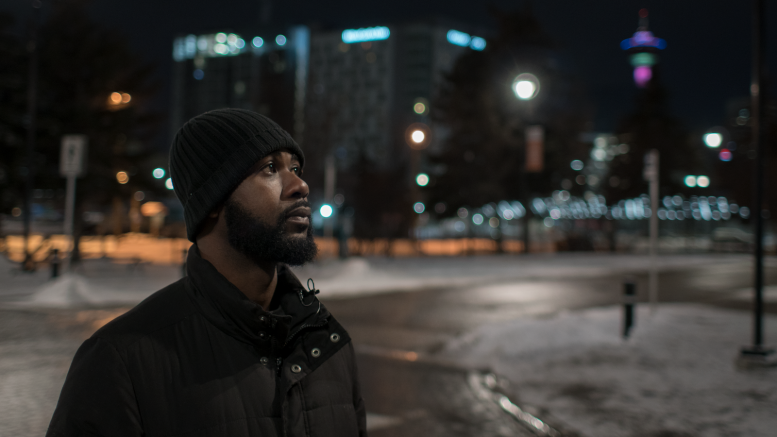 Five years in the making, the documentary "Above the Law" unravels the intertwined stories of three individuals who accuse the Calgary Police of excessive force. (Photo courtesy of Lost Time Media and Big Cedar Films) 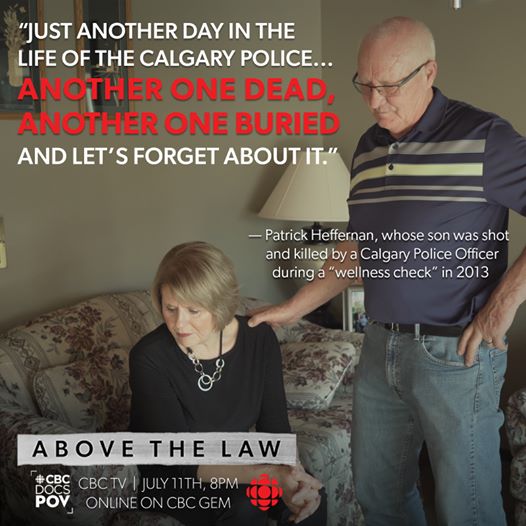 (ANNews) – Above the Law, a new documentary film by Marc Serpa Francoeur and Robinder Uppal about police brutality in Calgary, Alberta, premieres on CBC television at 8:00pm local time on July 11, 2020, and is available for streaming for free on CBC Gem. The production was led by Serpa Francoeur and Uppal’s Lost Time Media, a Toronto-based production company focusing on engaging social issue documentary film and interactive projects.

“Born and raised in Calgary, we’ve always maintained an interest in what’s going on in our hometown,” said Serpa Francoeur and Uppal on their choice to make a film about the Calgary Police Service. “We definitely asked ourselves whether it was the right setting for an investigation of police malfeasance (versus, say, a larger city like Toronto), but the deeper we got, the more obvious it became that the Calgary Police Service, and Alberta more broadly, were very much deserving of our attention, both due to the sheer quantity and severity of violent incidents and other scandals, as well as the apparent lack of meaningful consequences for what seemed to us entirely unacceptable and shockingly commonplace behaviour.”

In the film, injustice at the hands of Calgary police officers is put under a harsh magnifying glass, revealing everything wrong with policing in Alberta, and dare I say Canada. It brings attention to the problematic relationships between Alberta’s police watchdog, the Alberta Serious Incident Response Team (ASIRT), the police departments they are tasked with investigating, and the Alberta Crown Prosecution Service.

“The issues of police brutality and accountability combine two of the great social ills of the human experience: the betrayal of trust by those in positions of authority and the failure of institutions to hold the powerful to account.”

“When we started to look into these issues in Alberta, almost by accident, what we found was deeply troubling — it’s not an easy topic by any means, but it’s something we felt compelled to pursue out of a fundamental interest in justice and equality,” said Serpa Francoeur and Uppal.

The documentary is being released after a United States police officer murdered George Floyd in a public execution, which sparked mass protesting in American cities. Police brutality is not just isolated to the United States however, as Canada also saw its fair share of Black Lives Matter protests and police brutality, particularly against Indigenous Peoples in the past few months.

Serpa Francoeur and Uppal continued by saying, “There is, unfortunately, a lot of overlap between the issues we see in the U.S. and here in Canada, an assertion that will likely not sound at odds with the lived experiences of our Black, Indigenous, and other racialized communities, as well as deeply marginalized populations like drug users and the unhoused, who bear the brunt of so much police misconduct.

“So many of the issues that we’ve been concerned about are precisely those that are now being widely debated in the public sphere.”

The film provides shocking data that will scare even those living in the furthest depths of Alberta. Some of this data includes numbers like the amount of fatal police shootings (by city) in North America.

When asked about what instigated the film, the filmmakers said, “We first began looking into policing issues in Calgary after learning of Godfred Addai Nyamekye’s experiences back in mid-2015, shortly after he had been acquitted of assaulting a peace officer following a three-day trial.”

The film explains that Godfred was detained, potentially unlawfully, by Calgary police in the early morning of December 28, 2013, a night that saw temperatures reach as low as -28 degrees with the windchill. After being handcuffed and thrown into the back of a police van, he was taken on what it is horrifically known in western Canada as a “starlight tour” and left in the middle of nowhere in the freezing cold. Godfred then called 911 for help. However, the officer who showed up brutally tasered and beat him, and then had Godfred charged with assaulting a peace officer. Despite a paucity of evidence, the Crown saw fit to proceed to trial. Although he was ultimately acquitted of the charges, Godfred’s life has never been the same and he deals with last trauma, both physical and psychological.

“Godfred’s incident was profoundly disturbing to us, seemingly riddled with what appeared to be very serious and malignant behaviour from the various police officers on the ground, the 911 operators responding to Godfred’s desperate calls for help, and even the Crown prosecutors who saw fit to drag this man through trial,” stated Serpa Francoeur and Uppal.

For the other incidents featured in the documentary, the filmmakers were not able to get interviews from the victims — not because they refused to comment, but because they’re not alive to tell their story.

Anthony Heffernan, a young man who struggled with substance abuse, was killed by police during a wellness check at a hotel. The hotel called the cops to check on him as they were unable to reach Anthony and he hadn’t checked out on time. The police arrived, forced the door open, and Anthony was then tasered twice and shot multiple times, leaving him dead on the floor of the hotel room.

“We do not have a just society if police can come to a wellness check, kick in the door, taser, and shoot an unarmed man four times. Once in the chest and three times in the head. Anthony was not a threat to anyone.

“This must never happen again in Calgary, or Canada,” said Patrick Heffernan, the father of Anthony Heffernan, a retired school principal from Prince Albert, Saskatchewan.

The Alberta Serious Incident Response Team (ASIRT) were then called in to investigate. It is worth mentioning that ASIRT has only recently filed charges against an officer for a shooting, despite the dozens of cases that they’ve investigated. Given the makeup of ASIRT, whose investigators are largely seconded officers on loan from the very departments that they are tasked to investigate, and even rely on the forensic teams at those departments, what is certain is that the optics regarding their independence is poor.

The other prominently featured incident is that of Daniel Haworth, who was brutally beaten by a Calgary police officer. Left with a fractured skull and a brain bleed, Haworth’s family see his death of fentanyl overdose less than a year later as very much connected with a permanent brain injury caused by the officer. It should also be noted that Daniel was not resisting or threatening the officer when he was repeatedly punched in the back of the head and then thrown head first onto asphalt — all while handcuffed.

Above the Law should be watched by everyone living in Canada, especially in Alberta, regardless of who you are or where you came from. It is a chilling indictment of police brutality, arrogance and racism. It shines a spotlight on the fact that there is no accountability – that no one is policing the police and that as in the case of George Floyd, without the real life videotape evidence provided by witnesses no one would believe that it even happens.

“We’ve spent the last five years researching and developing the film, with filming taking place over the course of several different production periods in 2018 and 2019,” noted the filmmakers.

But there has never been a more relevant time for its release. Police brutality, systemic racism and abuse of power against vulnerable populations are topics that are currently on the minds of every person across North America. The film documents anti-black racism, excessive force and lethal force during wellness checks – foreshadowing the very incidents that made the headlines these past few months.

George Floyd was murdered on May 25, 2020 in Minneapolis and a week later Chantel Moore, an Indigenous woman living in New Brunswick was executed by a police officer (who has not been named) during what was supposed to be a wellness check. A week after Chantel Moore was murdered, Rodney Levi was executed by police in New Brunswick. He too was killed during a wellness check — and again, the officer was not named. Some months prior, Athabasca Chipewyan Chief Allan Adam was brutalized by RCMP over an expired licence plate in Northern Alberta; Chief Allan was then charged with assaulting a police officer, which is an issue brought up in the documentary.

Since the death of George Floyd, calls to defund the police have been demanded across North America, with the City of Edmonton announcing an intent to reallocate $11 million dollars of a police funding hike.

“We never would have guessed five years ago, let alone five months ago, to what point the discourse would have advanced to by the time the film was being released.

“A concept like “defunding the police” could hardly have been further from mainstream, but in recent days, Edmonton announced an $11 million reduction to the police budget spread over two years, with those funds going towards supportive housing. This seems to us like a small step in the right direction of reevaluating how we are allocating resources and what exactly are the roles and expectations of police departments,” said the documentarians.

As for Marc Serpa Francoeur and Robinder Uppal’s future projects, they said, “We’re putting the finishing touches on No Visible Trauma, a feature-length companion to Above the Law that we plan to start distributing in the fall. While the same three narratives are central to both films, at more than twice the length, we are able to explore them in greater detail, along with some other horrific excessive force incidents at CPS, as well as some of the major cultural issues, including issues of bullying, harassment, and intimidation.”

A gofundme campaign has been started to help pay for Godfred Addai-Nyamekye’s legal fees, physiotherapy, emotional support. As of this writing the campaign has raised 10% of its goal of $35,000.

It is available to stream now on CBC Gem.

1 Comment on "Who Polices the Police? An interview with the creators of ‘Above the Law’"