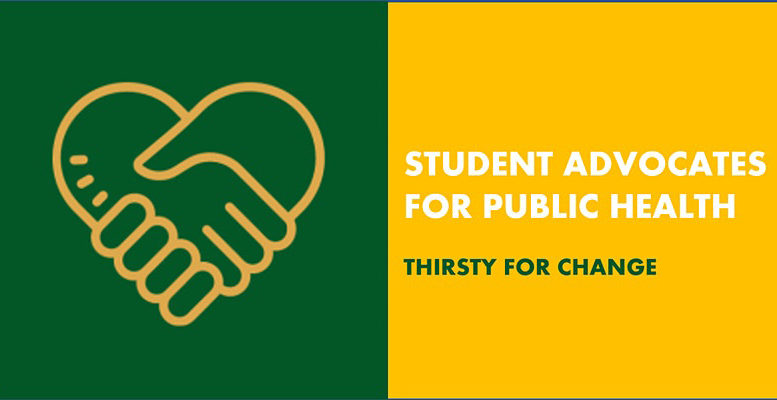 (ANNews) – A group of graduate students at the University of Alberta launched a campaign on March 22 — World Water Day — to pressure all levels of government to ensure all communities on Turtle Island equitable access to clean drinking water.

The campaign from the group, Student Advocates for Public Health, is dubbed “Thirsty for Change: No More Excuses.”

Although the federal Liberal government promised to end all long-term water advisories on First Nations by March 2021, there remain 29 communities that still don’t have access to clean drinking water, with no firm date for rectification in sight.

“Standing in solidarity today, we, like 97% of Canadians across this country, believe clean drinking water should be recognized as a fundamental human right,” group member Alexa Thompson said at the outset of the event.

“We believe the time for empty promises, failed action plans, and finger pointing has passed, and that the time for action is now.”

Sovereign Nations of Treaty No. 8 Grand Chief Arthur Noskey placed the issue of water contamination in the context of Indigenous environmental stewardship, borrowing a quote from the nations’ Elders.

“When the last tree has been cut down, the last fish caught and the last river poisoned, only then will we realize that we cannot eat money,” he said.

Noskey said it’s regrettable that First Nations had to pursue legal action in the form of a class action lawsuit to get the government to compensate them for having to endure contaminated drinking water.

Randal Bell, another student, said even though the government has lifted 128 water advisories since 2015, many homes in Indigenous communities depend on cisterns — large outdoor water tanks — for their water needs, which can easily get contaminated.

“Many families run out of water long before the water truck can replenish the supply,” said Bell.

Kylie Meguinis, a Tsuut’ina Nation band member, spoke of “how hard it was living with 10 people and having to consistently worry about running out of water.”

She expressed frustration that nothing has changed more than a year after going public about being forced to ration water, because a water truck comes to refill her cistern every four days.

She said she spends hundreds of dollars a week on bottled water and trips to the laundromat.

“Every bottle of water I buy means less food on the table,” Meguinis said. “It’s hard and it’s not fair, especially when my neighbours in the City of Calgary live less than five kilmotres away, have full access to clean drinking water, and never have to worry about running out or telling their children to be mindful of water usage.

“How is it we can build pipelines across the country for oil access but not five km away for water?”

Bell emphasized the impact of lacking clean drinking water on not just physical, but mental health, especially when the government demonstrates it’s not a major priority for them, leading First Nation peoples to feel “less important than other Canadians.”

“And then there’s the spiritual cost,” he added. “For many Indigenous cultures, water has been described as animate, a sacred gift from the Creator. Limited access to this sacred resource can have a profound effect on the culture and spirituality of Indigenous peoples.”

Kerry Black, an engineering professor at the University of Calgary, said for the past 20 years, we’ve known about the major, chronic health risks of contaminated water in First Nations communities, such as Grassy Narrows and Attawapiskat, and little has changed.

She said a “one-size-fits-all approach” to improving water infrastructure on First Nations communities has failed.

“There’s a lack of context and relevant solutions. We have slow approvals. We have misguided priorities for [people] outside of the community. We have a lack of community input, involvement, direction, colonial processes, lack of wraparound supports [and] chronic underfunding,” Black said.

Student Advocates for Public Health is calling on the federal government to update relevant legislation to “enshrine water as a fundamental human right for Canadians,” acknowledge Indigenous peoples as the first users of water in the country, and to collaborate with local, provincial and territorial governments to ensure Indigenous peoples’ water supply is protected.

Bell said he’s optimistic the agreement reached between the federal Liberals and NDP to ensure the government remains in power until 2025 in exchange for movement on some NDP priorities, including reconciliation, could lead to progress on the file.

“It’s a very promising step in the right direction,” Bell said, citing NDP leader Jagmeet Singh’s past remarks that if there were contaminated drinking water in Toronto, Vancouver or any other major cities, it would have been dealt with immediately.

“I don’t think you’d get a single political party coming forward to say they’re not going to support clean, safe drinking water for all Canadians,” she said. “It’s a huge question of how far they’re willing to go.”

Individual drinking water advisories are often left out of the equation when advisories on First Nations are discussed, with some communities having in excess of 100, she added.

“We are not capturing the true weight of the infrastructure crisis and I’m not sure that any political party can push that forward without collectively, all of us coming together to recognize this is an issue,” Black said.