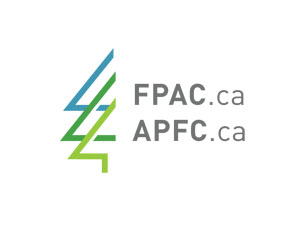 October 28, 2015 TORONTO – The Forest Products Association of Canada (FPAC) in partnership with the Canadian Council of Forest Ministers (CCFM)  awarded the Skills Award for Aboriginal Youth this week to Taylor Wale and Patrice Bellefleur.

Wale is a 22-year old woman from the Gitxsan First Nation studying Natural Resource Conservation in the Faculty of Forestry at the University of British Columbia, with the goal of becoming a professional biologist. Bellefleur, a 27-year old member of the Innu of Pessamit, will soon start his Master’s degree in Forest Science at Laval University with a long-term goal of helping to improve the integrated management of forest resources in his community. FPAC and CCFM wish to congratulate both winners on their impressive academic records and community commitment and look forward to their future accomplishments in the forest sector. 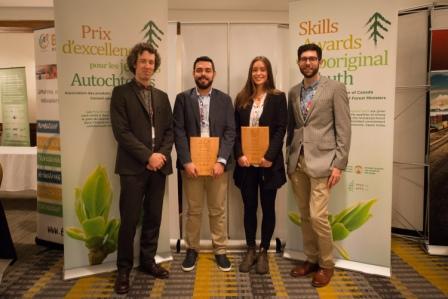 At a presentation at the Council for the Advancement of Native Development Officers (CANDO) national conference in Toronto, the two winners each received a $2,500 award and an I-Pad mini. The FPAC/CCFM Skills Award for Aboriginal Youth targets First Nations, Métis or Inuit individuals aged 18 to 30 who are enrolled in an apprenticeship program, college or university, with strong academic standing, and a demonstrated commitment to their field of study and a career in the revitalized forest sector.

“The forest sector benefits greatly from the hard work, enthusiasm and dedication of Aboriginal youth such as Taylor and Patrice,” says David Lindsay, President and CEO of FPAC. “Our industry is already one of the largest employers of Aboriginal people in Canada, and under Vision2020 we are committed to recruiting more young Aboriginals to work in the revitalized forest sector.

“As the Chair of the Canadian Council of Forest Ministers, I am very proud to support Patrice and Taylor as they move forward in their careers in the forest sector,” says the Honourable Scott Kent, Minister of Energy, Mines and Resources for the Yukon. “I am especially encouraged by their passion for this industry and their commitment to supporting the participation of Aboriginal communities in forest-based economic opportunities.”

“I was first attracted to forestry to learn more about sustainable resource management,” says Taylor Wale. “I’ve also come to learn the importance of dialogue and collaboration between First Nations and industry, and I am honoured to contribute to these improving relations.”

“I am deeply interested in Aboriginal forest governance,” says Patrice Bellefleur. “This award will help me complete my university education so I can support my community in managing its ancestral territory.”

The Skills Award for Aboriginal Youth builds on the FPAC Aboriginal Business Leadership Award which recognizes and celebrates Aboriginal entrepreneurs for success in a forest products business.

FPAC provides a voice for Canada’s wood, pulp, and paper producers nationally and internationally in government, trade, and environmental affairs. The $58-billion-a-year forest products industry represents 2% of Canada’s GDP and is one of Canada’s largest employers operating in hundreds of communities and providing 230,000 direct jobs across the country.