A documentary film about Treaty No. 9 by legendary filmmaker Alanis Obomsawin will premiere at the Toronto International Film Festival (TIFF) on Sept. 5, 2014.

The film is entitled Trick or Treaty? and it shines a light on one of the most important documents in the history of Canada’s First Nations tribes: the infamous Treaty 9, a 1905 agreement in which First Nations communities supposedly relinquished sovereignty over their traditional lands — a precedent that is routinely invoked whenever governments are challenged about rights issues involving First Nations communities. 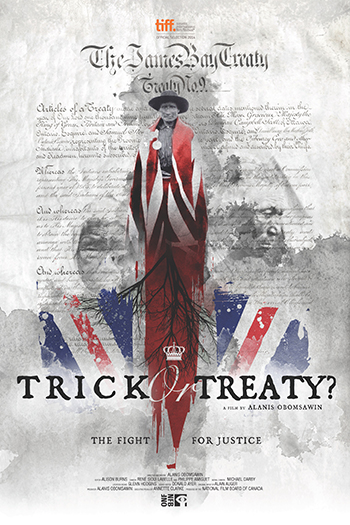 Against the backdrop of numerous key recent events, such as Chief Theresa Spence’s hunger strike and the rise of Idle No More and other youth-oriented Aboriginal movements, Obomsawin interviews a string of legal, historical, and cultural experts — as well as people whose forebears were present when the treaty was signed more than a century ago — about the corrupt genesis of Treaty 9. The deeper that Obomsawin digs, the more disturbing the revelations. It gradually becomes clear that the printed copy of the treaty is not the only valid version; even more startling, the First Nations signatories themselves were not able to see the written treaty until decades after the signing, and then in a language they didn’t understand.

Legendary Canadian documentarian Alanis Obomsawin digs into the tangled history of Treaty 9 to reveal the deceptions and distortions which “the real agreement” has been subjected to by successive governments seeking to deprive Canada’s First Peoples of their lands and rights.

The documentary Trick or Treaty? by Alanis Obomsawin follows the course of Indigenous leaders in their quest for justice and fairness as they seek to establish dialogue with the Canadian government. Their message is clear: Urgent action is needed. By tracing the history of their ancestors since the signing of the treaty, they want to raise people’s awareness about the issues that concern them now more than ever: respect for and protection of their lands, their natural resources and the right to hunt and fish so that their society can prosper.

One of the masters of Canadian cinema, Alanis Obomsawin has spent decades chronicling the state-sanctioned indignities and injustices visited on First Nations communities, creating a remarkable body of work driven by equal parts outrage and compassion. Her numerous documentaries comprise an alternative history of Canada’s Aboriginal peoples — markedly different from the “official” versions promulgated by governments and mainstream media, whose attitudes have ranged from neglect to racism.

As powerful, provocative, and important as any of her previous films, Trick or Treaty? once again demonstrates why Alanis Obomsawin is one of our most vital cinematic voices. A member of the Abenaki First Nation,  Obomsawin has directed over 40 films with the National Film Board of Canada, focusing on the lives and concerns of First Nations people. 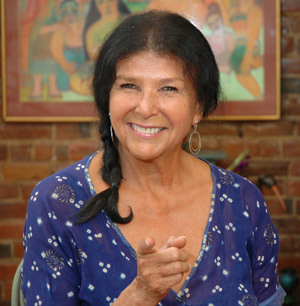 Alanis Obomsawin launched her career as a professional singer in New York in 1960. In 1967, NFB producers Joe Koenig and Bob Verrall invited her to come to the Film Board as a consultant for a film about Indigenous people. She wound up behind the camera herself, but continued to sing for humanitarian causes and went on to become a multidisciplinary artist.

As an activist filmmaker, Obomsawin is driven by a desire to give a platform to First Nations people in Canada. Her entire body of work bears witness to their experiences. From Christmas at Moose Factory (1971), which depicts life in a Cree village in James Bay as seen through children’s drawings, to Hi-Ho Mistahey! (2013), about the campaign to ensure that First Nations students have fair access to education in safe and comfortable schools, Obomsawin has tirelessly shown the importance of her roots, and the importance of intergenerational links in preserving North American Indigenous cultures.

Obomsawin is also an activist director who makes films about the pressing issues of the day, such as her quartet of films about the 1990 Oka crisis: Kanehsatake: 270 Years of Resistance (1993), winner of 18 international awards; My Name is Kahentiiosta (1995); Spudwrench: Kahnawake Man (1997); and Rocks at Whiskey Trench (2000).

Be the first to comment on "Trick or Treaty? documentary to premiere at Toronto Film Festival Sept. 5"