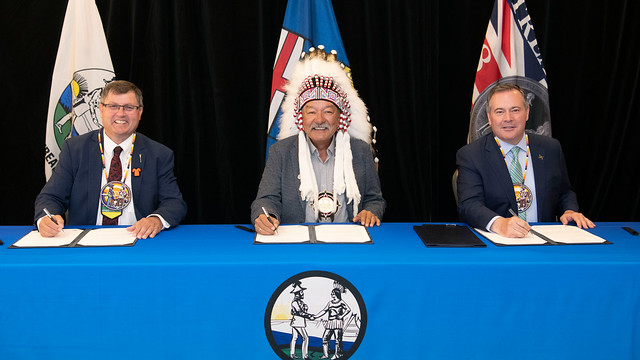 (ANNews) – Alberta’s government has renewed and expanded an agreement with the Confederacy of Treaty Six First Nations to strengthen their relationship through partnership and a shared path forward.

Upon signing the agreement Grand Chief George Arcand Jr, of the Confederacy of Treaty Six First Nations stated, “The importance of the relationship agreement with the Government of Alberta cannot be understated. It is more than just a document. It is a promise to communicate and collaborate in the spirit of respect and partnership with a focus on shared social priorities and economic prosperity, now and in the future. This agreement gives Alberta and the Confederacy of Treaty Six First Nations a way to have meaningful discussions while honouring the spirit and intent of the Treaty.”

Signing the relationship agreement reinforces a mutual commitment for the confederacy and Alberta’s government to address priority areas together.

“Since Day 1, Alberta’s government has been committed to rebuilding the relationship with First Nations through more than just words – what Chief Littlechild calls reconcili-action,” added Premier Kenney. “This means that we will work closely with Treaty 6 partners to live up to the promise of the treaty and ensure that all communities thrive together.”

The agreement includes discussions on land and resources, health care, education, justice and policing, economic development and urban reserves, culture and tourism, emergency management, reconciliation, family services, and housing. It will also include assisting with mental health, addictions, and the opioid crisis.

In July 2019, cabinet approved a mandate for Indigenous Relations to pursue a protocol agreement with the Confederacy of Treaty Six First Nations. The confederacy signed their inaugural Protocol Agreement on Dec. 16, 2020.