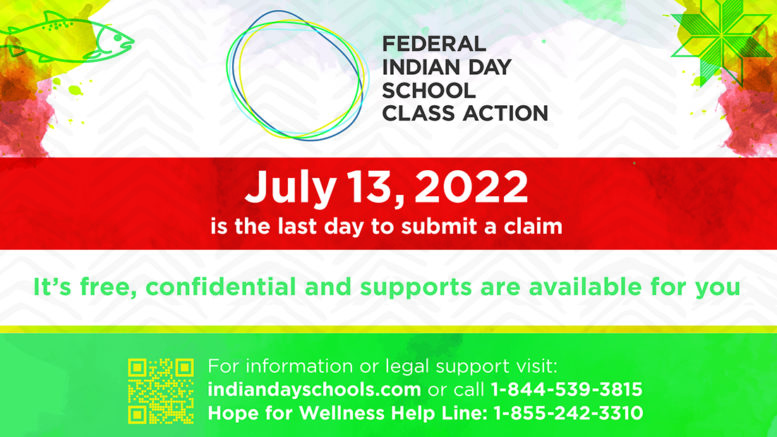 “Federal Indian Day School survivors and the families of deceased survivors are becoming increasingly distressed at the fast-approaching deadline as they feel their issues and concerns regarding the claims process are being ignored by the federal government,” said Grand Chief George Arcand Jr.

The claims process opened in January 2020 and the deadline to submit a claim for compensation under the Federal Indian Day School Class Action Settlement is July 13, 2022. In 2019, the federal government signed a $1.47 billion settlement with thousands of former students of the federally funded day school system which was separate from the residential school system.

Nearly 700 day schools operated across Canada from 1863 to 2000 and it’s estimated some 200,000 Indigenous children attended these schools, many of them were forced to attend.

“These crimes of genocide were inflicted on many nationalities, however the First Peoples are the only human beings who must relive their traumas through an application process so the government can “measure the trauma” they suffered in these schools,” states the First Nations in a  press release. “This action perpetuates Canada’s continued discriminatory and dehumanizing practices on our citizens.”

The bureaucracies within the federal and provincial governments and religious organizations have not released these records and data, said Sovereign Nations of Treaty No. 8 Grand Chief Arthur Noskey. “We require this information to support our citizens in the claims process to ensure no one is missed. How can you have ‘Reconciliation without the Truth’ when these records have not been released.”

Many survivors have expressed concern that schools they attended were not included in the eligible schools list and some are receiving lower levels of compensation and being deprived of the ability to appeal the amount when they acquire additional proof or remember events.

The leaders of the G4 Nations of the Bearspaw, Chiniki, Goodstoney and Tsuut’ina of Treaty 7 are in full support of the Grand Chief’s call for quick action by the federal government.

“Together we add our voices to those of other First Nation leaders calling for the federal government to take the necessary steps to extend the deadline for the Federal Indian Day School Class Action and address the additional concerns brought forward by survivors,” conclude the First Nation leaders in the press release. “We require this information to support our citizens in their claims process to ensure no one is missed.”

Be the first to comment on "Treaty 6, 7 and 8 First Nations join the call for an extension to submit Day School Settlement claims"