The Truth and Reconciliation Commission’s (TRC) seventh and Final Event opened at the Shaw Conference Centre on March 27 with more than 9,000 participants filing through the doors and into the three levels of halls and sessions rooms. It ended on March 30 when an estimated 4,000 Aboriginal citizens and their supporters took part in an ‘Honour Walk’ from the Jasper Avenue venue to the Alberta Legislature. 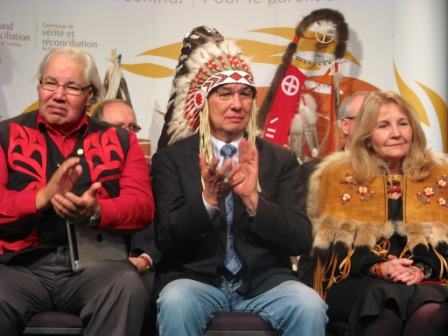 The active schedule that took place during the four-day hearings included a visit from more than 2000 school children representing over 100 schools, who participated during the Education Day portion of the event. The education sessions, delivered without graphic or traumatic input, were designed to ensure that school-aged children were able to understand the history of the 139 schools that were built to house Aboriginal children in a misguided attempt to assimilate them into western culture by removing them from their families, their culture and their languages.

Scavenger hunts, artistic workshops and traditional games took place throughout the day as students from Edmonton’s Catholic and Public School systems participated together with their rural-residing counterparts.

Alberta had more residential schools that any other province. There are still more than 80,000 survivors alive in Canada today; 12,000 live in Alberta.

TRC Commissioners Justice Murray Sinclair, Chief Willie Littlechild and Dr. Marie Wilson and a host of speakers gathered on the main stage to address the thousands who sat and awaited their opening 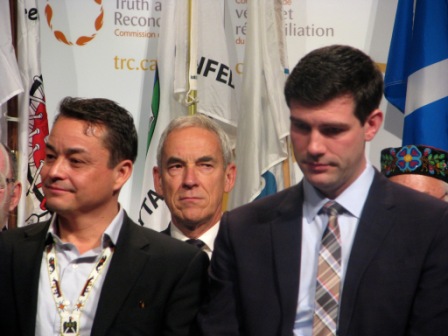 Justice Sinclair talked about the importance of families raising their children and teaching them to have a respect for others; he talked about the marginalization and segregation that Aboriginal people have faced in Canada for the past 200 years and more. 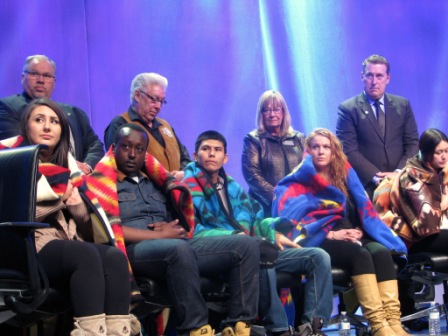 Sinclair talked about the work the Commission has done over the past four years, what they learned and what they intend to do now that the Final Event hearing has been concluded.

“We (Commissioners) have travelled together and visited with more than 560 communities,” he said. “We will now sit down and prepare a report based on the foundation of the evidence, or the truth, as we have come to know it. What do we do about this?”

The immediate plan is to meet with interest groups to determine what to say and what road to take when it comes to reconciliation. The Commission will offer recommendations about ways to educate the general public about what happened as a result of the Indian Residential School system. It will also offer recommendations about improving social programs and conditions for Canada’s Indigenous population. He said the Commission has learned that Aboriginal Canadians “have the highest suicide rates in the country; education is still failing them, child welfare rates are incredibly high” and the list goes on.

Justice Sinclair said that for the most part the Commission “has accomplished what it set out to do,” it has helped some victims gain closure, it has awakened an interest in Canadians that until now has been dormant.

He said the Commission has also made it clear “that the era of denial is over.”

AFN Regional Chief Cameron Alexis said that though the Edmonton event was billed as being “the Final Event,” nothing could be further from the truth.

“There is no such thing as final,” he noted, “at least not yet. We have to continue to work together to shape our future and to come to a point where we live together in peace, harmony and understanding – just the way the Creator meant it to be.”

“This city, this region,” noted Mayor Iveson,” is not 200 years old; it is 8,000 years old. Edmonton has undergone numerous name changes over the decades and centuries but it was  once a thriving Aboriginal settlement.” He pledged to continue “what former Mayor Stephen Mandel started,” and that is “to continue working to improve our relationship with Aboriginal partners and community members. Edmonton is fully committed to the Accord established by Mr. Mandel and we’re just getting started.”

Xat’sull (Soda Creek) Chief Bev Sellars told the gathering that “this conference isn’t just about survivors, it’s also about the next generation, it’s about creating a dialogue, it’s about healing, it’s about understanding and developing ways to overcome the past. It is important that we realize the errors of the past and work together to move ahead. The negativity is slowly disappearing as we begin to return to our communities and cultures. As we become more and more successful the stereotyping is beginning to disappear. It is important for us to get back to our roots, back to our communities, back to our cultural and traditional way of life that embraces fishing and hunting and gathering berries and medicine.

“The children who attended the schools had no choice and they didn’t think about how it was affecting them; only after many years do you realize the calamity, the social chaos that was created by trying to beat the Indian out of us.”

In 2012 Chief Sellars released her best-selling book: They Call Me Number One, a full length memoir of her recollection, and the recollection of three generations of women who were forced to attend St. Jospeh’s Mission school at Williams Lake. Chief Sellars spent her childhood in a church-run residential school whose aim it was to “civilize” Native children through Christian teachings, forced separation from family and culture, and discipline. At the age of ﬁve, Sellars was isolated for two years at Coqualeetza Indian Turberculosis Hospital in Sardis, British Columbia, nearly six hours’ drive from home. The trauma of these experiences has reverberated throughout her life.  She tells of hunger, forced labour, and physical beatings, often with a leather strap, and also of the demand for conformity in a culturally alien institution where children were conﬁned and denigrated for failure to be White and Roman Catholic.

“One of the most important things lost at the schools,” she noted, “was the loss of our languages; languages that need to be revived.”

The TRC’s Final Event hearing in Edmonton drew more than 30,000 victims, conference participants, spectators, school children and dignitaries from every level of government, Aboriginal, provincial and federal. The halls and salons that accommodated the sessions, panels, sharing circles, film presentations, displays, listening circles and private statements were filled to capacity for every scheduled event.

Closing remarks indicated a sense of accomplishment. In fact, from the first welcoming comments on opening day to the last moments of the closing ceremonies and along the three-hour Honour Walk to the legislature, participants felt a sense of relief and they expressed it with comments that included: “I feel I have learned a great deal here; I think this will give me some closure; I feel like a load has been lifted from my shoulders; this is the first time I’ve heard other people talk about what happened to them in the schools; I felt the same pain as I’m hearing here today but for years I thought that I’d done something to deserve being punished so much; it was busy and it was crowded at times, but I guess that means the conference was a success because the people came out to participate and to learn; I know I did.”

Regional Chief Alexis thanked those who attended the TRC hearings. He said, “You, as families, clans and community leaders, have the vision, the knowledge, the wherewithal and the experience to help us pave our way into the future. You are truly our greatest asset today and tomorrow and we could not accomplish what we dowithout your participation. Thank you for attending.”

“It was truly a remarkable event, one that will surely be long remembered by those who came here this week to participate, to offer insight, to speak, to listen and to take part in one or more of the many sessions that were made available in an effort to help Aboriginal people heal and non-Aboriginal people learn about the Indian Residential Schools and the damage they did to Indigenous peoples while the world sat by and did nothing,” noted Elder Paul ‘Mickey’ Redcrow, just minutes before the four day-long TRC hearings came to an end.

“It is difficult to forget the past and it is difficult to forgive those who did us such harm, but I think if the Commission does what it says and creates a report with recommendations that are acted upon, and then works to get this information into the school books so that future generations will not be so quick to condemn, healing will inevitably take place.”