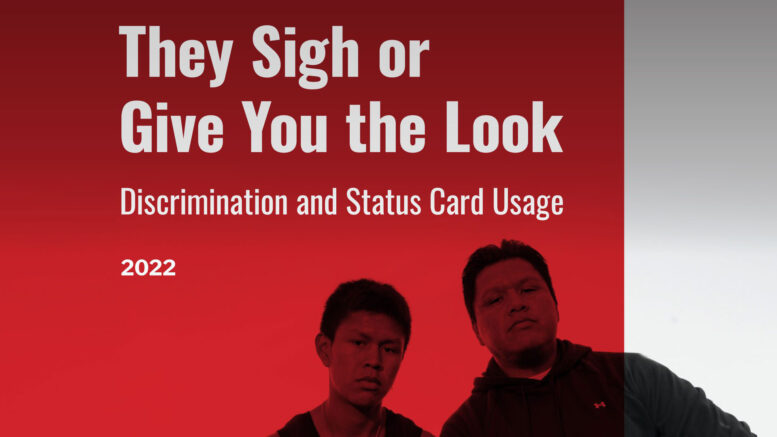 (xʷməθkʷəy̓əm (Musqueam), Sḵwx̱wú7mesh (Squamish) and səlilwətaɬ (Tsleil Waututh)/Vancouver, B.C. – Indian status card holders face stigma and discrimination on a daily basis when presenting them at stores or to officials, according to a landmark study commissioned by the Union of BC Indian Chiefs.

The full report is titled “They Sigh or Give You the Look: Discrimination and Status Card Usage” and was prepared using a comprehensive methodology to inform recommendations for government, businesses, and the media.

The decision to commission the study stemmed from the unlawful arrest and detention of Maxwell Johnson when he and his granddaughter presented their federal status cards to open a bank account.

Grand Chief Stewart Phillip, UBCIC President, stated “Status cards have long been the prime catalyst for the public expression of ongoing racism and stereotyping of Indigenous peoples. The media and schools have failed to educate people on the history of status cards and why First Nations peoples have them. These results will help us to begin educating Canada so that no grandfather and no granddaughter need ever suffer violence when lawfully going about their business.”

The findings show discrimination is a near-universal experience amongst status First Nations individuals who have used their status card. This experience is traumatic, particularly for those experiencing other compounding and overlapping forms of oppression, and shapes people’s behaviour for a lifetime.

The report also underlines the ways that traditional and social media portray status card usage as a platform for anti-Indigenous racism.

“I will never forget being handcuffed and seeing my grand-daughter standing on the street, crying and handcuffed,” stated Maxwell Johnson.

“She was 12 years old, and we were just trying to open a bank account for her.  We both have to live with this trauma and the fears caused by it including what could happen the next time we show our Indian status cards. UBCIC’s report is an important step forward to revealing the discrimination Indigenous peoples experience every day.  I want to see governments and businesses step up to learn, educate, and eliminate this kind of discrimination.”

“The burden of educating people on status cards is unjustly on First Nations people when the government has been negligent in providing the proper and relevant resources to educate public service workers and the public about the legality and legitimacy of status cards as government-issued identification,” stated Chief Marilyn Slett, Heiltsuk Nation. “The end result is unacceptable and traumatizing incidents like those of Mr. Johnson and Tori-Anne who merely wanted to do some banking.”

“Using a literature review, media analysis, online survey, and behavioural fieldwork, the study uncovered a near-universal experience of discrimination amongst status First Nations who have used a status card,” said Harmony Johnson, the report’s author, “Although this is an issue we all know about, there were no existing studies available. That excuse no longer exists.”

Be the first to comment on "Study: Indigenous people face racism when using their Indian status cards"