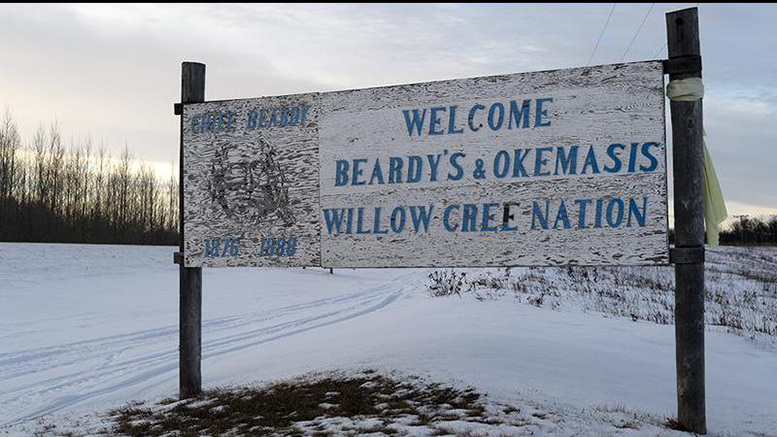 (May 2020) – “These are First Nations lands. This is Indian land. Stay off our lands unless you are invited,” declared Chief Bobby Cameron, the Federation of Saskatchewan Indigenous Nations, in an article by the National Post.

On Sunday May 10, 2020 RCMP were dispatched by the Canadian Government to enforce the Federal First Nation and Inuit Health Branch’s decision to shut down an illegal (as seen in the eyes of Canada) Sundance being held in the Beardy’s and Okemasis Cree Nation, which is located about 90km Northeast of Saskatoon.

The idea to put up a Sundance during this uncertain time allegedly came to an Elder in a vision. “We were doing this, not only for our communities and our loved ones, but we were doing this for all of mankind,” Clay Sutherland, lead organizer of the Sundance said. “We did not expect to get a pushback from the government. We did not expect all these things to happen.”

If you are unaware of the situation or want to learn more about it, here is a timeline of the events:

–     Wednesday March 25, 2020: Global News reports Saskatchewan Government plan to limit size of groups from 25 to 10 people in a single room.

–     Date Unknown: Sundance Organizers granted permission by the Beardy’s and Okemasis Cree Nation’s Chief and Council to host the Sundance, despite the social distancing law and only with the exception that the organizers follow rules and restrictions set by the Cree Nation themselves. The restrictions included:

– Access only granted to non-band members after a temperature check and an advisory to self-isolate for the following two weeks.

–     Friday May 8, 2020 (Evening): The Federal First Nation and Inuit Health Branch notifies the Nation’s Chief, directing the Nation’s governance to shut down the ceremony. Chief and Council allow Sundance to continue.

–     Sunday May 10, 2020: 2 RCMP vehicles arrive at the Sundance with firearms on their person–the specific amount of officers is unknown. Clay Sutherland, head of the Sundance organization, tells RCMP that weapons are forbidden in the sacred area.

“I told them firearms and RCMP are not allowed on these grounds. I didn’t want to be confrontational, basically because of RCMP, guns and the history of native people. They don’t have a good history,” Clay Sutherland stated in an article by the National Post. The RCMP officers then left but returned sometime later to harass and confront an unknown person before finally leaving again.

The Sundance continued and no charges or tickets were made.

CBC News also reported on the matter in a separate article:

In a written response, Saskatchewan RCMP acknowledged officers went out to the site twice but said they never asked for the ceremony to stop. No charges were laid.

Requests for comment from First Nations and Inuit Health have not received a response.

Andre Bear, a Dancer and Law Student who acted as a legal observer during the situation, stated in the National Post article: if there were real concern for the community’s health, the federal government should stop “detrimentally underfunding” health care and supplies like personal protective equipment for Indigenous people.

Be the first to comment on "RCMP Shut Down Saskatchewan Sundance: A Timeline"