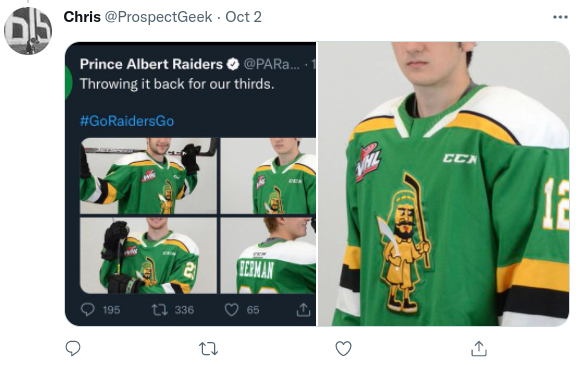 The Prince Albert Raiders recently unveiled a third jersey that contained a racist logo from its past. Although it was removed following some complaints, one has to wonder who thought it was acceptable to begin with.

(ANNews) – On October 1, 2021, the Western Hockey League (WHL) was rocked by controversy when the Prince Albert Raiders, a franchise with 38 years of history, unveiled a third jersey from its storied past. The jersey, sporting the usual green and white, included an eye catching, and distasteful logo on the front.

The logo, an homage to one of the team’s originals, depicted a bearded Middle-Eastern man, with traditional garb and a scimitar. An image that can only be met with shame and embarrassment at how disrespectful it is to people from the Middle East. Upon announcing the third jersey design, the team almost immediately removed the announcement tweet due to community outcry.

Springing into full damage control, the WHL and Raiders released a statement a few days later recognizing “the dated design is insensitive and offensive.” Adding fuel to the issue was the fact that seven years ago the team introduced the “Boston Raider,” an equally offensive mascot based upon the logo.

Alberta Native News reached out to Anti-Racism Expert, and lead of For the Growth of the Game initiative, Irfan Chaudry for his perspective. Chaudry told ANNews, “The logo, passing through numerous levels of approval, reflects a presence of unconscious bias in the hockey community, and a real lack of diversity in the leadership of the Prince Albert Raiders.”

A problem he has seen in the hockey community and culture for some time. A problem that served as the driver for the creation of his initiative at MacEwan University.

This recent decision was built upon the problematic logo being used as a full-time third jersey from 2006-2008, and later on in shoulder patches in the 2010s. During this time, Edmonton Police Service (EPS) Chief Dale McFee, an alumni of the Raiders, served on the board of directors and as President of the WHL club.

Chief McFee held that position for a decade before resigning when current president Gord Broda took over.

ANNews reached out to Chief McFee to gain reaction to the logo, and to clarify the decisions and discussions that took place when the same logo was approved in 2006 and into his tenure of the 2010s.

The media relations department with EPS responded that “Chief McFee is booked up this week and is unable to speak to this.”

Chaudry stated, “I will give the benefit of the doubt to leaders like Chief McFee, but it is important for people who had led organizations like the Raiders to speak out about their own personal growth, and why images like the logo used are problematic.”

A push for personal and organizational growth has been initiated within the WHL and individual clubs over the past few years. In 2020, the Moose Jaw Warriors announced a formal review of their primary logo. Although the questionable logo appears on the website and some branding, the on-ice product appears to have shifted to utilizing an updated logo reflecting the city in a direct way.

Similarly, following the push for increased awareness of harmful logos with Indigenous mascots, the Portland Winterhawks unveiled their new brand and identity in July 2021. Moving beyond the original logo, which has a close resemblance to the Chicago Blackhawks of the National Hockey League (NHL), the club decided to move in a different direction with images that link the franchise to the Portland, Oregon area.

These examples of progress directly clash with the decisions made recently by the Raiders organization, and the response to questions falls a little flat. In order to address the issues and properly identify why the logo is wrong, Chaudry said, “It is fair to expect an authentic response from the WHL and others, rather than trying to shuffle the issue under the rug.”

In the end, many agree that there is a real lack of diversity in hockey, specifically in the West, and if groups like the WHL and others want to grow the game more, direct action is required. Chaudry closed with “For something like that [the logo] to happen in 2021, it boggles the mind, but I am not really surprised.”