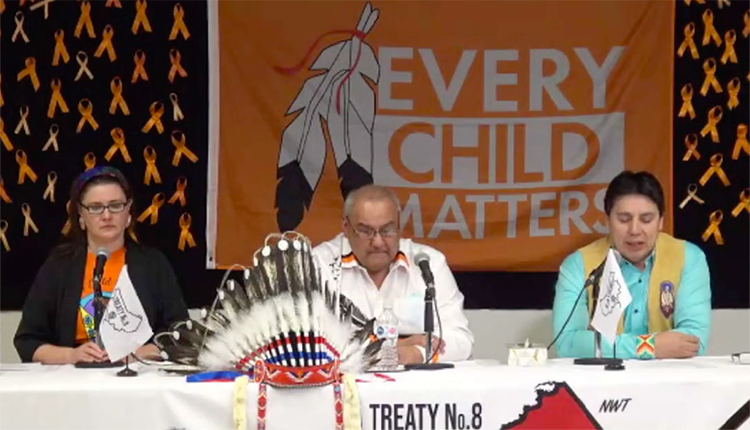 (ANNews) – As the grief once again begins to settle in First Nations and Metis homes, they are given another collective shock with today’s announcement by the Kapawe’no First Nation. Following preliminary engagement with Elders and survivors of St. Bernard’s Indian Residential School in August of 2021, the Institute of Prairie and Indigenous Archaeology (IPIA) conducted initial examinations of grounds surrounding the former institution. Utilizing industry established processes involving ground penetrating radar (GPR) and overhead examinations, the IPIA and leadership from Treaty no. 8 unveiled their grim findings to the world.

This initial phase, of a three phase process, uncovered 169 potential graves at various locations throughout the one acre examination area. According to the summary findings released, the areas examined include a root cellar, church area, the former Nuns’ dormitory and community cemetery. While the majority of anomalies have been located in the cemetery grounds, troubling anomalies were located in areas that are not expected to hold burials. Locations such as root cellars and dormitory grounds do not usually hold burials, unless, as we continue to learn, those grounds are located near residential schools.

Throughout the press conference, Chief Sydney Halcrow, Grand Chief Arthur Noskey and Dr. Kisha Supernant verified the work undertaken, emphasized the tragic circumstances at the institution and committed to carrying the work forward. They jointly reiterated that the discovery of one grave is tragic, but a number of 169 is unfathomable. They also conveyed the number of supports available to survivors and the importance of community support as truth after truth is uncovered. Visibly shaken by the discovery and announcement, each took turns sharing their personal connection to the school and its negative impact on Treaty no. 8 as a whole.

Missing from the press release, speaking points and revelations was any recognition of the operators of the institution, their role in this tragedy and responsibility for the trauma caused. It has become a well known fact that these institutions were not operated by the government, but rather religious groups. In the case of St. Bernard’s, the National Centre for Truth and Reconciliation (NCTR) classifies it as a Roman Catholic mission. This difficult truth is also reflected in the name of the nearby community, named after one Bishop Émile Grouard. So for this fact to not be mentioned, the role of the church emphasized or the only reference to any religious involvement was a thank you message to Canadian Conference of Catholic Bishops (CCCB), it may leave survivors and descendants with mixed feelings.

Furthering these mixed emotions, and adding to the trauma, is problematic rhetoric and reference to the “children being in the presence of God”. Initially shared by Grand Chief Noskey in June of 2021 following the confirmation of remains at the Kamloops Indian Residential School, these utterances send a chill down one’s spine. These statements are troubling for many reasons, but most notably is the fact that before 2007, the Pope and Catholic Church confined those who died unbaptised to the religious realm of limbo. This policy, which was in place during the residential school era, necessitated that unbaptized individuals be buried outside of cemetery grounds and without a proper burial rite.

As discovery after discovery continues, there should be a more fulsome conversation within our communities regarding the conflict of belief systems, and whether comments and references to God do more harm than good. As a survivor of intergenerational trauma directly connected to St. Bernard’s and its neighbouring institution St. Bruno’s, it gives the writer little solace to know that children, who were taken before their time and not afforded the chance to life are residing with “God”. It becomes even more difficult to comprehend these statements when those who placed these children in the ground, or worse, carried out their death, were those preaching the word of God.

These are the difficult truths and realities we are faced with each time there is an announcement regarding more graves and lost children. Difficult truths and realities that are necessary, but must be carried out with all those affected in mind, and with the ultimate goal of continuing to hold the Church and State accountable as equals in genocidal acts. Only then will we truly be sharing the truth, and ensuring all parties carry the burden of reconciliation, and not just Indigenous communities.

Be the first to comment on "Preliminary Findings announced at St. Bernard’s Residential School"