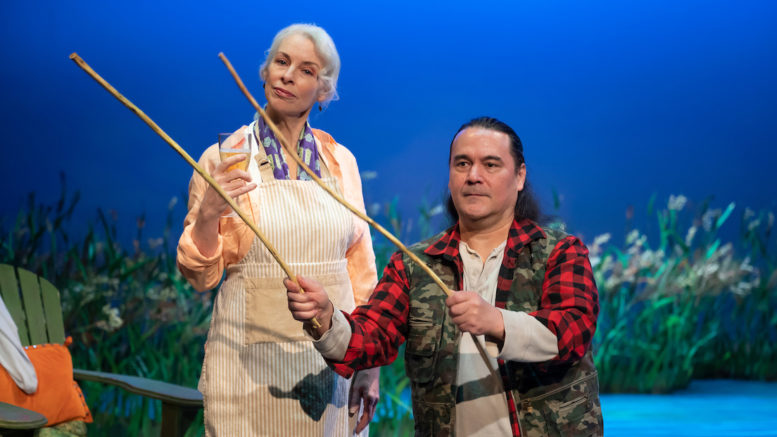 Trevor Duplessis and Davina Stewart give stellar performances in Shadow Theatre's 'Cottagers and Indians' at the Varscona Theatre in Edmonton until March 27 (Photo by Marc J. Chalifoux Photography).

(ANNews) – Cottagers and Indians, a stage-play from award-winning playwright and novelist Drew Hayden Taylor, is currently being shown at the Varscona Theatre in Edmonton from now until March 27th.

The play is about an Indigenous man who begins to plant wild rice on lakeshores near his Nation’s territory, much to the dismay of cottage owners whose houses overlook the waters. What ensues is a smart and honest dialogue on land rights and colonization, with many laugh-out-loud moments scattered throughout the political-comedy.

Arthur Copper, the Anishnaabe man responsible for planting the wild rice, is played by Trevor Duplessis, who delivers a fantastically raw and incredibly hilarious performance in Cottagers and Indians. He is best known for the film In a World Created by a Drunken God and the TV series Blackstone.

Opposite of Duplessis — representing those of the cottagers — is the ever-so charming Davina Stewart, who plays Maureen Poole. Stewart is a graduate of the U of A’s BFA Acting program and has been acting since 1986. Her most recent work includes the critically acclaimed one woman show Woman Caught Aware, although she has been in many productions over the span of her 35 year career.

The two actors, who have great chemistry with each other, show the audience what two great artists can accomplish with just a stage and some lights.

However, credit must also be given to the real-life man who helped inspire Cottagers and Indians: James Whetung of the Curve Lake First Nation, who attracted media outlets after he began reseeding Pigeon Lake, Ont., with Black Duck Wild Rice some years back.

Much like in the stage play, Whetung was met with push back from cottage owners who believed he was only bringing down property values and creating safety concerns.

Whetung’s story became Cottagers and Indians when Taylor was approached by a colleague to realize its dramatic potential. And since its inception, the play has travelled from Ontario to Saskatchewan, with Taylor even releasing a documentary of the same name.

In an interview with the Edmonton Journal, Taylor said of the story, “My first reaction was, ‘What’s interesting about a bag of wild rice?’ But Richard said it wasn’t just that. The story had the basis of all theatre —— character, motivation and action.”

Then when describing his intent behind presenting these issues of ownership alongside large amounts humour, Taylor said, “I ran into a man on the Blood Reserve in Alberta and he said that for Native people, humour is the WD40 of healing. I loved that.”

“I wanted to heal that trauma that’s in our community and in our writing. I decided to play to my strength and to embrace and celebrate the humour in our culture.”

“Usually, at the end of each performance, the stage manager writes down the length of each act. When there is a specifically Indigenous audience, each act is four to five minutes longer because of the laughter,” said Taylor.

A free performance for Indigenous people is taking place on Sunday March 20 at 7:30 pm. Contact Shadow Theatre for tickets.

Be the first to comment on "Play Review: “Cottagers and Indians” – at the Varscona Theatre in Edmonton until March 27th"