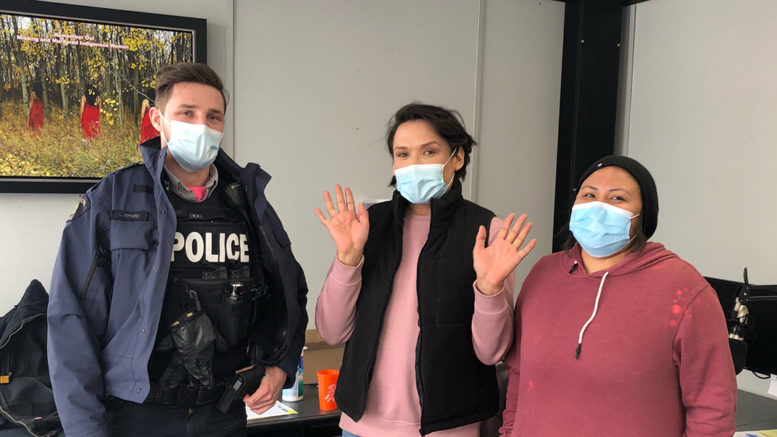 (ANNews) – Pink Shirt Day was hosted on the top radio segment on Hawk Radio with DJ, Michelle Louis by Ermineskin Women’s Shelter in partnership with Maskwacis RCMP on February 23, 2022.

“We have a segment on Hawk Radio where [representatives from] Ermineskin Women Shelters come in and talk about Family Violence, Domestic Violence, and issues that impact First Nation communities,” said Michelle Louis, DJ for Hawk Radio in Maskwacis, Alberta. “Today, we were talking about Anti-Bullying for Pink Shirt Day.”

Louis added, that she was very impressed with her guest speaker, Eleigsha Ermineskin who is a youth from Ermineskin who came on her show to talk about Cyber Bullying.

Louis explained, “Ermineskin is a young girl; what made me proud and happy for her was how she said, hurt people, hurt People. Ermineskin had to realize where these people were coming from, and how they were brought up and what they are going through and instead of pointing fingers – Ermineskin  was showing empathy.”

Anti-Bullying Day is an annual event, held in Canada and other parts of the world, where people wear pink-coloured shirts to stand against bullying.

The initiative was started in Canada, where it is held on the last Wednesday of February each year. In New Zealand, Anti-Bullying Day is celebrated in May.

“I spoke on Hawk Radio about anti-bullying. I am against all community bullying,” said Honourable Cree Elder of Maskwacis, Lillian Gladeau (spoken in Cree and translated into English.) “We see it every day! People argue in stores and at events. People swear at each other and say negative things to one another. Growing up we were not raised that way. If you have kids or grandkids it’s your responsibility to teach them to raise them good.”

“We do several events in the community, such as Pink Shirt Day and the upcoming International Women’s Days,” said Esther Roan, Outreach Worker at Ermineskin Women’s Shelter (EWS).

“We are here to talk about bullying and spread education that way. I have been bullied throughout my education. I have been beaten up, all sorts of stuff and bullied, all that classic stuff and it hits home so that’s why it’s so important to me,” said Constable Colin Efford, Maskwacis RCMP Community Policing.

Constable Efford has a message for youth, “Just be nice It’s not worth it to be mean, it takes too much energy, and life is better when you’re happy,”

“I came on air to talk about cyberbullying. I was cyberbullied, people made fake accounts, and they would tell me to go kill myself, and make threats that they would attack,” said Eleigsha Ermineskin, Ermineskin Youth.

“How I dealt with it was that it’s so easy to believe that stuff and give into it or feed into it. Stay strong! You gotta understand it’s online and not real life – but always report them!”

Outside of my role as a reporter at Alberta Native News, I am a very outspoken anti-bullying advocate. I have raised the issue of anti-bullying for the last 10 years. In recent years, as an advocate for the rights of Indigenous people and LGBTQS2+,  I have become a target by haters and mean-spirited people – both online and in-person.

I have spoken at many anti-bullying conferences throughout Alberta and throughout the Indian Country. My anti-bullying movement called “Hate to Hope,” comes from a hateful incident that happened back in 2012 when I was accosted and attacked while a student at the University of Alberta.

At the time I moved away from the comfort of my family and small community roots in Central Alberta.  As a student at the university, I also became a very successful makeup artist and start learning about different gender identities.

But throughout my life, I’ve been a victim of other people’s bitterness but thanks to my upbringing and the way I was raised – I turn that negativity into something positive.

Life is full of ups and downs. Sometimes life doesn’t go your way and things happen that are out of your control. The only thing you can control is your response to the situation. So, never give up on yourself and keep on going! Everyone has value, we all have people who love and care for us and everybody deserves love and respect.

If you are a youth experiencing bullying call Bullying Helpline: 1-888-456-2323 to get help anonymously in more than 170 languages or find other supports.

For Adults who face workplace bullying, cyberbullying and harassment visit the website: Canadian Website on “Cyberbullying can be against the law.”

Chevi Rabbit has a monthly segment with Michelle Louis on Hawk Radio Called Talks with Rabbit. The radio station is located on the third floor of Samson Cree Nation, Administration Building.